The Nature Conservancy has belatedly installed the crown jewel of its ecologically friendly state headquarters, which opened in downtown Indianapolis more than a year ago. 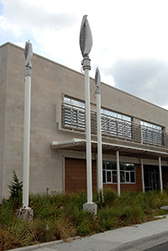 The Nature Conservancy is using wind turbines to generate some electricity at its eco-friendly Indianapolis headquarters.(IBJ Photo/ Perry Reichanadter)

“That was kind of the last big piece of construction,” said Adam McLane, director of operations at the not-for-profit.

Downtown isn’t typically as windy as rural Indiana and the turbines are relatively close to the ground. So the three turbines might not generate more than about 8,000 kilowatt hours of electricity a year. That’s about 3 percent of the total annual electric use at the $5.7 million building known as the Efroymson Conservation Center.

“I’d say for us it’s about education, as well,” said McLane, noting the conservancy conducts frequent tours to demonstrate environmentally friendly building features and to inspire others to adopt them.

The three, helix-shaped turbines were selected in part because they’re easier for birds to see and avoid. The units and their battery storage system cost about $30,000. The system was funded by a gift from Kay F. Koch, a long-time supporter of the conservancy along with her late husband, Brian B. Molloy.

Wind turbines are still few and far between in Indianapolis. Keep Indianapolis Beautiful installed one when it opened its new headquarters several years ago at 1029 Fletcher Ave.

Vertical wind turbines also can be seen outside the headquarters of Johnson Melloh Solutions and at the International Brotherhood of Electrical Workers training institute, both along Interstate 465, east of Indianapolis International Airport.

In addition, in 2008 calendar publisher The Time Factory erected a 44-foot diameter propeller-style turbine to power its facility near 62nd Street and Georgetown Road.

Wind power is mostly the province of private firms in the northern half the state, in places such as Benton, Tipton and White counties. These firms typically sell the power to electric utilities.

The conservancy’s Indiana headquarters also spouts a number of other green features, including a geothermal HVAC system and passive solar lighting.

“We use 43 percent less energy than traditional construction,” McLane said.

The Efroymson Conservaton Center also has a 2,500-gallon tank in the basement to store rainwater drained from the roof, for use in toilets and irrigation.

The rain garden in the front yard contains native plants that help soak up water and eliminate runoff into the city’s sewer system.