Lenders are attempting to foreclose on The Broadbent Co.'s downtown headquarters as part of a $25 million federal lawsuit against the Indianapolis-based real estate developer.

The Huntington National Bank and PNC Bank filed the complaint in U.S. District Court in Indianapolis on July 22, charging that Broadbent defaulted on various construction loans and mortgages dating from February 2007.

Broadbent, a strip-center real estate specialist, borrowed money to buy and renovate its headquarters at 117 E. Washington St. The company moved into the structure, formerly known as the Zipper Building, in October 2007 after a massive renovation project overhauled the 50-year-old building. 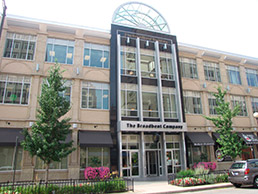 Broadbent did an extensive renovation on its downtown headquarters. (IBJ Photo/Andrea Muirragui Davis)

But the company has struggled during the downturn in the commercial real estate market and is facing a barrage of lawsuits as it attempts to reorganize certain properties under bankruptcy protection.

Broadbent’s financial hardships have become so severe that Huntington disclosed in the lawsuit that the company is attempting to sell its headquarters. An appraisals showed the value of the building declined from $12.6 million in January 2007 to $6.5 million in April 2011, according to the lawsuit.

It's not clear from the suit how much of the money Broadbent borrowed using the headquarters as collateral went toward the purchase and renovation of the building. Broadbent's original construction loan to renovate the property was for $11 million, the lenders said. The company took out a subsequent term loan related to the building, according to the lawsuit.

In March, “Broadbent informed HNB that, due to ‘economic changes,’ the property no longer was providing sufficient revenue to allow them to continue making monthly payments of both principal and interest on the project loan and the term loan, and Broadbent requested that lenders agree to modify the terms,” court documents said.

HNB said it declined to modify the terms of the loan after Broadbent failed to make principal payments due on March 10. The company instead paid only the monthly interest amount due on the loans, according to the complaint.

Exacerbating Broadbent’s financial challenges are four unrelated unpaid court judgments either PNC or Huntington have obtained against the company totaling $17.3 million. The judgments involved project loans the banks made to Broadbent for strip center developments.

George P. Broadbent, who is named in the latest suit brought by Huntington and PNC, co-founded the real estate company in 1972.

Earlier this month, IBJ reported that George Broadbent sold The Broadbent Co. to his wife, Mary Clare Broadbent, for $50,000 in March 2010 as the mounting lawsuits threatened his control of the company.