Despite losing two of its five biggest events—the NASCAR Nationwide and truck races—last month, Lucas Oil Raceway is in overdrive heading into 2012.

With the Nationwide race speeding to the Indianapolis Motor Speedway to be run the day before the Brickyard 400 and the NASCAR truck race evaporating from the market altogether, LOR officials said they’re already making plans to replace those events next summer and are confident the track will be profitable in 2012. 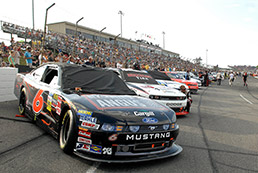 The NASCAR Nationwide race is one of the most popular events and the second-biggest moneymaker at Lucas Oil Raceway. (IBJ Photo/ Perry Reichanadter)

The racetrack will host 110 events this year, but losing the two NASCAR races is a big hit that must be compensated for, said Tim Frost, a Chicago-based motorsports business consultant. He estimated the loss of revenue from the two events at $3 million, with a profit margin of around 10 percent.

“Those were special events, and they had a captive audience on Brickyard weekend,” Frost said.

The potential revenue loss doesn’t end with the races themselves. California-based Lucas Oil, which this year began a three-year title sponsorship of the track, wants to renegotiate its deal, and it’s not clear what will happen with Kroger, which has been title sponsor of the Nationwide race all 30 years it has been at the track.

“It’s a big blow to us because we’re losing some of the best advertising with the loss of NASCAR,” said Lucas Oil founder and president Forrest Lucas. “We plan to renegotiate that deal because we lost a big part of the value.”

Despite rumors, there are no plans by the track’s owner, California-based NHRA, to sell the facility and no plans to redevelop the land.

“This track has been around for 50-plus years,” said Lucas Oil Raceway General Manager Wes Collier. “It’s not going anywhere anytime soon.”

“We certainly hope to be profitable,” he said. “But it’s a constant battle. We’re no different than any other entertainment venue.”

Stable ownership should help LOR deal with the changes and challenges ahead. NHRA has owned the facility since 1979. It probably carries little debt, Frost said. And with only 12 full-time employees and several hundred part-time seasonal workers, the operation’s overhead should be small enough to be manageable.

Upgrades to the track’s surfaces, grandstands, suites, the press box and administrative offices were spread out from 1998 to 2009, assuring costs remained manageable, Frost said, while keeping the track in good shape.

In addition to the 0.686-mile oval where the NASCAR races ran, the facility also has a 4,400-foot drag strip and 2.5-mile road course.

“That facility remains extremely attractive to all different kinds of races, from sprint cars and Silver Crowns to stock cars and sports cars,” said Mike Lewis, president of the track from 1995 to 1998 and now senior vice president of Don Schumacher Racing, a Brownsburg-based NHRA team. “It has the amenities of a big-time track with an intimate feel. It’s a very special place, and people in racing are very aware of it.”

Help in growing LOR is coming from the track’s neighbor to the west.

In October, the facility will be annexed into Brownsburg, which has promised to promote the track and its events, provide security and traffic assistance on race days, and improve access. That could include building a road that would give the complex direct access from Ronald Reagan Parkway.

The Brownsburg Town Council voted July 21 to annex 2,200 acres, including the 267-acre racing venue. Town officials said they’ll work collaboratively with the track to develop the land around it, possibly for racing ventures. Brownsburg is home to about two dozen NHRA drag-racing teams and a handful of other race teams.

“We think there’s a lot we can do with our chamber of commerce and the other race teams to work collaboratively with the track,” said Dale Cheatham, Brownsburg’s town manager.

LOR officials also are in discussions with NASCAR officials about getting another date on the stock-car circuit calendar. LOR has hosted a NASCAR race since 1982.

“NASCAR was hoping we could find a different date to work with,” Collier said. “We’re not sure if we will be on the schedule for 2012 or not.”

NASCAR this month announced that the Nationwide race in Nashville, Tenn., will not be held in 2012, and sources within NASCAR said there are discussions about moving that race to LOR. The Nashville race this year was held April 22.

IndyCar is another option

But Bernard said he hasn’t studied the idea much, and others think it might be a difficult proposition.

Given the popularity of IndyCar races on short ovals, such as Iowa, it seems like a good fit.

While the grandstands around LOR’s oval seat only 15,000 to 20,000 people, the IndyCar Series has gone into other small venues when series officials think they can attract a solid television audience for a race.

“I’ll say this,” Collier said. “If it’s something the IndyCar Series thought they could make happen, it’s definitely something we’d be willing to look at.” 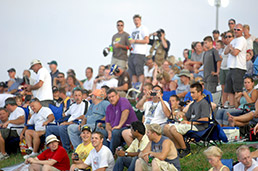 Since there are more IndyCar fans in central Indiana than anywhere else in the nation, “I definitely think it would be a popular event, and a very different kind of race than you’d see at the Indianapolis Motor Speedway,” he added.

But the faster speeds of IndyCar could make it difficult. Even the Lights cars, which are a bit slower than the top-tier IndyCar Series rides, might be tough.

“It has been looked at,” said Tony George Jr., who heads up the Indy Lights series, the top feeder circuit for the IndyCar Series.

He explained that the best racing line around LOR’s oval is along the outer wall, and passing on the low side for an IndyCar or Lights car would be difficult.

More about LOR’s future will be known in September or October, when most sanctioning bodies—including NASCAR and the IndyCar Series—release schedules.

Cracking those schedules in 2012 will be a challenge. LOR officials didn’t learn of NASCAR’s plans to pull its races from the venue until mid-July, which is well into sanctioning bodies’ planning process for the year ahead.•