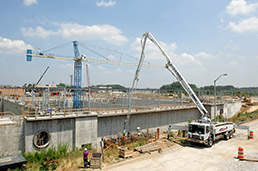 The city is building a secondary wastewater treatment facility at its Belmont Avenue plant. Sewage stored in the deep rock tunnel eventually will end up at this new facility. (IBJ Photo/ Perry Reichanadter)

A new state law that alters the public bidding process could add complication and possibly millions of dollars to a soon-to-be-bid segment of a massive Indianapolis sewer project.

The changes give companies based in the county soliciting bids—as well as those based in adjacent counties—an advantage in seeking contracts for public works projects and supplies.

That uproots the traditional practice of awarding contracts to bidders that offer the lowest price and meet bid specifications.

State lawmakers, who this spring tucked the so-called “buy local” provisions into a broader bill that lowered the state’s corporate income-tax rate, tout the changes as a way to stimulate local economies by giving firms located there more government business.

But groups that represent contractors and local governments say it will make the bidding process more cumbersome, create ambiguity about bidding procedures, and, in some cases, increase the cost of projects and supplies.

“Local governments may end up paying more for a product or a service than they would have if this law wouldn’t have been in place,” said David Bottorff, executive director of the Association of Indiana Counties.

The law’s impact soon could play out in Indianapolis as the city selects a firm to build its deep-rock-tunnel connector. The $250 million to $300 million project will add storage capacity for raw sewage, reducing instances where it overflows into rivers and streams. It’s part of a $3 billion fix to the city’s combined sewer system.

Bids for the deep-rock tunnel are due Aug. 11, and the city expects to choose a tunneling firm by mid-September.

The bid-selection process for the project will be more difficult if the city receives bids from firms that apply for the local preference.

Under the city’s conservative estimate, the price-preference language in the law has the potential to increase the cost of the tunnel project by as much as $3 million.

Some lawyers who have analyzed the law, though, say it could be millions more.

The city also has to establish how to apply myriad aspects of the law that at this point remain ambiguous, such as which firms qualify for the local distinction.

Under the new law, government agencies should consider a business local if the company has its corporate headquarters in the county, pays most of its payroll to residents there, or has a majority of its employees living in the county.

Local government units also can establish benchmarks for levels of capital investment or economic impact that would qualify companies as local, though Indianapolis has not done that.

To claim the preference, a business has to declare that it’s seeking the distinction in its bid and provide its location, payroll information and number of employees in the county offering the bid and in adjacent counties.

But there’s still a lack of clarity about exactly how a price advantage would play out for qualifying businesses.

The law gives those businesses an edge by requiring local governments to consider their bid a certain percentage lower than the actual bid, depending upon the cost of the project. So projects or purchases of less than $50,000 get a 5-percent advantage; those from $50,000 to $100,000 get a 3-percent break; and those of more than $100,000 get a 1-percent discount.

For example, for the deep-rock tunnel project, Indianapolis would consider a local company that sought the distinction and bid $300 million to have bid $297 million using the 1-percent preference.

Under the way Bottorff’s group and Indianapolis interpret the law, if that price preference were enough to make a local company the lowest qualified bidder, the city would award that company the project, even if it meant paying more because another non-local company’s actual bid was lower.

For example, if a non-local firm bid $297.1 million, the city would have to pick the local firm—based on the adjusted bid of $297 million—but still pay the actual bid of $300 million.

Some lawyers, however, say the legislation goes further than that.

Baker & Daniels attorney Scott Chinn contends the law says a firm with the local preference must get the nod over non-local bidders—even if its bid is substantially higher.

Chinn prepared an analysis of the law for the Indiana Construction Association, which distributed the information to its members. That analysis included a hypothetical example in which a local firm beat out three other bidders, even though its bid was 68-percent higher than the lowest bid.

But in the analysis, Chinn also maintained that he thinks government units maintain the ability to reject all bids, so they wouldn’t be locked into picking a firm whose bid was much higher than the amount budgeted for a project.

Still, if his interpretation holds, it would open up government units to incurring significantly higher project costs.

Sen. Jim Tomes, a Wadesville Republican who co-wrote the law, said that is not its intent. The idea, he said, is to tip the advantage in a local company’s favor if the prices are within a close range.

And while, in some cases, that could mean cities and counties spend more, the benefit to local economies will outweigh the difference, Tomes said.

“We’ve heard over the years about people buying American-made,” he said. “That’s sort of like this—it gives you the sense you’re helping somebody who is in your back yard.”

The law creates other concerns. It isn’t clear, for example, whether a joint venture among a non-local firm and a local firm would qualify for the preference, or whether a firm in a county adjacent to the one offering the bid but in a different state would qualify.

Also ambiguous is how counties and cities should proceed with projects receiving federal dollars that typically carry their own bidding guidelines. (While Indianapolis’ broader sewer overhaul receives federal dollars, the deep-rock tunnel component does not.)

Those who have studied the law say it will be left to locals to come up with their own interpretations and apply the law accordingly.

“It adds another level of complexity to something that’s already complex,” said Tom Bredeweg, field services manager for the Indiana Association of Cities and Towns.

It also creates confusion for contractors, who will be left to sort through a heap of different policies crafted by the various counties and municipalities.

“I think the entire preference concept is troublesome to the industry,” said Charlie Kahl, president of the Indiana Construction Association. “The integrity of the construction industry and the cornerstone of preserving that integrity is the competitive bid process. This buy-local provision deviates from that.”

Indianapolis released a document when the law went into effect July 1, outlining the information bidders must submit, how the preference would be calculated, and how joint ventures would be considered.

The deep-rock tunnel will be Indianapolis’ first sizable public works project bid under those guidelines.

Sarah Holsapple, a spokeswoman for the city’s Department of Public Works, said the city doesn’t expect to receive bids from many local firms because the type of work is highly specialized and only a handful of firms around the country are qualified to do it.

“There haven’t been a lot of local companies that seem like they may be front-runners,” Holsapple said, “but that could change.”

Meanwhile, groups that oppose the law are mulling their next moves. Bottorff said his group likely will push for lawmakers to repeal or modify the law in the upcoming session.

“If there’s a need to have a product or project delivered locally, officials can write that into the bid,” Bottorff said. “They could easily address that without a state law like this.”•