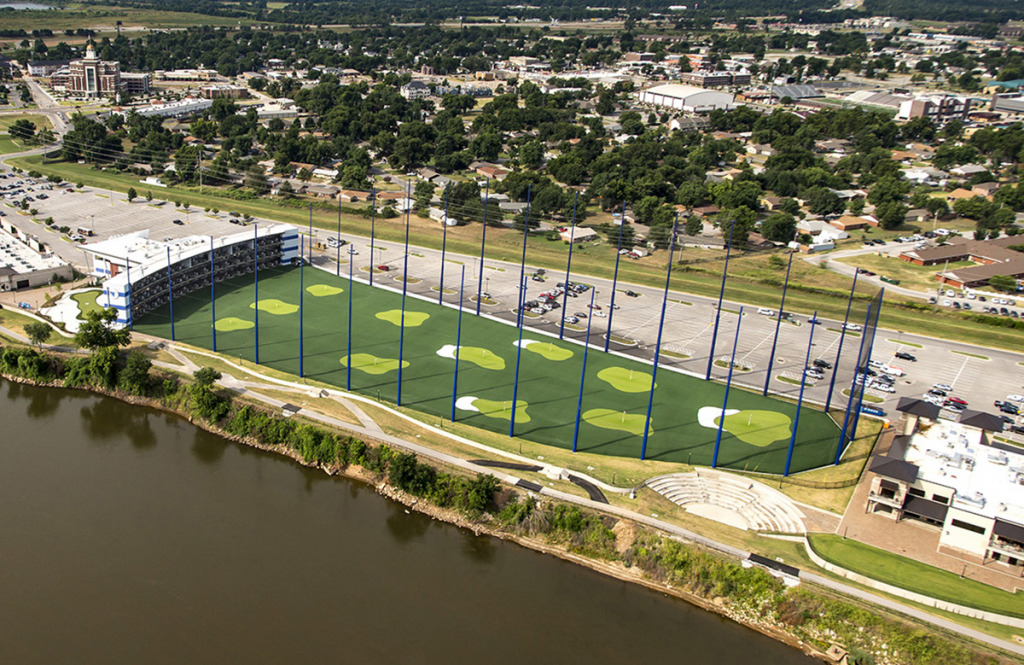 A local development partnership plans to develop a $28 million golf and entertainment venue along the White River near downtown Indianapolis.

The venue is expected to be a franchise of Flying Tee—a competitor of Topgolf, which opened a venue in Fishers in 2017.

MWA Masterbuilders LLC and Indy Golf Party LLC plan to start construction on the project in mid-2021 on land immediately west of the river, north of West Morris Street.

The $28 million project price includes land-acquisition costs, which the developer did not disclose. By comparison, Topgolf spent between $18 million to $25 million to develop its Fishers venue, but it did receive some infrastructure incentives from the city to lower its costs.

Steve Alexander, a partner in MWA, said the development team expects the economy and local tourism will recover from the coronavirus pandemic during the time the project is under construction.

“We’re going to see recovery in the economy and tourism … [despite] the temporary diversion that COVID has brought to the growth of downtown’s entertainment industry,” he said.

The venue is expected to have tee boxes on multiple stories, full-service dining, conference rooms, private event space and a pro shop. Specific designs for the project have not been finalized.

Players will be able to participate in a variety of golf games centered on accuracy and distance. Each tee box will come equipped with television screens to help players track their shots and game performances.

Flying Tee, headquartered in the Tulsa, Oklahoma, area, is one of several companies that hopes to compete with Topgolf, which has about 60 venues across the United States.

The company’s flagship location in Tulsa is a three-story, 60-bay venue allowing guests to play virtual versions of famous courses, play games, or practice their swing. That facility is now managed by GolfSuites.

It’s unknown how many locations Flying Tee has in the works around the United States.

The property slated for the Indianapolis development is along South White River Parkway West Drive, adjacent to the White River Trail and a wooded buffer along the river. Alexander declined to specify an exact address, as rezoning applications aren’t expected to be filed with the city until next week.

The site is south of Interstate 70 and is about one mile southwest of Lucas Oil Stadium. Alexander said the property is under contract, but is currently occupied by industrial users.

Alexander, who is also the designer on the project through MWA affiliate Prince Alexander Architects, said “people are going to be shocked” by how well the facility meshes with the waterfront of the White River.

“To to be able to bring something this big, and this dramatic and responsive to people’s desire to be outdoors is fantastic,” Alexander said. “But the other unique aspect is its proximity to the outdoors.”

Additional details about MWA Masterbuilders and Indy Golf Party could not be found, as the companies are not yet included in the state’s business database. Alexander said the partnership includes businesspeople from other downtown ventures, including the Tru by Hilton hotel now under construction, adding that ownership details will be made public in the coming weeks.

Construction on the golf facility is expected to be completed by mid-2022.

39 thoughts on “$28M golf facility in works for downtown Indianapolis”