Lynn Kimmel swore she would never go into the car business.

Growing up, she watched the long hours her mother, Freda Lockhart, worked in the 1960s as an accountant and later general manager for auto dealerships in three states. Kimmel chose to work in human resources and as a country club manager instead. 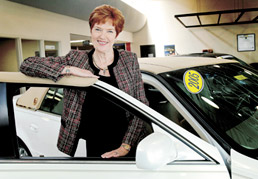 Then, in 1972, the owner of an Indianapolis Cadillac dealership where Lockhart had earlier worked died. The dealer’s widow asked Lockhart, who was living in Florida by this time, to move back and take over the dealership. Lockhart agreed, becoming Cadillac’s first female dealer. Three years later, Kimmel found herself drawn to the family business. A love affair began that is now going on nearly 40 years.

“I love the excitement” of being a new-car dealer, Kimmel said, in part because it is like running several kinds of businesses at once—sales, collision repair, parts, engine repair.

But 2009 and 2010 brought Kimmel a new level of excitement—or, more accurately, anxiety—no auto dealer would relish. Lockhart Automotive Group, which had grown through the 1990s from one dealership to six, had the rug yanked from underneath it. General Motors Corp. announced in the summer of 2009 that it would close its Saturn and Hummer divisions. Lockhart was central Indiana’s exclusive Saturn dealer, having jumped in on the ground floor of the grand Saturn experiment in 1988, opening one of the line’s first showrooms two years later. Kimmel led Lockhart’s Saturn operations.

“We did not even have product” in the dealership in the early days, Kimmel said. GM provided one car, as a demo. Customers had to order their own car, then wait months for it to arrive.

The no-haggle, set pricing structure and emphasis on building customer relationships made selling Saturns “a unique experience—one I would not give up for anything in the world,” Kimmel said.

So the news that GM was abandoning the line was “devastating,” and unexpected, even though she and her brother, Marc Lockhart, who co-own Lockhart Automotive, knew GM was in trouble. They expected the corporation to greatly cut back on its roughly 200 U.S. Saturn dealerships, but they didn’t expect the entire division to fold.

Lockhart had 273 employees at its height. It now has 123. Since GM spent a year shutting down the Saturn division, some of that reduction happened through attrition. But many workers had to be let go, Kimmel said, with those most loyal staying to the end.

Lockhart’s three Saturn dealerships—on the west side, in Fishers and in Greenwood—along with a Fishers Hummer dealership, were shuttered by late 2010. Revenue dropped from $177 million in 2008, to an estimated $91 million this year.

Lockhart has since converted its Saturn of Fishers store into a used-car outlet, called Lockhart Preferred Pre-Owned. Besides serving as president of Lockhart Automotive, Kimmel, 66, runs the used-car location. Marc Lockhart operates the company’s two Cadillac dealerships: its flagship on North Keystone Avenue at 56th Street and one in Greenwood. Both Kimmel and Lockhart have children in the family business. Kimmel’s daughter, Kristin Smith, is the company’s fixed operations manager.

IBJ.COM EXTRA
For a close look at the Lockhart legacy, click here.

Lockhart Automotive’s Keystone dealership is being moved north early next month, to the empty Hummer location, 1/4-mile south of Lockhart Preferred Pre-Owned on State Road 37. A second used-car operation is set to backfill the Keystone location.

Kimmel is heading up the reshuffling, as part of shepherding overall company strategy. Long-term vision and financial planning are her strengths, according to her brother. She knows how to lay out a game plan and “put everyone on the same page to get there,” Marc Lockhart said.

That skill set complements his natural sales instincts, to make the pair “a pretty good team,” he said.

“When we were younger, we had a rule that,” for any business disagreement, “we’d go in the office and shut the door and you’d have to convince me 80 percent. Once you had convinced me 80 percent, we’d open the door and I’d support [the idea] 100 percent.” That united front kept employees from playing divide-and-conquer between brother and sister. The two no longer need the rule, Lockhart said, because they’ve worked together so long, “it becomes more of an instinct.”

Their strong connection made it hard for Lockhart to watch his sister absorb the Saturn loss.

“It devastated us as a company, but her more,” he said. “It hurt her more; it made me mad.”

No dealer in the state was hit harder than Lockhart Automotive by GM’s decision, said Marty Murphy, executive vice president of the Automobile Dealers Association of Indiana. To be sure, 2009 and 2010 were ugly for the entire auto-franchise industry. Indiana lost 65 new-car dealers over those two years, a 13-percent drop, according to National Automobile Dealers Association data. But the Lockhart family business shrank from six stores to two in one fell swoop, through no fault of its own.

Kimmel “contained her composure through the whole thing,” Murphy said. “She was very, very together, handled it gracefully.” Kimmel has served on the ADAI board for five years, and has just begun a one-year term as president of the 500-store trade group.

Lockhart Automotive would not have survived the blow, Kimmel said, had her mother, who died in early 2010, not taught her and Marc to operate conservatively and be “cash-conscious.”

“I’m really glad my mother did not have to go through” the downsizing, she said.

And the company’s rebuilding is in full swing. Lockhart is focused on promoting Cadillac’s strongest line of new models in years. And Kimmel said she has “done a lot of transition work the last 18 months,” including making sure Lockhart’s multiple properties are put to good use.

“Dealership properties are not suitable for much else by their design,” Murphy said, so using the surplus space to expand into used-car sales makes sense. Picking up a different new-car brand isn’t an option, he said. The Indianapolis franchise market is saturated.

“We have accepted the reality that we’re not a six-franchise company” any longer, Kimmel said. “We’re still learning how to be used-car dealers.”

“What most people would consider a disadvantage, she would turn into an advantage,” and his sister absorbed that lesson well, he said.

Tom O’Brien Jr., whose 80-year-old family auto-dealer empire encompasses five locations, has known Kimmel more than 30 years, and also knew her mother. O’Brien’s father owned a Chrysler dealership just down Keystone from Lockhart’s Cadillac store. O’Brien said Kimmel learned from “a great teacher” how to be “both very gracious and one tough broad.”

In life, “there are the people who are willing to work and get things done and the other group is perfectly happy standing on the sidelines and letting other people worry about it,” O’Brien said. “Lynn has always been in that first group.”