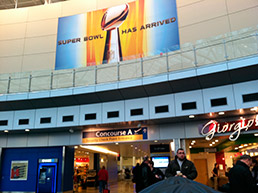 ESPN's Colin Cowherd raved about the airport on his morning radio show, calling it the best he's seen.

And Fox Sports contributor Peter Schrager noted on Twitter, "The way every NFL writer is gushing about Indianapolis you'd think they were giving out free massages at the airport."

Not quite, but close.

"The airport is visitors' first and last impression of this city, and it's having the impact we'd hope it would have," said Chris Gahl, spokesman for the Indianapolis Convention & Visitors Association. "Visitors are first impressed by the reduced taxi times from the runway to the terminal. Then they're telling us they are wowed by the convenient layout of the terminal, the architecture and the art exhibits."

Local restaurants at the airport including Harry & Izzy's and Shapiro's are making a particularly strong impression, he said.

And it's not just the $1 billion terminal that's scoring points.

The Airport Authority has brought on extra staff members and volunteers to welcome an estimated additional air-traffic load of 40,000 people, including those on 75 extra commercial flights and at least 60 charter flights. About 700 additional private planes are expected at local airports this week.

Airline staffers are making special welcome announcements upon landing in Indianapolis. Banners greet arriving passengers, with, "Welcome to Indianapolis" and "Super Bowl has arrived." Official Super Bowl beer sponsor Bud Light offers its own welcome on a massive banner hanging above the elevators to baggage claim.

"We wanted to really make the airport our welcome mat, and all the things happening out there really sets the tone for what's going on downtown," Gahl said.

The plaza between concourses is full of temporary kiosks and the massive Lids Locker Room store that's three times the size of the homegrown chain's traditional mall shops.

Another feather in the city's cap: The years-long reconstruction of the interstates 465 and 70 interchange is finally complete, giving visitors a smooth ride into downtown and an impressive view of a skyline bookended by JW Marriott and Lucas Oil Stadium.

Along the way, a billboard next to a giant checkered flag welcomes fans to the "Epicenter of Awesome".

"The visitor feedback has been tremendous so far," said John Dedman of the Super Bowl Host Committee. "People have given us a lot of overwhelmingly positive comments about the airport, city, hotels and other amenities."

But the busiest time for the airport won't arrive until after the clock runs out on Super Bowl XLVI late Sunday night. Passengers tend to trickle in upon arrival for the Super Bowl, but they leave all at once.

The Airport Authority is encouraging passengers to arrive three hours early and are opening counters at 3 a.m. the morning after the Super Bowl to accommodate early-departing crowds. The Transportation Security Administration is bringing in extra staff to open two extra screening lanes at each concourse.

And good news for fans of whichever team wins the big game: Licensed gear featuring the winning team will arrive in time for departing fans to spend a few final dollars in the Circle City.