The picturesque backdrop of Lucas Oil Stadium serves as an ideal Super Bowl setting for ESPN’s television and radio studio at Pan Am Plaza in downtown Indianapolis.

But the hundreds of spectators who have lined the paved courtyard this week to watch live broadcasts of the network’s “Mike and Mike In The Morning” radio show are oblivious to the amount of work it took to secure and prepare the location.

In hindsight, ESPN producers are pleased with their decision to drop stakes at the plaza, even if they initially preferred to be on the more visible Monument Circle.

It quickly became apparent, though, that logistics issues on the Circle would be too great to overcome, in terms of the street closings needed to accommodate the semitrailers of equipment.

An indoor site from which to broadcast the shows also topped the list of essentials, to safeguard against the cold and wet weather typical of Indianapolis winters. As luck would have it, that’s been a non-factor for ESPN’s secondary outdoor set kept plenty warm by three industrial-size heaters.

“We felt like this could be the epicenter of what’s going on here this week,” said Seth Markman, an ESPN senior coordinating producer, of the plaza. “We knew Indianapolis had the possibility of being really cold, but we’re really happy.” 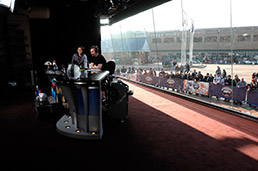 ESPN's Colin Cowherd gets ready to broadcast his show from the network's Pan Am Plaza studio. (IBJ Photo/Perry Reichanadter)

Two semitrailers were put together to serve as the studio. A large glass window that takes up most of the side of one of the trailers provides fans an opportunity to watch the shows. Cameras pointed at ESPN radio personalities and their guests also capture the stadium where Sunday’s Super Bowl will be played.

“It’s good for fan experience, and the view of the stadium behind us is something we’ve never had [in past Super Bowls],” Markman said.

Pan Am Plaza was closed for a couple of weeks in September after structural problems were found in the garage, but it reopened to pedestrian traffic in October after bracing was added. Special events are now being approved on a case-by-case basis until a complete restoration can be undertaken.

ESPN called in a large crane to lift the trailers onto the support beams. At the time the network secured the site months ago, it had no idea of the additional work that would be required to get the set ready, said Michael Feinberg, the network’s coordinating director.

“We would have loved Monument Circle,” he said. “But we’ve never had a background to a stadium [for a Super Bowl].”

The “Mike and Mike” show began broadcasting from 6 a.m. to 10 a.m. at the site on Monday and wrapped up on Friday. “The Herd With Colin Cowherd” radio show also is using the site.

ESPN officials visited the city several times and worked closely with the Super Bowl Host Committee to choose a site from roughly a dozen suggestions from the committee.

Network officials already are working with host committee members of New Orleans, the site of next year’s Super Bowl, to nail down a broadcast site in the Big Easy.

As for Indianapolis, the turnout for the “Mike and Mike” morning show in the five weekdays leading up to the Super Bowl has been “as good as we’ve ever had,” co-host Mike Greenberg said.

He’s working his 13th Super Bowl for ESPN and his 16th overall, and thinks Indianapolis has proven it’s worthy of another chance to host the event.

“It’s been a terrific site,” Greenberg said. “There’s always going to be something about a warm-weather city, but I don’t know why you wouldn’t consider it again.”