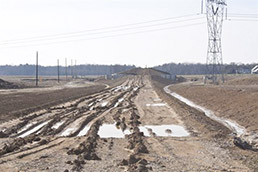 Contractors have cleared a path for I-69 in Daviess County. The state alleges inadequate erosion and sediment control in a section north of here. (Photo Courtesy INDOT)

The Indiana Department of Transportation and a contractor on the Interstate 69 project downstate have been cited for more than a dozen deficiencies in preventing erosion and the flow of sediment into streams.

An inspector for the Indiana Department of Environmental Management in December found workers for road contractor Fred Weber Inc. built a number of erosion control structures that weren’t constructed properly to filter discharge.

In other instances, sediment basins failed, allowing for “severe sediment discharge” into streams along the interstate corridor under construction east of Elnora and the White River, in Daviess County.

“Adequate storm water quality measures are not implemented throughout the project to effectively prevent sediment discharges from this project,” stated the inspection report.

“It is imperative that actions be implemented immediately to correct the deficiencies,” IDEM told Fred Weber Inc. and INDOT, which is responsible for overseeing contractors on the $3 billion, 142-mile new-terrain highway.

The report did not cite instances of damage to aquatic life nor were financial penalties assessed. Opponents of the project say it’s just another example of the environmental problems of the route being built to connect Evansville with Indianapolis.

The Hoosier Environmental Council, which in federal court is challenging the permit the Army Corps of Engineers issued INDOT to build the road, has long warned of potential damage to waterways, limestone formations and wildlife.

The group said sediment can kill invertebrates that live on stream bottoms that are food for fish. Effects can trickle down to other species such as frogs and snakes.

“It is significant. The best we can tell, it represents a pattern of problems surrounding the highway,” said Tim Maloney, policy director of HEC.

INDOT said the I-69 contract at issue is the first one it has awarded to Missouri-based Fred Weber.

“INDOT has been working with the company to help them become familiar with Indiana’s enforcement of erosion and sediment control regulations,” said Cher Elliott, a spokeswoman for INDOT.

She said the construction firm has ramped up its erosion- and sediment-control efforts and that INDOT has held numerous meetings with the contractor.

“Both the contractor and INDOT are responsible for addressing the situation,” said IDEM spokeswoman Amy Hartsock.

Hartsock said most of the concerns cited during the routine inspection have been addressed and that a follow-up inspection is planned.

Such environmental missteps provide ammunition to I-69 opponents, who’ve argued the state should pursue a less environmentally damaging route. They continue to promote the idea of improving U.S. 41 to interstate standards and improving the connecting I-70 rather than the new-terrain approach.

Citizens for Appropriate Rural Roads, or CARR, last fall posted a video showing deeply rutted land in Greene County, where contractors were building the interstate. Water appears to be bubbling up from sandy soil layers that were excavated.

The group claims excavation work punctured those soil layers and caused wells used by families in the area to dry up. It said the work also carried sediment into the White River.

HEC contends the erosion problems in part reflect the speed at which INDOT and its contractors are moving to build the road. Although I-69 has been paid for partly with proceeds from the leasing of the Indiana Toll Road, the northern phase of I-69 between Indianapolis and Bloomington is not funded.

INDOT said it has enjoyed favorable pricing for labor and material during the economic downturn and thus has tried to make good headway on the project.

Despite that progress, HEC and CARR are fighting in federal court to halt work on the new-terrain route.

In a suit pending in U.S. District Court in Indianapolis, the groups allege the U.S. Army Corps of Engineers violated the federal Clean Water Act in granting INDOT permits to construct the interstate. They cite a permit to dump about 644,800 cubic yards of earth into wetlands and streams in Daviess and Pike counties, including the Patoka River National Wildlife Refuge and Wildlife Management Area.

On Feb. 15, the court granted INDOT’s motion to intervene in the case. Court arguments are expected to begin this spring.

“Were the court to issue an adverse decision reversing the Corps’ granting of permits to construct [the section], INDOT may be forced to stop construction activities and file a new permit application,” the agency said.

“This could subject INDOT to increased costs for the project as well as contractual penalties for the resulting delay in completing the construction contracts that were issued long before this lawsuit was filed.”

More recently, HEC and CARR asked the court for a summary judgment on its behalf. They’re expected to argue the case next month.

It seems unlikely that the project will be scuttled, with already hundreds of millions of dollars spent on sections between Interstate 64, north of Evansville, north to Crane.

The groups nevertheless contend that, not only should the new-terrain route be canceled, but INDOT should turn to a less environmentally harmful alternative dismissed by the agency years ago: the U.S. 41/I-70 route.

Maloney noted that INDOT is in the midst of building a bypass around Terre Haute that will allow motorists to avoid a bottleneck caused by traffic lights on U.S. 41. The stretch of road being bypassed accounts for the biggest delays in traveling between Indianapolis and Evansville.

“If I-69 stalls out at Crane, and the bypass gets completed [at Terre Haute], people are going to start seeing the U.S. 41/I-70 route in a different light,” Maloney said.

State officials said the new-terrain route under construction presents the greatest time and fuel savings—by some measures a 20-minute improvement over the rejected U.S. 41/I-70 alternative.

The groups opposing the new-terrain route say it presents the most harm to waterways, woods, farmland and limestone-area features such as caves and sinkholes.

The route has yet to proceed as far north as the limestone region around Bloomington.•