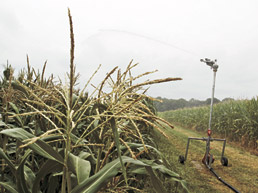 Dry cornfields, like this one being irrigated last summer near West Lafayette, brought a smaller crop that caused prices to spike. (AP Photo)

Farmers don’t like to think of themselves as wealthy, but the past year’s grain prices make it difficult to deny.

The average price Indiana farmers received for a bushel of corn reached a high last August of $7.18, nearly twice as much as the prior year. That kind of windfall tends to benefit farm-equipment sales, but it could also lead to more charitable giving.

At least, that’s what Indiana community foundations are hoping. In a bid to capitalize on the recent runup, along with the longer-term rise in crop prices, they’re encouraging farmers to give grain instead of cash.

Farmers don’t pay self-employment or federal and state income tax on gifts of grain, and the bushels included in the gift still count toward a deduction for production costs. The tax savings, depending on income-tax bracket, range from 29.3 percent to 54.3 percent.

“They’ll be able to give a larger amount, or get additional tax benefits,” said Mark Robbins, vice president at the $40 million Legacy Fund, the Hamilton County affiliate of the Central Indiana Community Foundation. “So many of them are unaware of this benefit.”

Despite its sprawling suburbs, Hamilton County is still home to families who farm thousands of acres, Robbins noted. But Legacy Fund has its work cut out in reaching them.

Robbins made his first inroads last fall through Craig Wallace, owner of Wallace Grain, a grain elevator and feed store in Sheridan.

The Wallace family had established a fund at Legacy several years ago in memory of Craig’s parents, Phil and Marianna, to benefit hospice care. Wallace and his brother, who also farm about 500 acres, decided to contribute to the fund last year in grain, which was valued at about $2,000.

Ownership of the grain was transferred to Legacy Fund, which then executed the sale.

Wallace later helped line up grain gifts from Al Lyon and his mother. The Lyons, who farm about 1,800 acres, put their gifts into a family memorial fund that provides scholarships for Sheridan High School graduates. That fund also was established several years ago at Legacy.

Lyon wants to see the fund grow large enough to provide the scholarships from investment income. Giving part of his harvest might help him reach that goal faster.

Soybean prices reached $13.70 per bushel last May. The 100 bushels of soybeans that Lyon gave to the Lyon Cannon Memorial Fund were worth about $1,200. That was “without a doubt” more than he’d expected to give, Lyon said.

The Internal Revenue Service has permitted farmers to give commodities for many years, but the Legacy Fund and other community foundations in Indiana didn’t promote it, Robbins said.

Foundation executives see the gifts of corn and soybeans as a point of entry—farmers who give grain this year might give chunks of their entire estate in the future.

Tom Zoss, CEO of the Community Foundation of Morgan County, will be talking up grain gifts during a farmers’ breakfast the foundation sponsors each year at the Morgan County Fair.

“If they have a tractor big enough to climb up into, whether they admit it to themselves or not, they’re millionaires,” Zoss said.

The Morgan County foundation, which has assets of $6.5 million, manages many funds that are too small to be self-supporting, but Zoss hopes that with additional contributions, they’ll grow into endowed funds.

The minimum for a stand-alone fund at Legacy Fund is $25,000 but farmers can also give to one of 200 existing funds, Robbins said.

Last summer’s price spikes aren’t likely to be repeated, but with the ethanol industry adding to demand for corn, and China demanding soybeans, agriculture economists expect prices to remain at high levels.

Purdue economists are predicting corn prices around $5.50 per bushel, if the crop is as large as expected this year.

That’s still relatively high. The typical price for corn in the mid-1990s was around $2 per bushel.•