Home » Effort to save Rivoli Theatre faces another delay

The owner of the Rivoli Theatre is in a legal dispute with the previous owner that could prevent the old movie house from being saved before structural problems render it unsalvageable.

The Rivoli, 3155 E. 10th St., has the potential to be a catalyst for further redevelopment of the East 10th Street corridor, the stretch adopted by organizers of Super Bowl XLVI, if the not-for-profit that owns it can win complete control of the 1927 structure and stabilize it.

The owner, the Rivoli Center for the Performing Arts Inc., is locked in a dispute with Charles R. Chulchian, who gifted it to the not-for-profit in 2007. Chulchian retained an interest in the building at the time of the transfer, a detail that has complicated efforts to salvage the Rivoli. 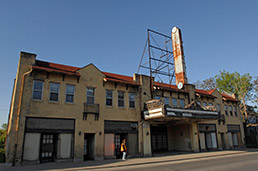 Mark Dollase, chairman of Rivoli Center for the Performing Arts Inc., is concerned the roof of the building will collapse before his group can raise money to save it. (IBJ Photo/Perry Reichanadter)

Mark Dollase, chairman of Rivoli Center, said his group has been working to win complete control of the building and appeared to be close to achieving that goal. But Chulchian recently hired new legal counsel and notified Dollase’s group April 9 that he was renewing his effort to retain a stake in the building.

Chulchian bought the Rivoli in 1976 and formerly lived in an apartment on the building’s second floor. Attempts to locate him to comment on his continuing interest in the theater were unsuccessful.

Dollase doesn’t know how much time it will take to resolve the latest legal twist, but he’s concerned that the roof of the building will collapse before his group can raise the money to save it.

Dollase said it would cost about $300,000 to put a new roof on the theater, a step that would buy the building more time. He said there are funders waiting in the wings to help save the building, but they are reluctant to invest before the legal issues are resolved.

A mild winter and early spring have helped slow deterioration of the theater, which was well constructed to begin with, Dollase said. “We’re fortunate that the Rivoli was overbuilt.”

The Rivoli anchors one of three redevelopment nodes that have been a priority for the East 10th Street Civic Association, a group working to encourage the corridor’s revival.

Tammi Hughes, executive director of the civic association, said her group’s dream is to see the Rivoli restored so that it can house performance space, studio space, practice rooms and other arts opportunities that neighborhood residents can take advantage of. Street-level space could house retail tenants.

The other two nodes are at 10th and Jefferson Avenue and 10th and Rural Street. Community advocates have spent years planning for a revival of the 10th Street corridor, an effort that was adopted by the National Football League and the Indianapolis Super Bowl Host Committee. That high-profile support has leveraged millions of dollars for housing and retail redevelopments in the area.