Home » Charter schools in pipeline to be heavy on technology

Blended learning is about to shake up public schools in Indianapolis.

Three organizations have been approved to open 19 charter schools here that combine online technology and face-to-face instruction. The strategy allows schools to save money by employing fewer teachers, yet also can produce impressive student results.

And because lower-cost blended schools need no ongoing philanthropic support, they can be replicated rapidly—about three times more quickly than charter schools in Indianapolis have been so far.

“We’re finally seeing the long-awaited arrival of technology that actually transforms instruction,” said David Dresslar, a former public school superintendent who is now director of the Center of Excellence in Leadership of Learning at the University of Indianapolis.

If the blended schools in Indianapolis, which hope to enroll nearly 11,000 students, are as successful as blended schools in Arizona and California have been, Dresslar added, that will force traditional public schools here to adopt the concept, too.

Blended learning, also called hybrid learning, sends students to a computer lab to learn basic skills in math and literature—such as multiplication tables or parts of speech. Teachers then can focus on higher-level concepts such as story problems or composition writing during face-to-face instruction.

The software programs used in blended learning send streams of data to teachers, who can see what concepts students are grasping and what they are struggling to learn. The result, blended-learning proponents say, is that teachers are able to customize instruction—even though the ratio of students to teachers is higher in blended schools.

“It does provide a wonderful customized education for kids,” said Rick Ogston, head of Arizona-based Carpe Diem Schools, which switched to a blended model nearly a decade ago. At Carpe Diem’s high school last year, 87 percent of students passed the state math test and 93 percent passed the state reading test.

In August, Carpe Diem will open its first of six schools in Indianapolis. Each Carpe Diem school aims to eventually enroll 273 students in grades six through 12. And each school will have only four certified teachers, with other non-teachers to oversee students during their computer lab periods.

The other two organizations green-lighted to bring blended learning to Indianapolis are Boston-based Phalen Leadership Academies and California-based Rocketship Education.

Phalen wants to open six schools in Indianapolis, enrolling a total of 5,400 students. The newly formed group is led by Earl Phalen, founder of the Summer Advantage program, which already operates in 15 school districts in Indiana.

Its charter schools will be a year-round version of the five-week Summer Advantage programs, which have shown an average academic gain among students of two months, compared with a typical summer learning loss of three months.

In addition to the six schools in Indianapolis, Phalen also plans to start five other schools around Indiana by 2024.

“Our schools are built so that they are sustainable on state dollars,” said Phalen, whose budgets assume $8,000 in expenditures per student. Most charter schools previously have been making their budgets by “running a chicken dinner every year. It’s just not sustainable and it’s just not scalable.”

Charter schools in Indiana receive about $7,000 per student in state support, although funding can be higher for low-income and special-needs students.

Rocketship wants to open eight schools in Indianapolis, eventually enrolling a total of 4,000 students. But since the not-for-profit group is also expanding right now in Milwaukee and likely other cities, too, its first school won’t open here until 2015.

Founded in San Jose, Calif., in 2007, Rocketship’s schools serve a challenging population with about 90 percent of students classified as economically disadvantaged. Even so, last year at least 83 percent of its students passed the English portion of the California state assessment test and no fewer than 90 percent passed the math portion.

Rocketship CEO John Danner compared blended learning to hospitals, where doctors are rare but there are lots of nurses and other technicians to help patients.

Rocketship’s schools each have 500 students and only 16 teachers—about five fewer than most traditional public schools—because its students spend two hours each day in a computer lab, where they are overseen by non-teaching staff.

“Wow, that’s an awful lot of time to be at a computer, especially for the younger kids,” said Teresa Meredith, a Shelbyville kindergarten teacher who is also vice president of the Indiana State Teachers Association. She added, “That’s a tremendous amount of time expecting the technology to set the foundation.”

Meredith sees some potential for blended learning, but also wonders how much it is different from her own school, which has students on computers about 45 minutes a day, but always under the supervision of a certified teacher.

“I’m not real sold that it is that different yet, other than to save money,” she said.

Danner acknowledged that the computer software available for teaching basic math skills is not as effective as classroom teachers. And there really aren’t many great programs yet for reading, he said.

But Rocketship supplements the computer programs with as-needed tutoring in the computer lab, and its teachers do spend some class time on basic skills instruction.

“The thing that’s nice about blended learning is that you’re not making any all-in bets on technology,” Danner said. If a computer program has a weakness, he said, Rocketship’s teachers can compensate. 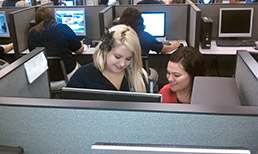 Rachel Harcrow, a teacher at Carpe Diem Collegiate High School, helps student Crystal Villareal in the computer lab. Carpe Diem wants to open six “blended” schools in the city in which students spend roughly 40 percent of their time on computers and the rest in classrooms. (IBJ photo/ Perry Reichanadter)

By using fewer teachers, Rocketship saves $1,000 per student in its 500-student schools. The savings are similar at the handful of blended schools across the country, according to an analysis by the education consulting practice at Boston-based Parthenon Group.

Schools nationally spend an average of $10,000 per student, according to data from the U.S. Census Bureau. But blended schools spend about $8,900, according to the Parthenon Group’s analysis, published in the book “Education Reform for the Digital Era.”

Carpe Diem, which uses even fewer teachers than most blended schools, spends just $6,300 per student, including debt service, Ogston said, and it could get by spending only $5,600.

Rocketship spends its savings on teacher salaries, which are about 20 percent higher than the average in San Jose public schools, and on training new leaders for all the schools it plans to launch.

“Economically, you can take a portion of what you’re saving and invest it in growth,” Danner said.

The potential for growth, combined with the impressive early results by Rocketship and Carpe Diem, led the Seattle-based Gates Foundation to give $500,000 last year to the Indianapolis-based Cities for Education Entrepreneurship Trust to study blended learning.

CEE-Trust, which is an offshoot of local education reform group The Mind Trust, is a consortium of cities swapping best practices on education reform. And these days, said Director Ethan Gray, blended learning is a hot topic in every city.

“Our expectation is that there is going to be an explosion in the [charter school] world over the next couple of years as charter management organizations implement some of the models that have been tried so far,” Gray said.

To date, no charter school organization has ever achieved such explosive growth. The San Francisco-based KIPP Foundation has 109 schools nationally—including one in Indianapolis—but it has taken more than 15 years to build that network.

And even KIPP is now trying out blended learning at a school in Los Angeles and soon another one in Chicago.

And not until the Indiana Charter School Board formed last year was it even possible for a school to apply for approval of multiple schools all at one time. Operated by the Indiana Department of Education, the board can authorize charter schools statewide.

The ramp-up in charter school approvals is not without controversy. Eugene White, superintendent of Indianapolis Public Schools, has said that if 20 new charter schools open in the city over the next five years, as planned by The Mind Trust and Indianapolis Mayor Greg Ballard, it could “destroy” IPS.

Even Phalen said that if all 19 of the blended-learning schools approved are launched in Indianapolis—as opposed to elsewhere in the area—it will create problems recruiting students.

Claire Fiddian-Green, director of the Indiana Charter School Board, said if charter school operators do not produce the results they promise and cannot show student demand for their schools, not all the proposed schools will open.

But if results are good and demand is high, she is prepared to recommend approval for several iterations of Rocketship, Carpe Diem, Phalen and other kinds of charter schools.

“When charter schools first started, they were really just one-offs, and it really has evolved a lot in the last five years,” Fiddian-Green said. “If schools have a demonstrated model and systems to support replication, then we’d like to support them.”•