The developer of a $15 million parking garage and retail project in Broad Ripple has overhauled its plans to comply with flood-plain rules and expects to start construction later this month.

Locally based Keystone Group suffered a setback in May when a zoning board denied its request to build the mixed-use, city-supported project a few feet below the recommended flood plain.

Keystone officials had said complying with the flood-plain rules would make the project too expensive to build. But Keystone on June 5 filed updated plans with the city’s Department of Code Enforcement, adding a flood wall and other flood-control features designed to bring the project into compliance.

The changes—including a precast concrete ring incorporated into the base of the proposed structure and entry doors outfitted with removable steel flood-control panels—likely will add $200,000 to the cost of the project, Keystone CEO Ersal Ozdemir said in an interview.

He said the changes require only administrative approvals and not a variance. Windows for the retail and restaurant portion of the project would sit atop 2 feet to 3 feet of exposed flood wall (depending on topography), rather than stretching to the sidewalk as originally proposed.

The walls just outside the retail tenants’ glass doors would include openings for the steel flood panels, intended to prevent floating debris in a flood from breaking the glass. The plan also calls for removable flood gates outside each entrance to the parking garage, even though the code allows such garages to be built in flood plains.

The three-story project at the southwest corner of College Avenue and Westfield Boulevard still will contain about 350 parking spaces and 25,000 square feet of retail space.

“It’s the same elevation,” Ozdemir said. “Nothing really changes except we’re putting this wall around the building that will protect us from a flood.”

A spokeswoman for the Department of Code Enforcement declined to provide a copy of the filings before IBJ’s deadline because the department has not yet processed the application for building permits.

Flood-proofing is one way to meet the requirements of the city’s ordinance at a lower cost than raising a building’s elevation, said Eric Gleissner, an engineer and principal in locally based Civil Site Group who has worked on several projects in the area.

It still isn’t cheap, Gleissner said, and the wall could harm the desirability of the retail space depending on how high it rises above the sidewalk. The Indianapolis Flood Control Ordinance requires the first floor of new development to rise at least 2 feet above the base flood elevation.

Gleissner said Indianapolis GIS data shows the site sits 3 feet below the area’s base flood elevation, meaning a flood wall would need to rise 5 feet above the sidewalks, leaving very little window space for retail or restaurant use.

But Ozdemir said the site’s elevation varies and most of the site is only 1 foot below the base flood elevation, hence the plans for a 3-foot flood wall, which would have a minimal impact on the proposed retail space. 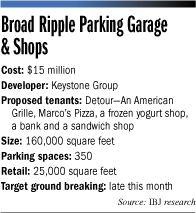 Other tenants planned for the space include Marco’s Pizza, a sandwich shop, a frozen yogurt shop, a bank with a drive-through accessible via College Avenue and a small Indianapolis Metropolitan Police Department substation (rent free for 10 years) at the project’s western edge along Westfield Boulevard.

The city has agreed to contribute $6.35 million from parking meter revenue toward the project, which will be owned by Keystone and its partners in the deal. Keystone will collect 100 percent of revenue from parking fees and tenant rents.

City officials say the investment is justified since the project will help alleviate a worsening parking problem in Broad Ripple driven by a glut of visitors to the district’s restaurants and bars who park in adjacent neighborhoods.

Many of the garage spaces will be used by visitors to Keystone’s new first-floor tenants: The retail and restaurant space alone would require access to at least 100 parking spaces to comply with the city’s commercial zoning ordinance, which in most cases requires one parking space per 250 square feet of development.

Many of the restaurants and bars in Broad Ripple don’t include any dedicated parking, let alone the numbers required under code.

“I don’t know of anyone in Broad Ripple that has 100 spaces,” said Kintner, who lives in Broad Ripple. “The idea is to get people to park there instead of out in the neighborhoods.”

Keystone will charge market rates for parking spaces in the structure, though the city retains the rights to “buy down” the rates if it sees them as too expensive, according to a project agreement.

The agreement also allows a “reasonable” number of reserved parking spaces for the commercial users, including for Marco’s delivery drivers, though it does not specify how many.

Kintner said the project’s viability was never in doubt, despite the zoning board loss in May. Keystone had argued a levee system along White River would provide enough protection from floods, but remonstrators feared a variance could lead to higher rates for federal flood insurance for the entire area.

The city has released half of the $6.35 million taxpayers are pouring into the project; Keystone used the funds to buy the triangle-shaped property. The other half is in escrow and will be released “upon submission of invoices” as construction proceeds, Kintner said.

The agreement calls for an allocation of 80 percent of project expenses to the parking garage, which the city is supporting, and 20 percent to Keystone’s commercial space. Parking is primarily on the second and third floors, while retail will take most of the first floor.•