Broad Ripple resident John Sutton has been more than a Yats customer. 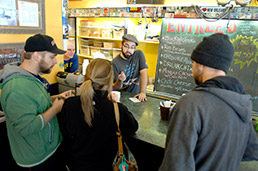 When Yats founders Joe and Regina Vuskovich decided earlier this year to grow their restaurant through franchising, Sutton jumped at the opportunity.

The husband-wife duo who started Yats plans to have 10 franchised locations open in the first year and within three years have restaurants across the Midwest. The plan is to expand from central Indiana outward, Regina Vuskovich said.

Sutton thinks the same qualities that have caused Yats to succeed here will make it a hit elsewhere.

“I love everything about Yats, and I have since the first day I stepped inside,” said Sutton, who lives a few blocks from the original Yats at 54th Street and College Avenue. “The food is great and it’s inexpensive. But it’s more than that. I love the atmosphere. It’s a real part of the community.”

One of the big reasons Sutton bought a Yats franchise was the Vuskoviches’ commitment to support franchisees.

“From talking to them, you can tell, they’re not just selling you a franchise,” Sutton said. “Their No. 1 priority is to make sure their franchisees are successful.”

There’s good reason for the Vuskoviches to ensure that Sutton and other early franchisees succeed.

“They have to make their first franchisees profitable. That will be key to their selling process and expansion,” said W. Todd Roberson, a senior finance lecturer at IU’s Kelley School of Business at Indianapolis. “If they don’t focus on the first franchisees, they’ll be seen as a take-the-franchise-fee-and-run operation.”

Sutton, and his sister, 33-year-old Brittany Franken, plan to open a Yats in a former 1,600-square-foot Quizno’s sandwich shop at 5650 W. 86th St. near Park 100 in mid-January. The opening—which will coincide with the opening of the sixth corporate-owned Yats at 10th Street and Indiana Avenue—is part of an aggressive plan to grow the operation nationwide.

Yats currently has two restaurants in Indianapolis and one each in Fishers, Carmel and Greenwood.

The second franchised location, to be owned by Yats employee Charlie Kays, will open in Columbus in February, and several other franchises are “in the pipeline,” said Regina Vuskovich.

Part of the appeal for Sutton was the relatively low investment. The initial franchise fee is $25,000.

There are additional expenses beyond the fee, such as the cost of leasing real estate, building out the space, signage and training, that should bring first-year expenses for a Yats franchisee to somewhere between $78,500 and $151,500, according to the Vuskoviches. 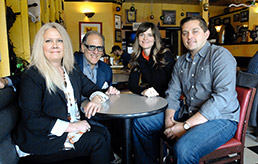 Left to right, Yats founders and owners Regina and Joe Vuskovich have selected siblings Brittany Franken and John Sutton to run the first Yats franchisee-owned location. It will be on the city’s northwest side. (IBJ Photo/Perry Reichanadter)

That’s less than half of what a typical fast-food or pizzeria franchise costs to open. It will cost about a tenth of a McDonald’s franchise.

Once the chain expands nationwide, Regina Vuskovich said, the company will make “a lot more” on franchise royalties than they will from their corporate-owned Yats restaurants.

The Vuskoviches declined to say what kind of return their franchisees can expect or how profitable the corporate-owned stores are.

“All the Yatses are profitable and doing very well,” Regina Vuskovich said.

Not that there weren’t some failures along the way.

Yats restaurants in Brownsburg and West Lafayette failed due to bad locations. Another one, in Bloomington, failed because the Vuskoviches didn’t connect with the permanent residents there and found that creating loyal customers out of the revolving student population was difficult.

Steve Delaney, a principal and restaurant expert at the locally based Sitehawk Retail Real Estate brokerage, thinks Yats’ growth plan “has great potential,” but added that there are challenges.

“This is a crowded marketplace, and there are other restaurants—like Gumbo A Go-Go out of Louisville—in the category,” Delaney said. “But Yats’ product is superior. I think a market like Indianapolis could support 10 to 15 [Yats] restaurants.”

One of the biggest appeals to a Yats franchise, Delaney said, is its low overhead, the small space needed, and “the overall simplicity of the operation.”

“You don’t need any hoods, grills or fryers,” said Regina Vuskovich, who handles most of Yats’ business operations. “You can drop the heart of the [Yats] kitchen just about anywhere.”

“They have to find the right franchisees, the right locations with a high-density daytime population, and assure the food is consistent across stores,” he said. “The quality of the food is clearly the most important issue.”

Managing the franchising operation is another concern, IU’s Roberson said.

“Some mom-and-pops think they can manage their own restaurants and handle the franchising operation,” he said. “But you need a dedicated staff to oversee franchising and give your franchisees their best chance at success.” 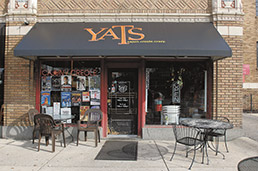 The owners of Yats say one of their restaurants only needs 1,000 to 1,600 square feet to operate. No hoods, fryers or grills are necessary.(IBJ photo/Perry Reichanadter)

“We realized Bill and Allan can reach and touch people that we just couldn’t,” Regina Vuskovich said.

CZ Growth Strategies will help with the overall plan, including vetting franchisee candidates and marketing.

The next challenge was making sure the franchisees could replicate Joe Vuskovich’s recipes.

“You just can’t find another Joe,” said Regina Vuskovich. “What he does is an art. Wherever people step into a Yats, they have to know it’s Joe’s food.”

Zukerman and Church connected the Vuskoviches with Louisville-based Custom Food Solutions to mass-produce its food and distribute it to franchisees—nationwide if necessary.

“We had another company that wanted to franchise our restaurants, but they couldn’t [mass] duplicate Joe’s recipes,” Regina Vuskovich said. “That was a deal breaker for us.”

Joe insists on using certain types of corn, peppers and spices in his recipes and won’t use modified food starches. He made numerous trips this year to Custom Food Solutions to work with them to perfect the mass production of his custom recipes.

Joe Vuskovich, a native of New Orleans and the son of a fisherman and oyster grower, has been perfecting his recipes for more than three decades.

Instead of formal culinary training, “I learned everything at my mother’s apron,” he said.

When Joe was 19, he and his brother started a four-table oyster bar in New Orleans. Visko’s eventually grew into a 700-seat restaurant and in the early 1980s was profiled in the New York Times and honored as one of American Express’ top 100 accounts nationally.

“I had old recipes that belonged to my mother and family, plus great employees, old-time Cajun cooks, and people who cared about food and knew what they were doing,” Joe Vuskovich said.

Then the economy tanked in the mid 1980s and the place went under.

Joe sought a new start, and migrated to Lexington, Ky., where he opened Jozo’s, one of the area’s first Cajun eateries. There he met Regina, a waitress at a local hot spot, the Atomic Café. She shared his love of cooking, and on a trip to Chicago to scout for a location for a food distribution business they intended to launch, they happened along the vacant storefront at 54th and College.

Joe thought to himself, “This place should be serving my food.” He contacted the building’s owner and in late 2001, opened the first Yats there. The second Yats, on Massachusetts Avenue, opened a year later.

For instance, the corporate-owned Yatses don’t have liquor licenses, but franchisees will be allowed to sell beer and wine to help increase the bottom line.

Since they’ve found a company to replicate the food, finding experienced restaurateurs and chefs to operate the franchises isn’t the top priority. Instead, the Vuskoviches—with the help of CZ Growth Strategies—is searching for people with the business acumen and financial wherewithal needed and the desire to work at the store themselves.

Sutton and his sister have little restaurant experience, but they both have “an entrepreneurial spirit,” Sutton said. Sutton started in the commercial construction business before opening his own parking business, Newpoint Parking. His sister runs her own photography business.

“We want them to remember everything that made them love Yats when they were customers,” Joe Vuskovich said. “And deliver that now that they’re on the other side of the counter.”•