Jim Carpenter has built a national business on birdseed.

He’s founder and CEO of the Carmel-based Wild Birds Unlimited retail chain, which caters to a seemingly tiny niche—supplying premium food, feeders and other equipment to hardcore backyard birdwatchers. Yet it’s enough to support 295 stores in the United States and Canada, with perhaps 15 more coming next year. 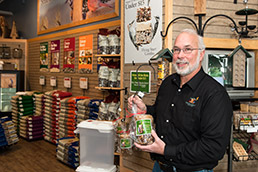 Jim Carpenter began just over a year ago to remake his stores, including the flagship on East 86th Street. (IBJ photo/Eric Learned)

Carpenter, 60, owns just one store himself—the chain’s flagship operation at River’s Edge shopping center on 86th Street. At 4,800 square feet, it far exceeds the footprint of 1,400 to 1,600 square feet for typical franchised locations. The left side of the space is occupied by a fanciful “nature walk” that includes a stone path, gurgling water feature, fake trees, piped-in bird calls and a stone bench.

“This is my little Zen bench where I sit and enjoy the birds,” Carpenter said.

Not that he sits around much. Usually, he’s at the company’s 40-person corporate office, which lately has been a particularly busy place. The chain recently unveiled a new marketing program encompassing everything from revamped store design to new staff training to a rebalancing of the product line. The idea was to place less emphasis on gift items and more on the store’s core product—birdseed.

“Bird food is what brings people in,” Carpenter said. “The better the choices, the presentation, the knowledge and the experience of the staff, the more bird food we’re going to sell and the more fun customers have feeding the birds.”

The rebranding effort began in November 2012 and was rolled out at the company’s annual franchisee gathering in June. To no surprise, the unveiling included a tour of Carpenter’s store, which has been done up in the new scheme. The most obvious departures from the old Wild Birds design are new floors; new signage; an airier floor plan; and a new, curved checkout counter.

What’s less obvious are the changes in emphasis. Fewer (but more essential) products, greater focus on customer service, and a rationalized product-presentation formula.

“The goal was not just to rebrand the pretty part—the colors and the floor and all that,” Carpenter said. “We need to make things simpler, more standardized, easier to learn, and easier to train.”

Learning from the best

To get ideas, Carpenter and his team studied a handful of franchisees whose sales far outstripped Wild Birds’ other units. They realized the outliers goosed cash flow by emphasizing bird food, feeders and other items of interest to hardcore, repeat customers. The company adopted that strategy across the board, not just weeding out non-core items, but also simplifying feed offerings. Which turned out to be easier on everyone.

The customer could walk into one of our stores and be overwhelmed by choices,” Carpenter said. “So instead of offering, say, 10 ways to feed suet, we might offer four options that will still cover everything. Having too many selections just made the conversation too long.”

About half of the chain’s stores already have adopted various aspects of the new campaign, which can cost from $10,000 to $30,000 to execute, depending on how many of the recommended physical changes are made (new flooring being the most expensive). Store owners get a lot of leeway as to what they include, because of the regional nature of the business. For instance, an in-store sign featuring a blue jay might work fine in Indianapolis, but not so well in places outside the birds’ habitat.

Christina Taylor, owner of Wild Birds’ Austin, Texas, store, is a big fan of the new plan, but she’s implemented it piecemeal, starting with a fresh paint job and new signage. She purchased her 13-year-old store last year, and her cash flow won’t permit anything more aggressive.

“Pulling down the walls was not an option,” Taylor said. “It’s my first year, and I’m still feeling things out.”

She’s thinking about opening a second location; if she does, she’ll implement the entire rebranding campaign. Taylor’s totally on board with the “It’s the birdseed, stupid” philosophy, because that single product line generates about 70 percent of her revenue.

The new format reduces a typical store’s stock of “gifty” items by one-third and displays core items in a more synergistic way. For instance, in the old days feeders were confined to one area, food to another. Now, feeds and feeders for, say, woodpeckers, are side by side.

Carpenter said the company is also emphasizing training, so staffers can offer better advice to veteran and budding birders. In the same vein, he’s casting the stores as birding command centers, complete with televisions hooked to live feeds of bird nests and feeding stations around the country, and an area where customers can post photos of birds they’ve attracted to their home setups.

“One reason that we have given our franchisees a lot of freedom in taking the concept to market is that birds can be very different in every single market,” Carpenter said. “Most franchises, their ultimate customer is people. And of course our customers are people, too, but they’re buying for the birds.”

Carpenter said he grasped the importance of bird-food sales back when he opened his first store more than three decades ago in Broad Ripple.

“When I started the business in 1981, I had no business education, but I knew two things—have a niche and have a ‘consumable’ that customers were going to have to come back and buy over and over,” he said.

That “consumable” is, of course, bird food—the ink cartridge of the Wild Birds Unlimited business model. The stores sell bird feeders, binoculars, feeder stands, birdhouses, and shirts with birds on them, but the big profit center, and the thing people return for again and again, is seed.

There’s just one hitch. Bird food is possibly the most discretionary of discretionary purchases. It’s not even as though the birds will starve if they don’t get it. They’ll just take their meals in someone else’s back yard. However, to a certain segment of the birding community, that’s entirely unacceptable. And that’s the segment to which Wild Birds caters.

“What Wild Birds has done is define their target audience,” said Butler University Associate Professor of Marketing Daniel McQuiston (who keeps three feeders in his yard).

“Every business operates by the 80/20 rule. Eighty percent of your business comes from 20 percent of your customers. They focused on the 20 percent—the hardcore birders. What are they really after? Feeders, feed, probably a few ancillary items. The other big thing they’re after is expertise. So they trained their people to focus in on what they really want.”

Serving that hardcore audience requires a broad range of seed. The company offers everything from a no-mess blend to a special mix for ground feeders to one with extra calcium to promote strong eggshell development. There’s even a peanut butter/suet/cornmeal paste that’s spread on tree trunks. Carpenter developed it himself over the course of a couple of decades. Carpenter keeps about 15 birdfeeders at his rural Zionsville home, and goes through about 60 pounds of birdseed monthly, along with mountains of suet and mealworms.

Though he’s undeniably the master of his retail niche, Carpenter sees plenty of room for expansion—especially as the economy improves.

“The recession affected most of the franchising because of the difficulty of borrowing startup funds,” he said.

“We would like to expand more quickly,” Carpenter said. “I believe many folks that would love to feed the birds just have not had the opportunity to have a really good hobby store introduce them to the hobby and to products that work really well. I just don’t think there are enough people feeding birds.”•