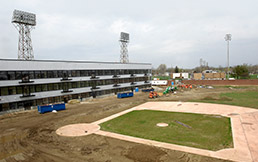 Apartment developers continued their blitz on the downtown market with several projects under construction or in the planning stages.

If the new units are all occupied, the downtown population will increase by about 5,300 people.

Among the larger downtown apartment projects were three redevelopments—the Indianapolis Fire Department headquarters property near Massachusetts Avenue, a portion of the former Market Square Arena site, and the property of The Indianapolis Star headquarters. The second phase of Artistry also was unveiled. All told, the four would add more than 1,500 units to the market.

The first phase of Artistry calls for 258 apartments and up to 68,000 square feet of first-floor commercial space that will open in sections. Construction will continue into spring.

National studies are finding fresh demographic populations interested in living in downtowns: millennials, those 30 and younger, and empty-nesters over 50.

Most downtown apartment projects are part of mixed-use developments featuring office or retail space on the ground level. One drawback: Much of the retail space has sat empty, unable to keep pace with the residential units being built.