Some of us have been lucky enough to have driven a 600-horsepower Lamborghini really fast around the cones.

The electric-powered Tesla Model S corners a lot like the Lamborghini and has more than twice the range of the Leaf.

That’s the basic takeaway after driving the Model S before the California automaker opened its first Indiana store in December at The Fashion Mall at Keystone.

Let’s put it this way: If your BMW 3 series can stay glued to the hairpin ramp from northbound Keystone Avenue to eastbound Interstate 465 as well as the Model S, count yourself lucky. 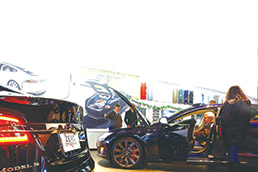 No need afterward to use a spatula to peel your left cheek from the driver’s side window. Credit not just the design of the suspension geometry but also plain old physics, as the 1,200 pounds of batteries built into the floor of the Model S place its center of gravity somewhere south of, oh … Australia.

It didn’t hurt that this model—starting at a whopping $63,570—also had optional, 21-inch wheels wider than Aunt Mabel’s caboose after Thanksgiving dinner.
Despite lightweight, aluminum body panels that include an elegant hood curve visible through the windshield, the Model S feels as solid as the usual suspects from Deutschland. That’s saying something given that its pedigree is not from Bavaria or Stuttgart but rather from that computer bastion of Palo Alto, Calif.

“We set out to build a car with no compromises,” said Tesla spokeswoman Alexis Georgeson.

Quirky, unconventional
You be the judge of that, as there are some oddities about this engineering marvel from the fertile mind of Tesla founder Elon Musk, who in his spare time launches Space-X rockets to supply cargo to the International Space Station.

First and foremost in the Oddity Department is the action of the accelerator pedal.

Step on it and expect massive, seamless thrust at the rear wheels (0-60 mph in 5.9 seconds for the basic battery and 4.2 seconds with the optional battery pack). But let up on the pedal and the car begins to decelerate sharply, rather than coast.

It’s the electric motor taking it as a sign to work backward to generate electricity for the batteries. It’s here where the Model S feels almost like a golf cart. But once you’re used to the sensation, it’s actually welcome, such as when you need to halt for a fast-changing red light.

The car’s brakes are needed to finish the job only at the last moment. As such, the brake pads should last the equivalent of a geological epoch. 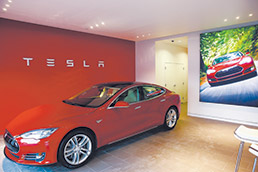 The Model S can cruise up to 265 miles on a charge and seat as many as seven passengers, with optional cargo area seats. (IBJ photo/ Aaron P. Bernstein)

If the degree of deceleration gets on your nerves, you can adjust it via a setting on the car’s absurdly humongous touch screen, in the center console.

This is oddity No. 2. The 17-inch screen running vertically up toward the windshield seems almost a self-parody of automakers’ digital-integration craze coming to a dashboard near you.

If “Saturday Night Live” did a skit mocking millennials’ obsession with connectivity, the Model S would be a ready-made set. Just think, the driver of the Tesla behind you on the freeway has a full Web browser just inches from his face.

“Navigate to Fridays,” Georgeson tells the car, and up pops a map of all the Friday’s restaurants in Indiana. It almost feels like driving an oversized iPad.

The touch screen is also where the driver controls functions such as heating and A/C, ride height and steering input levels. Want to open the panoramic sunroof? Pushing a plastic button would be too quaint: In the Tesla, you pluck a little icon on the touch screen. Unlike an iPad, the screen is easily read in the daylight.

The speedometer binnacle is electronically displayed, including a fever chart depicting electric consumption that would confound even a Rand Corp. analyst. Here’s hoping a Tesla motorist doesn’t try to learn what it means while driving.

A large needle image swings into a green or orange zone to give the driver an idea of how much power is being sucked from the batteries. It’s well-placed, front and center, to help you drive more efficiently

Space-wise, the car is larger inside than it looks outside. The back seat can easily hold three full-size humans, thanks in part to the absence of a driveshaft tunnel on the floor. The five-passenger car can hold seven if you order optional seats for the cargo area.

Despite the absence of an internal combustion engine to warm up the car on a recent 20-degree day, there was ample heat—instant, battery-powered heat. Easy does it, though, or you’ll likely nibble away at range.

Despite a range of up to 265 miles if you order the 85 kWh battery upgrade (about $10,000 more), the Tesla still doesn’t go as far without refueling as a petroleum-powered vehicle will. That’s a problem if you travel cross-country on business.

Tesla is trying to nip that problem in the bud by installing rapid-charging stations, including the first one in Indiana along Interstate 80 in Mishawaka.

It plans four other stations along major routes in Indiana that can allow a driver to pick up half a charge in about 30 minutes.

There’s another thing to consider about owning a Tesla in Indiana. The company doesn’t have a service garage here. Georgeson said that’s not a problem because Tesla has a number of mobile technicians, known as rangers, who can show up at your doorstep.

As the Model S doesn’t have as complex a mechanical system as a conventional car, “very rarely do we ever have to put the car up on a lift,” she said.

In fact, some of the service involves mere software upgrades.

Still, you’ve got to wonder what happens if the car needs major structural repairs. Tesla said it has procedures in place, but not having a physical service center offering the kid-glove kind of perks luxury-car owners expect might take some getting used to.

The car has a four-year, 50,000-mile warranty. The basic battery pack is covered for eight years/125,000 miles; the up-level pack is eight years/unlimited miles.

If you take the plunge, expect to wait anywhere from three weeks to three months for delivery. Much like the early days of General Motors’ Saturn unit, the Tesla Model S is built to a customer’s specifications. Also like Saturn, the store is a low-pressure kind of place without car-lot vultures ready to pounce.

Flat-screen panels hanging on the wall allow shoppers to find answers to basic questions such as cost to charge. Based on the national average price of electricity, one can “fill up the tank” with electricity good for almost 300 miles for just $12.

Tesla has begun taking orders on an SUV version, known as the Model X. Deliveries are expected to begin this year.

Consumers can also buy used versions of Tesla’s first production car—a Lotus roadster that was stripped of its gasoline power train and equipped with electric motor and batteries. The diminutive car has since gone out of production.

In 2010, Tesla purchased on the cheap the former factory and tooling of New United Motor Manufacturing Inc., in Fremont, Calif., for a mere $42 million, just as the auto industry was recovering from the recession.

NUMMI was a former joint venture of General Motors and Toyota.

With range approaching that of some gasoline-powered cars, the Tesla Model S is the one all-electric car that’s finally practical enough for daily use for those who make a long commute.

But it’s not necessarily cost-effective.

Wisely, Tesla is hoping to clinch the deal on the emotional side of the equation, with the athletic style and performance attributes of an Audi, BMW or Mercedes-Benz.

Upstart Tesla remarkably might have pulled off both feats—but whether it can break the electric-car-cynicism barrier is yet to be seen.

Who, after all, isn’t rightly cynical about electric cars after the demise of Think! and the bankruptcy of Fisker? How many motorists during times of high gasoline prices have flirted with the idea of something like a Nissan Leaf but then worried that its 75- to 100-mile range on a charge won’t cut it as an all-around family car?

How long will the high-tech batteries last? What will they cost? Will Tesla last as long as the warranty?

We’re just getting started, but you get the point.•