The YMCA of Greater Indianapolis plans to break ground next month on a $22 million facility in the CityWay development.

Trustees of the not-for-profit in May gave their approval to start the project July 16, after the YMCA cleared a $17 million fundraising benchmark necessary to trigger construction. The organization will raise the rest as building proceeds. 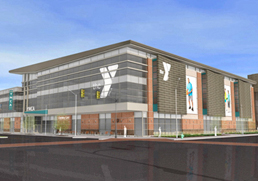 The new facility will feature two swimming pools on the first floor and three full-size gyms on the second floor. (Image courtesy YMCA)

The facility should be open by the end of next year, said Eric Ellsworth, CEO of the YMCA of Greater Indianapolis.

“This will not only serve the downtown work force, but children on the southeast side,” he said. “That’s what a market study showed, so we’re excited about that.”

The YMCA of Greater Indianapolis operates 11 facilities in the area, including two downtown. But those facilities, in the Athenaeum and City Market, are considered “express” YMCAs because they don’t have pools or gymnasiums.

The new facility will feature two swimming pools on the first floor and three full-size gyms on the second floor.

Of the 50 largest cities in the country, Indianapolis is the only one without a downtown full-service YMCA, Ellsworth said. The YMCA had considered building on part of the former Market Square Arena site but ultimately deemed it too close to its City Market location, which is just across Alabama Street.

“In the early years, the YMCA was an urban mission, so it was always in the heart of downtown,” he said. “When suburban life began, probably in the 1950s or 1960s, YMCAs starting popping up in suburban areas. And now we’re coming back to the center of the city.”

The YMCA’s mixed-use development will be on the southeast corner of Delaware and South streets, south of the Alexander Hotel in CityWay, on what is now a parking lot for Eli Lilly and Co. The glass on the upper two floors will face South Street to give patrons a view of downtown.

Lilly will lease the ground, and The Lilly Foundation, the drug manufacturer’s philanthropic arm, contributed $5 million toward the cost of the facility.

It will serve as the headquarters for the YMCA’s "Top 10 by 2025" initiative, which has a goal of making Indianapolis one of the healthiest cities in the country within the next 10 years.

Monthly YMCA memberships depend on income levels but typically range from $20 to $40 for an individual and from $40 to $80 for a family.

The architect for the project is Browning Day Mullins Dierdorf Architects and the contractor is Shiel Sexton Co. Inc.

Developed by Buckingham Cos., CityWay includes the 157-room Alexander, 320 apartments and 40,000 square feet of retail space.

Yolk, a Chicago-based upscale breakfast eatery, is set to open by the end of the month and will join Cerulean and Qdoba as restaurant tenants at CityWay.