OOLITIC—In February, Indiana Limestone Co.—a business that seemed as ageless as the product it has sold for 88 years—hit rock bottom.

But just five months later, the company with operations in Oolitic and Bloomington is digging out and looking at a brighter horizon.

The company spent most of 2013 selling off its limestone inventory to sustain operations and pay down debt. ILC officials ran quarries at less than 20 percent of normal rates, to contain costs, and dozens of workers were let go.

Days before the company was scheduled to open its quarries for the annual March-to-November season, it filed for bankruptcy and prepared to lay off the remainder of its staff, which just a year earlier stood at 166 employees. It was a stunning fall for a company that had merged with the Victor Oolitic Stone Co. in a much-ballyhooed deal just four years prior.

Suddenly, ILC—which operates quarries dating back to the 1800s—didn’t look nearly as durable as the stone it unearthed to help build the Empire State Building, the Pentagon, 35 state capitols and many other venerable U.S. landmarks.

“In a way, it was kind of unbelievable,” said Todd Schnatzmeyer, executive director of the Indiana Limestone Institute of America Inc., a Bedford-based trade group. “Their failure was never a demand issue; the demand for this product has never faded. Their failure was a business issue. It had to do with the way the company took on debt and dealt with it.”

In 2010, ILC was bought by Cleveland venture capital firm Resilience Capital Partners, which merged it with Victor Oolitic. Combining two of the biggest limestone companies in the state was supposed to create an operation big enough to endure economic tumult and downturns in the construction industry. Instead, ILC officials said, it created an operation with debt it simply couldn’t shoulder during a deep recession and slow recovery.

The company’s slide rippled through the industry. Some news accounts predicted the death of the industry—a limestone tombstone no doubt at the head of its grave.

“Some of the challenges the Indiana Limestone Co. went through caused a lot of questioning of our industry,” Schnatzmeyer said. “No one was celebrating their demise.”

Where others saw peril, officials for a Chicago-based investment firm saw promise.

In April, Wynnchurch Capital Ltd. (which had been buying up the company’s distressed debt) bought Indiana Limestone Co. out of bankruptcy, agreeing to take over $26 million in secured debt.

“The company didn’t lose money, but it wasn’t sustaining itself,” Bourne said. “The company was shrinking. We knew immediate operational changes were needed.”

So Wynnchurch invested $2 million in new equipment and other infrastructure to increase production. It hired back many of the laid-off quarry workers, craftsmen and stone-cutters and made new hires, too. The company now has 145 full-time employees, about 80 working in two large quarries and another 40 at a sizable stone-cutting operation on the southwest edge of Bloomington.

In May, Wynnchurch hired as CEO Tom Quigley, a 56-year-old building-trades veteran who had worked stints as an executive at Owens Corning, United Technologies and Ingersoll Rand. Quigley changed operations, made new executive hires, and improved efficiencies.

In June, ILC brought in 150 customers and potential customers from New York to California to Vancouver to South Carolina, showing off its investments and promising to invest “significantly more” the next three years, Quigley said. 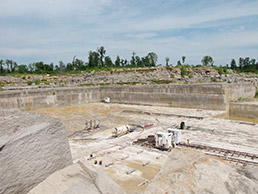 “It was so important for them to see our yard, our quarries, our fabrication plant and meet the new team,” said Duffe Elkins, a 23-year ILC veteran and its chief operating officer. “They wanted to make sure we were doing what we said we were doing.”

Visitors to ILC’s Oolitic plant are greeted by a storage yard filled with hundreds of pieces of massive stone, bathing in the sun and elevated on blocks a few feet off the ground. The aging process transforms limestone’s buff or grayish colors into the coveted silver.

Farther back through an expansive network of bumpy dirt and gravel roads lie two massive quarries—the Victor and the Empire. The second quarry is so named because stone was pulled from it to build the Empire State Building in New York.

The hole where the stone for the Empire State Building was extracted has refilled with a tropical-looking blue-green water, its peaceful nature a stark contrast to the roar of daytime activity surrounding it. 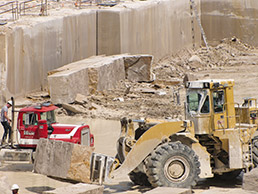 Unlike last year, when only five or so people worked ILC’s quarries, the place now bustles with dozens of workers, pickup trucks, dump trucks and flatbed semitrucks full of enormous stones.

The workers use new front-end loaders and other equipment to carve out, lift, wash and inspect blocks weighing 15,000 to 22,000 pounds each.

It’s a long way from the process just 30 years ago, when men used sledgehammers and wedges to pry the stone from the earth.

“This industry is still man versus stone,” mused Elkins. “But there have been a lot of technical advances in the last two or three decades.”

Less than 10 miles north of this Oolitic site, on the south edge of Bloomington, stones are cut by computer-driven saw. The cutting facility is growing, with plans for a large break room and offices. Productivity is up 50 percent over last year and project lead time has been cut from six weeks to three.

Many industry observers are taking a wait-and-see approach to Wynnchurch’s changes.

“When the new ownership came in, there was a sigh of relief,” Schnatzmeyer said. “But everyone is taking a deep breath now to see how all this goes. The success of this company is in the best interest of everyone in the industry.”

The southern Indiana limestone industry is composed of seven other—smaller—quarry companies and 30-plus fabrication companies and other craftsmen.

This year, the company will quarry almost twice as much limestone—1.6 million cubic feet, or 124,000 tons—as it did any of the last three years, ILC officials said. ILC is forecasting another 40-percent to 50-percent increase next year from its operations in Monroe and Lawrence counties, 60 to 75 miles south of Indianapolis.

ILC declined to divulge financials details, but Quigley said revenue will be up a solid double-digit percentage from a year ago. He added that, due to new operational efficiencies, the company is profitable and profit is growing.

“We’re working two shifts and the guys in the quarry are working overtime and Saturdays to meet the demand,” he said.

Demand is so high, Elkins said, that ILC is considering starting a third quarry next year, on 400 acres it owns in Bloomington.

ILC officials are the most optimistic about long-term potential. The company owns 4,500 acres, but is currently quarrying only 2,000 of those. Only four to six acres per year are required to supply the stone ILC sells now.

Demand has been consistent for Indiana limestone since quarry companies began pulling it out of the ground in the 1800s—primarily in Lawrence, Monroe and Owen counties. It’s used widely not only nationally, but also in local projects that include Bankers Life Fieldhouse, Eli Lilly Co. Inc.’s corporate headquarters, the Indiana State Museum, Eskenazi Hospital and most of the buildings on Indiana University’s Bloomington campus. Its two biggest markets, company officials said, are commercial and institutional buildings.

From the 1940s through 1960s, it was commonly used in homes—even modestly priced ones—until manufactured-housing materials took over. Still, residential real estate is Indiana Limestone Co.’s third-biggest market, followed by the landscape industry.

Indiana limestone remains one of the most sought-after materials for “high-end projects,” including upscale homes, said Bill Browne, CEO of Indianapolis-based Ratio Architects.

“It’s a timeless material,” Browne said. “All you have to do is look at the IU campus to see its value.”

There’s no comparing the quality of Indiana limestone to that from other states such as Texas, Ohio and Kentucky, Browne said.

“That’s not a local bias. That’s a proven fact,” he said. “It has better density and consistency, has few imperfections, and doesn’t crumble or turn to powder. It looks absolutely splendid.”

Steve Riviere, owner of New Jersey-based International Dimensional Stone, said Indiana limestone is the most sought-after on either coast.

“I can get limestone closer to me and cheaper. But it simply doesn’t have the quality of Indiana limestone,” Riviere said. “The side of the Atlantic City Convention Center directly facing the Atlantic Ocean is made with Indiana limestone. It’s taken the beating of hundreds of hurricanes and it’s still flawless. No other material matches it for durability.”

A series of factors came together about 350 million years ago when southern Indiana was a “shallow tropical sea much like the Bahamas today” to create the massive amounts of limestone deposits in and around the hills of Bloomington and Oolitic, said Todd Thompson, executive director of the Indiana Geological Survey, an Indiana University research institute.

“The conditions that persisted here all those millions of years ago gave rise to a lot of critters that were made of calcium carbonate and when that material was compressed with other materials, it became the limestone that we know today. It’s what is formed 30 to 60 feet below ground today,” Thompson said.

When that limestone began to be unearthed about 150 years ago, it gave rise to a sizable industry.

“Because of the history of the area with limestone, [Indiana Limestone Co.] has amassed a staff of really talented people in working with this material,” said John Carlson, project manager for Boston-based CBT Architects, which in 2012 incorporated ILC’s limestone on the $300 million, 22-story Liberty Mutual office tower in downtown Boston. “We’ve come to count on that expertise.

“We were sad and upset when we heard ILC might close down,” he added. “We were overjoyed when we heard they were back on their feet. We very much want to see this new effort succeed. And we’re not alone.”•