Update: The governor's office contacted IBJ Tuesday night, several hours after this story was first published, with this statement about the gates: "Our security experts tell us that  gates will help prevent unexpected vehicles from entering the residence grounds from either Meridian Street or 46th Street, something which happens multiple times a day and raises security concerns."

For the first time, the state of Indiana plans to install security gates at the driveway entrances to the governor's residence at 46th and Meridian streets.

The Meridian Street Preservation Commission on Aug. 19 unanimously approved a design that calls for wrought-iron gates supported by brick columns, Chairwoman Kathleen Blackham said. (To see a copy of the application and a line-drawing rendering, click here.) 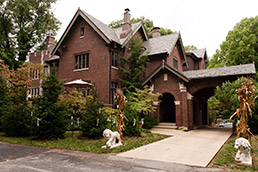 The brick columns that hold that gates will match materials on the property. (IBJ Photo/Eric Learned)

The gates, one at each entrance, will be a big change for passersby on traffic-heavy Meridian Street. The unassuming English Tudor-style mansion blends so well with the neighborhood, Blackham said, "If you were from out of town, and you drove through there, you wouldn't think it's the governor's mansion."

Several of Gov. Mike Pence's top staff members, including General Counsel Mark Ahearn, presented their case to the commission, but they didn't go into much detail about what's driving the need for the gates, Blackham said. Although there's no fence or wall surrounding the 6-acre property, Ahearn testified that the gates should solve whatever problem the residence is having with intrusions, Blackham said.

Local activist Clarke Kahlo said he's worried that the governor's office is planning to eventually wall off the property. A member of the governor's staff stated during the commission hearing that there are no present plans to put up a fence or a wall, Kahlo said, but he still worries that the property will become less accessible to the public.

Kahlo said the governor's staff didn't make a strong case there's a security problem, and he said he doesn't see the point of installing gates without a fence. "Almost any Toyota can pop that curb and be on the property in a heartbeat," he said.

Governor's spokeswoman Kara Brooks wasn't available for comment Tuesday morning about the plan for the gates. Last year, the Governor's Residence Commission discussed installing security gates, along with other upgrades to the residence, but Brooks said early this year that those plans were on hold until the money can be raised by the Governor's Public Building Foundation.

The governor's office didn't say how much the new gates might cost or how soon they'll be installed, Blackham said. The Meridian Street Preservation Commission only requires that any work it approves be completed within two years, she said. The governor's office said Tuesday night that "we anticipate starting construction as soon as sufficient private funds are raised."

Created in the 1970s, the preservation commission reviews designs for changes to buildings in the North Meridian Street corridor. The commission, which is made up of gubernatorial appointees and representatives of surrounding neighborhoods, voted 8-0 in favor of issuing a certificate of appropriateness for the gates, said Blackham, who is also a city planner.

The commission tweaked a few elements of the governor's design, Blackham said. There will be no plaques on the brick columns, which will match the brick used in the guardhouse, she said.

Unlike former Gov. Mitch Daniels, Pence and his family made the Meridian Street mansion their main residence.