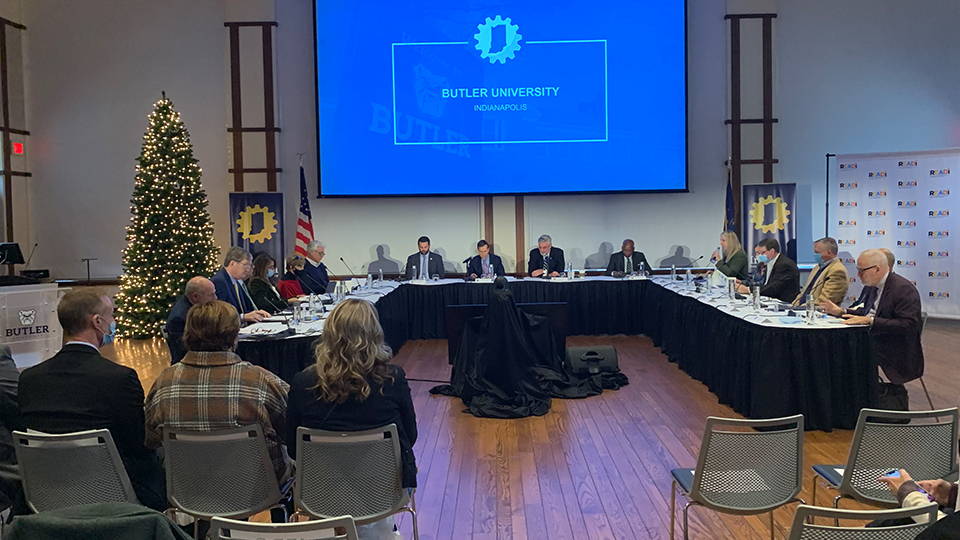 The IEDC board approved $500 million in quality-of-place grants for regions across the state. (Photo by Gerry Dick, Inside INdiana Business)

Seventeen regions representing all corners of Indiana will each get a slice of $500 million in state-funded regional grants, with $65 million going to regions in the Indianapolis metro area.

The Indiana Economic Development Corp. Board of Directors, chaired by Gov. Eric Holcomb, on Tuesday awarded maximum grants of $50 million each to five regions outside the Indianapolis area.

Regions closest to Indianapolis received grants of $20 million or less—all as part of the state’s Regional Economic Acceleration and Development Initiative, or READI, a grant program aimed at improving communities to generate growth and attract business.

“Now the real work starts,” Holcomb said. “This was about appropriating $500 million to approve the plans and, so you know, today and tomorrow and every day hereafter for the next few years, each region will be working with the IEDC on those individual projects.”

The White River region consisting of Marion, Hamilton and Madison counties is one of three central Indiana regions to receive a $20 million grant. The 180 Alliance in Johnson, Morgan, Hendricks, Boone, Montgomery and Putnam counties, and Accelerate Rural Indiana in Shelby, Rush and Decatur counties also will get $20 million.

Another regional plan focused on Hancock County and eastern Indianapolis will receive $5 million for projects focused on building quality of life in the area and creating housing, workforce training and infrastructure programs.

The proposals were judged based on their economic development potential, their focus on Indiana’s rural communities, the degree of regional collaboration, and their alignment with the state’s economic development priorities. Opportunities for population growth were also taken into account.

The grant program also requires each region to provide at least $4 in matching funds for every $1 awarded by the state.

“The collaboration between separate counties and cities, between various agencies and departments, with private sector stakeholders and funding sources has been extraordinary, exciting to watch, and hopefully, the foundation for continued coordination in the future, ” said Brad Chambers, Indiana’s Secretary of Commerce.

Mark Wasky, IEDC’s vice president of innovation and strategic initiatives, said the IEDC recognizes central Indiana is where most of the state’s growth is occurring. The goal was to not ignore the region, while also investing to foster growth in the rest of the state, he said.

“The thing that came across our minds was the need to invest in opportunities for growth, and with Central Indiana being the largest regional economy in the state, we couldn’t ignore that,” Wasky said.

“We do hear that quite often at the IEDC that there seems to be a focus on certain areas of the state but at the end of the day, we’re focusing on supporting as many communities as we can, in an effort to grow the state’s population and continue and sustain our economic growth.”

Noblesville Mayor Chris Jensen told IBJ last week that even if the region did not get the whole $50 million, all 15 projects will still happen. He said the region was intentional in picking projects that were viable and needed, but not reliant on extra state government funding. Most of the projects outlined are already in the works with some attached public and private investments.

“All these projects are viable and will happen and can happen on their own. It’s just going to take some more strategic out of the box thinking,” Jensen had said. “We certainly can’t go back to our constituents and say, ‘Oh, well, we didn’t get this grant, so this massive, incredible project can’t happen.”

Economic development leaders in each of the regions will now have to decide how the funding is spread out across all the projects in their plans, particularly if they didn’t receive all the money they requested.

Jensen last week said his intent would be to spread the money awarded to the White River region equally among its 15 project proposals. It was not immediately known how the grant money would be disbursed in other central Indiana regions whose grant requests were not fully funded.

The grant request for the 180 Alliance in west central Indiana includes funding for a $123 million mixed-use development at the soon-to-be I-69 interchange at State Road 144. The White River Crossing project would cover 127 acres in Johnson and Morgan counties and include hotels, retail centers, a theater, medical services and a 300-unit multi-family housing development. Portland, Oregon-based Grove Development would be the developer.

The partnership involving Shelby, Rush and Decatur counties and the city of Batesville envisions creating more quality housing and creating new parks and community amenities to attract new residents and stem rural population loss.The plan includes 40 projects that total more than $800 million, with a heavy focus on developing 13 housing complexes from apartments to single-family subdivisions along the Interstate 74 corridor in Greensburg, Rushville, Batesville and Shelbyville.

The five regions to receive full $50 million grants are northwest, northeast, southwest and southern Indiana, plus the South Bend-Elkhart area.

“We’re really impressed with the overall quality of submissions from across the state and wanted to ensure that we are able to maintain momentum,” Wasky said. “Many regions have taken a big first step here and engaging with one another and mapping out a plan for their future.”

But this round of grant funding may be only the beginning. Gov. Eric Holcomb told IBJ last week that he plans to seek more money for READI from the Legislature in 2023 when the state’s two-year budget is crafted.

The grant program requires each region to provide at least $4 in matching funds for every $1 awarded by the state.