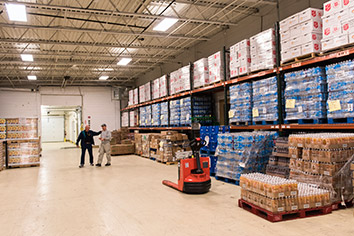 One of Gov. Mike Pence’s favorite charities is Midwest Food Bank, a faith-based alternative to Gleaners, the region’s dominant player in hunger relief.

It’s not surprising that Pence, an evangelical Christian, would support a faith-based food bank, but there’s more setting Midwest apart than a Bible verse (Matthew 25:35) emblazoned on the wall.

Prayer is integral to Midwest, which steers clear of a federal program supplying meat and produce to most food banks. That approach offers a window into Pence’s decision last month to forgo up to $80 million in federal funds to expand access to preschool for low-income families—a move many observers found puzzling.

If the hunger-relief world is any indication, specific instances of federal intrusion don’t matter so much as the perception that government funding hamstrings religious expression. And many preschools are run by churches.

Pence’s decision disappointed and surprised champions of Indiana’s foray into preschool funding, a $10 million pilot program that passed the Legislature at Pence’s urging. The governor, who initially rejected Obamacare money to expand Medicaid in Indiana, consistently resists federal intrusion, but that’s not enough of an explanation for Indiana Chamber of Commerce education lobbyist Derek Redelman.

“What are the specifics?” he wondered.

Pence did not respond to questions from IBJ about his particular objection to the federal government’s preschool development grant, and he also declined to discuss his support for Midwest Food Bank.

After his election, Pence used inaugural activities as food drives for Midwest, gathering 1,475 pounds of food and raising $2,521. For the past two years, he and state employees have held a pumpkin sale on the Statehouse lawn to benefit the food bank.

Pence has supported Midwest Food Bank since his election.

Observers are surprised by Pence’s rejection of federal dollars for preschool in part because Pence has been vague about his rationale. In a letter to the Indianapolis Star, he said the federal program required Indiana to expand its preschool pilot even before it was up and running.

“Indiana’s program is based on parental choice and includes the flexibility and accountability needed to ensure children are in programs that get real results,” Pence wrote. “It is important not to allow the lure of federal grant dollars to define our state’s mission and programs. More federal dollars do not necessarily equal success, especially when those dollars come with requirements and conditions that will not help—and may even hinder—running a successful program of our own making.”

John Whitaker, executive director of Midwest Food Bank in Indianapolis, acknowledges that the meat and produce supplied by The Emergency Food Assistance Program, or TEFAP, is “good food.”

But, Whitaker said, “a lot of agencies we serve don’t take TEFAP food because they’re not allowed to share the Gospel along with the giving of the food.”

A program of the U.S. Department of Agriculture, TEFAP is administered by the Indiana State Department of Health, which works with Gleaners and 10 other food banks in defined territories.

Whitaker said Midwest has its own sources of fresh food, including a small farm planted beside its warehouse along State Road 37 South.

Midwest’s Indianapolis division has grown quickly since opening in 2008. It serves 300 food pantries and other charities in 53 Indiana counties. Because it’s not part of the TEFAP program, Midwest isn’t constrained to territorial boundaries, and Whitaker thinks that contributes to the food bank’s financial efficiency.

The Indianapolis division distributed 16 million pounds of food on a budget of $560,000 last year, Whitaker said. With a staff just short of five full-time people and 3,500 volunteers, Midwest’s overhead is about 1 percent, even less than Gleaners’, though both receive a four-star rating from Charity Navigator. Based in Bloomington, Illinois, Midwest has five locations.

Most of the 250 charities that get food from Gleaners are faith-based, and 60 of them participate in TEFAP. To Hubert, the federal restriction on prayer is a minor impediment, considering the nutritional value of the food.

“It’s that simple,” Hubert said. “Those regulations to distribute the government food are very minimal, quite frankly.”

That’s not the way Whitaker describes it: “There’s lots and lots of strings attached to that food,” he said.

It would be difficult to understate the importance of prayer to Midwest’s operation.

When volunteers from pantries arrive for distribution day, Whitaker said, he and his crew ask whether they’d like to pray.

Sometimes the prayer is for problems in the ministries, but it can also be for personal struggles, Whitaker said.

“A lot of these pantries are in needy areas, where the people actually serving are needy,” he said. “And so they’re just really sacrificially giving, so they really appreciate a word of encouragement.”

One of Midwest’s major suppliers is PepsiCo because of Whitaker’s connection to an employee at the Plainfield plant. After the death of her son in 2008, the employee asked for donations to Midwest in his memory. Whitaker went to pick up the food, and when he met the woman and heard her story, he asked whether he could pray with her. They prayed for 45 minutes, he said.

“That’s why we’re here,” Whitaker said. “To me, it makes no sense to just feed someone for a day when you can give them hope for an eternity.”

There are other differences between Midwest and Gleaners. Midwest doesn’t charge partner agencies a fee for food. Midwest specializes in disaster relief, while Gleaners works closely with schools to send kids home for the weekend with backpacks full of food.

Whitaker, a former grocery-chain manager, said he sees a lot of inefficiency in the food bank system. He also thinks it would be impossible to feed all hungry people without some form of government assistance.

He and Hubert insist that the two food banks, which serve many of the same agencies, complement each other’s work toward the same goal.•