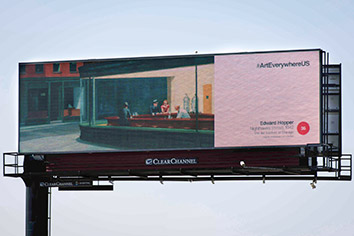 The sponsor of a City-County Council resolution that would lift a ban on digital billboards plans to delay a vote scheduled for Monday and send the measure back to a council committee.

Councilor Mary Moriarty Adams, a Democrat, said in an interview late Monday afternoon that she plans to move back a council vote on the proposed changes to February at the earliest. The proposal appears on the Dec. 1 council agenda.

Moriarty Adams said she wants the council's Metropolitan and Economic Development Committee to revisit the proposal at a meeting Jan. 26. That would give billboard companies Lamar Advertising, Clear Channel Outdoor and CBS Outdoor plenty of time to meet with concerned neighborhood groups before the council takes up the measure in February, she said.

“There are several organizations that want this publicly vetted, and I agree with that,” Moriarty Adams said. “Tonight, by sending it back to committee and a time certain, this gives the billboard reps about eight weeks to go meet with representatives (of various neighborhood groups).”

Proposal No. 250 urges the Metropolitan Development Commission to draft a change to zoning ordinances addressing digital billboards, which are effectively banned in Marion County. The proposal also suggests specific language, which was drafted by lobbyists for the billboard industry.

"Public vetting has not occurred, unfortunately," said Republican council member Jeff Miller, who voted against moving the measure to the full council and encouraged Moriarty Adams to put off a council vote. "Public vetting is critical."

The unusual process, including the origin of the proposed changes (billboard-industry lobbyists, not the MDC as is typical in zoning changes) and a limited opportunity for public input, has neighborhood groups crying foul.

“I am appalled—appalled at this proposal being submitted by a lobbying group for the billboard industry and this city council even considering this proposal,” Norman Pace of the Marion County Alliance of Neighborhood Associations said at the Nov. 17 meeting.

At the meeting, Councilor Miller asked whether the city's professional planners would weigh in at some point on whether the changes are appropriate for the city's landscape. Jeff Roeder, deputy director of the Department of Metropolitan Development, said the department lacks the staff to devote time to evaluating the proposal.

Marjorie Kienle of the Lockerbie Square People's Club said the billboard companies and their supporters are trying to push the changes through "as fast as possible."

"The bill has clearly avoided proper public input," she wrote in an email. "This is just plain wrong."

Marion County effectively shuts out digital billboards through zoning ordinances that ban “flashing, intermittent or moving light” and “animation” on advertising signs. There are exceptions, including a digital billboard at the Indiana State Fairgrounds on Fall Creek Parkway that was allowed because it’s on state property.

Miller and Democrat Vop Osili voted against advancing the new proposal, although Miller said he thinks the industry, which has been lobbying council members and Mayor Greg Ballard's administration for three years, had come up with a plan that addressed many of his constituents' concerns. He said he would ultimately vote against the changes if the billboard companies don't satisfy the concerns of residents.

The proposal suggests that the city allow digital billboards only in place of traditional billboards. And if allowed to convert an existing billboard to digital format, the owner would also have to take down an equivalent amount of billboard space elsewhere in the city.

This story has been updated.