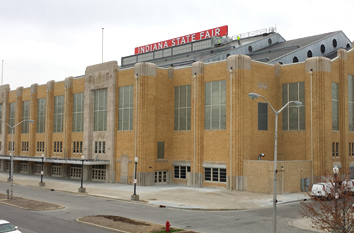 The iconic Indiana State Fairgrounds Coliseum recently got a major facelift, and now it’s getting a new moniker.

The 75-year-old facility on 38th Street in Indianapolis’ midtown district is now the Indiana Farmers Coliseum.

Part of the naming-rights deal will include perching the comic-strip cat Garfield on the facility’s roof. The cat created by Hoosier Jim Davis is part of Farmers' marketing campaign.

Per the Fuel’s 10-year lease deal signed earlier this year with the Indiana State Fair Commission, the hockey team gets to pocket the $6 million from the naming-rights deal. Fuel officials handled the deal.

State Fairgrounds Executive Director Cindy Hoye, whose approval of the deal was required, deemed Indiana Farmers the “perfect partner” due to the company’s interest in “serving Hoosiers.”

After reading earlier this year about the search for a new title sponsor for the venue, Indiana Farmers Chief Operating Officer Glenn Toren reached out to Fuel officials who were leading the search.

“It was the right time for us to make this move,” said Indiana Farmers CEO Kim Smith. “We’re in a growth mode and we’re redefining our company. This is a perfect move for us to further our brand in the state and to communicate to current and prospective customers.”

In addition, Smith said, the deal fits the company’s plan “to play a more active role in the community” and could also be a tool to attract new sales agents.

The deal was signed after three months of discussions between Indiana Farmers and Fuel officials and “lots of exploration, research and analysis” by the insurance firm, Smith said.

The Fuel received interest from local and national companies, but Indy Fuel President Sean Hallett was pleased his team could ink a deal with a locally based company.

“They’re local, so they understand what we’re about and what the heritage of this building means,” Hallett said. “They’re big, but they’re not too big. This will be the cornerstone of their marketing budget, so we know they’re going to be involved with this building, our franchise and other tenants here such as IUPUI basketball in a number of ways.”

Indiana Farmers has been in business since 1877. It provides auto, home, farm and business insurance throughout Indiana.

The name change is immediate. Early next year, a new sign will go on the building touting the name change. Adjustments are currently being made to the State Fairgrounds web site, event listings, staff uniforms and other communications materials, Fairgrounds officials said.

Indiana Farmers’ name will soon be added to the ice surface around the face-off circle at center ice. In addition to the Indiana Farmers Coliseum moniker being added to the roof of the facility, a giant statue of Garfield will be positioned atop the roof.

Two years ago, Indiana Farmers signed a deal with Indiana-based Paws Inc. to use Garfield as the company’s mascot. At that time, the company began to handle more marketing centrally rather than relying on individual agents to do most of the marketing and advertising, Smith explained.

“One thing we said from the start, we’re not just going to put a sign up with our name on it,” Smith said. “We’re all in for 10 years. We’re going to use this for community engagement and service.”

Farmers Insurance’s plans for how to leverage and market the deal are still being formulated, Smith explained, but she envisions the company hosting or being a part of various company- and community-related events at the facility.

While Smith declined to divulge Indiana Farmer’s annual marketing budget, she said the Coliseum naming rights deal is “the largest single marketing or advertising initiative for the company.”

The Coliseum re-opened in April after it was closed for 22 months for a massive renovation, which included an overhaul of the 8,200-seat main arena, concourses, locker rooms and concession areas.

To many, the fairgrounds facility is best-known as Pepsi Coliseum. The soft-drink company acquired the naming rights for the Indiana State Fairgrounds Coliseum in 1992 and kept them until 2012, not long before the renovation was launched. Pepsi was the first and only company to put its name on the facility until the Indiana Farmers deal was announced.

Pepsi was paying $170,000 per year for the naming rights when the contract ended. The fair commission sought to renew the deal at $500,000 per year, an amount on par with similar-sized arenas in other markets, but Pepsi declined.

Indiana Farmers, which exclusively serves Indiana residents, had no such hesitancy about paying what amounts to $600,000 annually for the naming rights deal.

Hallett said he wasn’t surprised at the price the deal fetched.

“Lots of people don’t realize how much traffic this facility will draw,” Hallett said. “Around 1.4 million per year will come through this facility, and that made this deal appealing.”