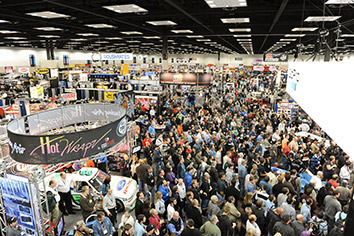 The massive Performance Racing Industry Show opens today at the Indiana Convention Center, and by all appearances it will remain here for awhile.

This year’s three-day racing industry expo wraps up Saturday, but the event’s organizers and Visit Indy officials are negotiating to keep the show here through 2021, they say.

The current deal has the show here through 2019, and PRI officials say they have no plans to go anywhere. That’s music to the ears of local hospitality officials, who estimate the show's local economic impact at $45.6 million.

Three years ago, a long-term deal to keep the show here would have been almost unimaginable.

After a seven-year run in Indianapolis, the PRI Show raced out of town in 2004 for a bigger convention center and warmer temperatures in Orlando, Florida. The show returned to Indianapolis in 2013 after extensive negotiations to get it back.

The way was paved for the PRI Show to return to Indianapolis when California-based not-for-profit Specialty Equipment Market Association acquired PRI early last year. SEMA officials—who also acquired a smaller competing motorsports show in Indianapolis—were strong proponents of moving the show back to Indianapolis due to its central location, racing heritage and $275 million convention center expansion which opened in late 2011.

The PRI Show has seen double-digit growth in attendance and exhibitors in the two years since it moved from Orlando, show organizers said.

This year’s show is expected to draw about 45,000 attendees and 1,100 exhibitors. Nearly 20,000 hotel room nights have been reserved for the event—up about 1,500 from last year’s PRI event in Indianapolis.

The PRI Show is the nation’s largest for the hard-core motorsports industry. The show features cars, engines, haulers and almost every accessory a race driver, team or motorsports company would ever need.

It’s the third-largest convention or corporate meeting Indianapolis will host this year, behind only the National Rifle Association annual meeting and GenCon, a massive show for gamers.

To accommodate growth this year, some of the trailers and haulers on exhibit will be moved out of the convention center and instead be staged along Maryland and Georgia streets.

“We’re pretty much packed to the walls and we’ve sold out our hotel block downtown, at the airport and all the way out to Plainfield,” Kilroy said. “But we’re in good shape here and we’re very pleased with the set-up.”

But as important as the show’s immediate impact is the fact that it still has room to grow here if needed, Kilroy said.

“PRI’s growth is a perfect example of why having Lucas Oil Stadium connected into the Indiana Convention Center is so critical,” Gahl told IBJ. “Starting in 2015, PRI is slated to move into the stadium as part of their growth pattern, with attendees moving seamlessly via the enclosed skywalks and connectors.”

Some of the space in the entry ways, hallways and possibly smaller meeting rooms also could be used as exhibit space if necessary, Kilroy said.

Attendees of the show have largely supported the move back to Indianapolis.

“Orlando was built for Disney World,” said Forrest Lucas, owner of California-based Lucas Oil Co., whose company has the naming rights to Lucas Oil Stadium and has a strong Indiana presence. “Indianapolis was built for the Indianapolis 500. It’s a working city, and it’s set up a lot better for a convention.”