Home » Reservoir or riverside trail system: Which is best for Madison County? 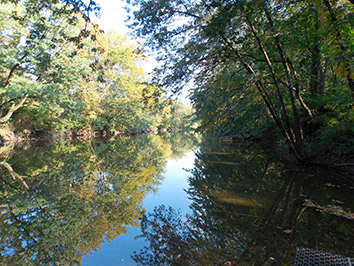 It’s been more than four decades since central Indiana built a reservoir, and the federal agency with authority over multiple states has approved them sparingly in the last 20 years.

Yet economic development officials in Madison County are advancing a plan to dam the White River in Anderson and create a seven-mile lake.

As the Mounds Lake proposal gathers steam, environmental groups are pushing the idea of a riverside trail as an alternative with equal promise for economic development but less expense and environmental destruction.

Experts say neither idea is a sure bet for Anderson, which struggles to fill the gap left by automotive manufacturing.

“It’s kind of the silver bullet school of economic development. ‘We’re going to do this one big project, and that’ll turn things around,’” said Bill Taft, executive director of the Local Initiatives Support Corp. in Indianapolis. “You have to work on education and workforce, amenities and having land ready.”

Rob Sparks, executive director of the Corporation for Economic Development of Madison County, conceived of the reservoir project in 2010 as an economic-development tool.

“We’re building a foundation for the next generation to jump off of,” Sparks said.

But the group isn’t making any projections about new jobs or property values.

The focus of a state-funded feasibility study due out in the coming weeks is on creating a regional water supply and how selling the drinking water could finance the lake’s construction, estimated to cost $400 million, Sparks said.

The reservoir faces many federal regulatory hurdles, but it could soon have a local government sponsor in the form of the Mounds Lake Commission. Sparks said the affected local governments signed off on resolutions last year supporting the feasibility study. Once that’s complete, he will ask the affected county and municipal entities to form the commission, which would have the authority to fund environmental-impact studies and seek a permit from the U.S. Army Corps of Engineers.

The Louisville Army Corps district that covers Indiana has authorized only one large lake in the past 20 years, spokeswoman Carol Labashosky said.

The Kentucky Department of Fish and Wildlife Resources received the OK in 1996 to build Cedar Creek Lake in Lincoln County.

The Army Corps turned down three other big lake projects in Marion, Illinois, and Jackson and Scott counties, Kentucky, because there were “practicable alternatives that were less damaging to the aquatic environment,” Labashosky said.

The state of Georgia has funded the planning of several new reservoirs. Georgia is also suing the Army Corps over the future of a major drinking-water source for metropolitan Atlanta, Lake Allatoona. Authorities in California and Texas want new reservoirs, too.

Likewise, Mounds Lake proponents would have to convince federal officials that the project is needed for water supply, which is increasingly a topic of discussion among central Indiana suburbs.

The Hoosier Environmental Council is promoting the Mounds Greenway, which would create conservation areas and a bike path connecting Anderson and Muncie.

Hoosier Environmental Policy Director Tim Maloney can point to more than a dozen case studies of communities seeing economic benefits from trails, some of which also are along streams.

“We certainly know from all these case studies around the country, these greenways and waterways have positive economic benefit, and they do that by protecting [natural resources],” Maloney said.

HEC estimates the Mounds Greenway would cost $15 million to $40 million.

Trails are certainly in vogue.

Carmel rail-trail advocate Ron Carter speaks to a lot of volunteer groups that hope a bike trail will draw visitors and new residents to their towns.

If they’re contemplating a short trail that passes nothing more than a school and a convenience store, he tells them to forget about economic benefit. “If you are going to build a trail that actually goes someplace, you have a great chance of helping your community.”

One point in favor of the Mounds Greenway idea, Carter said, is that it would connect to the Cardinal Greenway, which offers a continuous path from north of Muncie to Richmond. The Cardinal is an interesting trail, Carter said, and it might one day connect to the National Road Heritage Trail, which is planned from Richmond to Terre Haute.

While the Mounds Greenway wouldn’t face the hurdle of an Army Corps of Engineers permit, it would require many small steps and a contingent of volunteers to make it a reality, Carter said. No land or right-of-way has been purchased, nor has the state, a private conservancy group or other not-for-profit taken up the cause.

“I’d rather see something more concrete moved along more rapidly and finished,” said Carter, who has worked on the B&O Trail that’s under way through west-central Indiana. It would connect Indianapolis to Montezuma in covered-bridge country.

“We have some very finite resources in this state for trails development,” he said.

Sparks declined to outline a vision for Madison County’s lakefront, but it’s easy to see how that would change the course of Anderson’s future.

The dam would be built southeast of downtown, and the river, which cuts a deep ravine in that part of the city, would flood a residential, commercial and industrial area, including Mounds Mall.

State Road 9, also known as Scatterfield Road, could take visitors from Interstate 69, past Hoosier Park racetrack and casino, and over a lake.

Farther upstream, the reservoir would flood part of Mounds State Park and lap up near Anderson Municipal Airport before extending to the small communities of Chesterfield and Daleville.

The impact of the reservoir would be so great, Sparks said, each affected community would have to step back and rethink its long-term plans.

“The private sector will take it from there,” he said.•