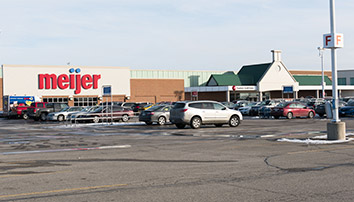 Big-box retailers could see their Indiana property-tax bills slashed in half because of a recent court decision that favored Meijer over Marion County.

The Indiana Board of Tax Review ruled in December that the East 96th Street Meijer store—one of the most successful in the state—should have been assessed in 2012 at the equivalent of $30 per square foot, not the $83 per square foot assigned by Marion County.

The decision, which covered nine years from 2002 to 2012, means Marion County could be on the hook for a $2.4 million refund to Meijer. Other county assessors are under no legal obligation to abide by the ruling, but the closely watched case dealt with a fundamental issue in Meijer and other big-box chains’ appeals: Is the value of a store tied to the sales that happen inside, or is it limited to the big, boxy building itself?

Assessors value retail real estate based on the current condition of the business, but big-box chains are pushing to have their buildings compared to others that have been vacated and sold. Appraisers across the country refer to the big-box chains’ approach as the “dark store theory.”

In the Meijer case, the Michigan-based company’s appraiser compared the store at 8375 E. 96th St., near Fishers, to a former Lowe’s in Anderson and shuttered Wal-Mart stores in Lafayette, Clarksville and Bloomington.

“Sure, the fully functional store’s worth more than the empty store, but the additional worth is in the business being conducted there. It’s not from the real estate,” said Stephen Paul, a partner at Faegre Baker Daniels who represented Meijer at the state review board, and who also represents Target, Home Depot and Lowe’s.

Yet assessors typically consider a business’s income when assigning value to commercial and industrial property.

If higher courts agree with the review board, “then every large manufacturing facility will be valued as a flea market,” said Mark GiaQuinta of Haller & Colvin LLP in Fort Wayne, which represents the Allen County Assessor’s Office.

Paul thinks Indiana law favors the big-box chain’s point of view because it defines tax value as “market value-in-use,” rather than highest and best use.

Indiana’s law was created to protect farmers from skyrocketing property values as commercial property encroaches on agricultural land, Paul said. That means that if a farm is operating next to a shopping mall, it still will be valued as a farm.

While that standard seems to call for valuing a retail store in its current condition, the review board said current use should be defined in a broad sense. In past cases, the board noted, the Indiana Tax Court has found no difference between a building that’s used by a Wal-Mart or Lowe’s and one that’s used by a retailer with a lower credit rating, such as Hobby Lobby or Big Lots.

Terry McAbee, director of commercial and industrial assessments for Hamilton County, said he’s seen other retail businesses, such as banks and restaurants, make similar arguments. Companies are even going so far as to use vacant buildings as comparable values on new construction.

“Their logic is, a brand-new building is automatically obsolete as soon as they build it,” McAbee said.

Most appraisers don’t follow that logic, McAbee said. “If they went in to refinance a loan, I really doubt they’re going to use the dark-box theory to value that property.”

Big-box retail represents billions of dollars in assessed value around the state, GiaQuinta said. He hopes counties can pool their resources and take the Marion County case—or a similar case that the review board decided in favor of Kohl’s in Howard County—to the Indiana Supreme Court.

“The impact is serious,” GiaQuinta said. “There should be very little delay in getting this matter resolved once and for all.”

Meijer lists 33 stores in Indiana, but it’s not pursuing property-tax appeals for all of them, Paul said. Where assessments are in dispute, he said, he hopes to leverage the Marion County decision in settlement talks.

“We thought Marion County would be a good county to take a test case,” Paul said. “We picked a relatively successful store. Whatever the value is there would be the upper limit of value across the state.”

Hamilton County Assessor Robin Ward said she’s not inclined to settle with Meijer at the value granted in Marion County, which is about half the value her office assigned to Meijer stores in Carmel and Noblesville.

The Meijer stores in Carmel and Noblesville are valued at an average of $75 per square foot.

The commercial property-tax rate in Indiana is capped at 3 percent, so the reduction in value translates to annual tax-bill savings in the six figures. In 2014, Marion County valued the 96th Street Meijer at $21.6 million, which would mean a $651,000 tax bill.

Meijer’s tax bill would be reduced to $216,000 if the review board’s decision is carried forward.

Marion County Assessor Joseph O’Connor said he hasn’t decided yet whether to appeal to the Indiana Tax Court.

Marion County has not seen many appeals from big-box retail, but he knew the Meijer case was on the horizon because the company pursued the same strategy in Michigan. “I think they brought that success down to Indiana,” he said.•