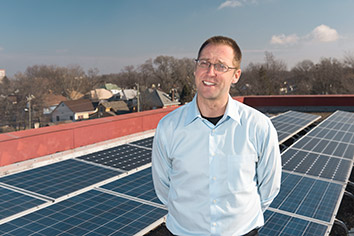 In the estimation of electric utilities, rooftop-solar users like Joe Bowling are freeloaders.

They receive credits for producing energy beyond their own needs, and they still have access to the grid whenever they need it. The problem, utilities argue, is that the cost of maintaining the grid doesn’t go down; it shifts to the rest of the customer base.

That’s why investor-owned utilities are lobbying for a bill authored by House Utilities and Energy Committee Chairman Eric Koch that would allow them to change the economics of generating energy on-site and selling back to the grid, which is known as net metering.

Currently, utilities like Indianapolis Power & Light and Duke Energy have to give net-metering customers credit at the retail price of electricity. If a customer pays 10 cents per kilowatt-hour, he will be credited at that rate for any excess. Koch’s bill, House Bill 1320, would allow the utilities to pay lower rates and to charge additional fees for connecting solar or wind systems to the grid.

“For sure, they provide a real service in maintaining the grid,” Bowling said of the utilities. “Whatever that true cost is, we ought to pay it. No one here is trying to put our local utilities out of business.”

That question about the true cost of maintaining the grid, and whether solar, wind and other forms of “distributed generation” raise or lower it, is a thorny one. It’s at the heart of a national debate between utilities and solar installers and environmental interests, and thanks to Koch’s bill, Indiana is the new battleground.

Advocates of net metering say it’s no coincidence utility companies are lobbying to change their fee structures as solar-panel prices are plummeting. They say utilities play up the fixed costs of the grid without accounting for the money they save because of solar users who reduce demand at peak times, like hot summer days.

Bowling’s home solar would be grandfathered under HB 1320, but the bill could make future projects less attractive. Englewood Community Development Corp., where Bowling is executive director, is planning to build affordable apartments for senior citizens and hopes to offer solar-driven net metering to each unit.

The fact that utilities have already labeled net-metering customers as cost-shifters is worrisome, Bowling said. He likens their argument to Wal-Mart’s complaining about backyard gardeners who also shop at grocery stores, and then asking for a law that would require them to sell their produce to Wal-Mart at wholesale prices.

“That’s unjust. That’s monstrous. That’s evil. We ought not stand for it,” Bowling said. “We would not stand for it if it were a food issue. Because energy stuff is so mysterious and makes people’s eyes glaze over, you can get away with just about anything.”

Net-metering advocates say Koch’s bill would gut the program in Indiana. There were only 523 participants statewide in 2013, but the program has grown quickly. More than 300 net-metering customers have been added since 2011.

Koch, a Republican from Bedford, said his goal is to promote distributed generation, but to do so with fair ground rules, before rooftop solar becomes widespread in Indiana. 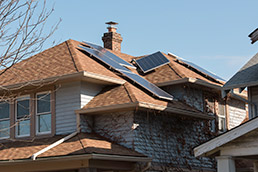 If utilities are allowed to credit generated solar energy at wholesale—not retail—rates, the time it takes Joe Bowling to recoup the money he spent on his home solar system could double. (IBJ photo/Eric Learned)

“There’s a narrative out there that this is the utilities versus the little guy,” Koch said. That’s not the case, he said.

“The utilities can’t do anything unilaterally,” Koch said. The Indiana Utility Regulatory Commission would have to approve each utility’s net-metering rates and fees. “It’s a mini trial,” he said. “We have a very good commission and a very good process.”

Koch acknowledged that utilities would probably reduce the value of their credits. Rural electric co-operatives, which aren’t regulated by the IURC, already offer credits at less-than-retail rates, he said, yet they still have viable programs.

Mark Maassel, president of the Indiana Energy Association, which represents investor-owned gas and electric utilities, said Indiana’s net-metering rule isn’t fair because it requires utilities to pay three times as much for energy as they would on the open market.

Utilities don’t want to eliminate distributed generation, Maassel said. In fact, he said they might want to get into the business.

Other provisions of Koch’s bill make it legal to lease solar systems in Indiana and create disclosure rules and other consumer protections. Leasing could make solar even more affordable, as in Arizona and other states, Maassel said.

In a twist on typical political alliances, utilities are backed by at least one environmental group and one minority coalition as they push to change net-metering rules.

Koch pointed to a joint statement issued a year ago by the Edison Electric Institute and the Natural Resources Defense Council, which asks state regulators to rethink the way utilities recover their costs, in light of new technology that allows customers to sell energy back to the grid.

(The NRDC says Koch is taking their statement out of context. A spokeswoman said in an email that the organization opposes "changes that reduce rewards for saving energy or adding renewable generation, which are prominent elements of Rep. Koch's bill.")

The National Policy Alliance, a group of African-American politicians, issued a resolution saying net metering shifts the burden to low-income customers, a disproportionate number of whom are black.

Maassel pointed to a detailed study in California that found net-metering customers, which number around 150,000 in the Golden State, pay for 88 percent of their fixed costs. Most of them had consumed large amounts of energy before they went to net metering, and they were wealthier than typical customers. The median household income among net-metering customers was $91,210, compared with $63,821 across the territories of three investor-owned utilities.

How net metering affects a system depends much on specific electricity rates. In California, customers pay higher rates as they use more and more electricity, but the opposite is true for IPL and Duke customers in Indiana, said Laura Ann Arnold, president of the Indiana Distributed Energy Alliance, which includes solar and wind installers, photovoltaic developers and electrical engineers.

Yet Maassel doesn’t hesitate to conclude that net metering in Indiana shifts a large burden to traditional customers.

“If you installed a windmill in your back yard … all of the customers around you would have to pay an increased amount of money because of your system,” he said. “They could easily pay twice what you would pay in terms of the wire coming out of your house.”

After the Englewood CDC installed a solar array at its offices on Rural Street, Bowling began to look for an opportunity to add solar to his home nearby.

He put himself on a waiting list for IPL’s $1,575 rebate, which expired at the end of 2014, and just before the end of the year, he and two neighbors were notified of their eligibility.

Because of the rebate, Bowling hopes to recover the cost of his $4,500 system in about 15 years. If he qualifies for a federal income-tax credit as well, the payback period could be as short as seven years.

Bowling’s system is so small, he thinks he’ll generate only a little excess energy in the summer months. Even without selling much back to the grid, the current net-metering system made solar a viable investment.

Electricity prices are the key factor. IPL customers pay about 8 cents per kilowatt-hour for the first 1,000 kilowatt-hours they use each month. As long as the utility credits him at that retail rate, Bowling’s system saves him $201.60 a year.•

This story has been updated to include a quote from the Natural Resources Defense Council.