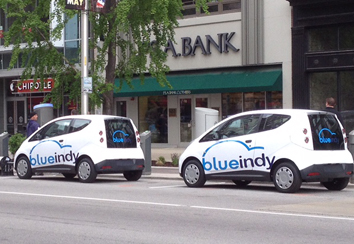 The Indiana Utility Regulatory Commission on Wednesday shot down the bulk of a plan by Indianapolis Power & Light to charge ratepayers $16 million for costs involving a proposed all-electric car-sharing service called BlueIndy.

The IURC denied a $12.3 million cost-recovery request by the utility to pay for installation of charging stations and kiosks for the project. It did grant permission for the utility to bill customers for $3 million in distribution system upgrades as proposed in a settlement agreement made by IPL, the city of Indianapolis and the Indiana Office of Utility Consumer Counselor.

“While the commission applauds the vision shown by the city of Indianapolis, BlueIndy, and IPL regarding their innovative electric car-sharing program, we ultimately determined that there was insufficient evidence to justify the use of ratepayer funds to install infrastructure owned by a private company,” IURC Chairwoman Carol Stephan said in a written statement. “As such, we encourage the parties to continue to work together to provide this service to our community’s residents and visitors.”

BlueIndy LLC Director of Business Development Bob Briggs said Wednesday afternoon that officials involved in the ride-sharing service were still digesting the news and would have no immediate comment about the decision and the future of the BlueIndy.

BlueIndy is a subsidiary of France-based Bollore Group, which operates a car-sharing service in Paris with about 70,000 subscribers. Bollore plans to open additional services in London and Indianapolis this year. Los Angeles and Singapore are also targeted for future years.

The company hopes to eventually have 250 car-sharing sites throughout Indianapolis with 15,000 to 20,000 regular users. Bollore said the local service would require a $35 million investment upfront and about $15 million in annual operating costs.

Charging stations have been set up downtown and at Castleton Square, where demonstration cars can be tested by interested customers.

The Indianapolis service was expected to open in May 2014, but the plan was delayed over disagreements involving the company's request for a rate hike in local electricity rates to help pay for some of the costs.

Consumer groups balked at IPL’s initial request for a rate hike that would cost the average residence about 44 cents per month over five years. The monthly charge was lowered to 28 cents over 10 years in a settlement negotiated by IPL, the city and the consumer counselor.

The IURC ruled that Indiana law allows a utility to request recovery for the cost of extending utility service to new customers if it’s shown to be in the public interest. That’s why it was able to approve $3 million of the $16 million request.

However, IURC said, IPL could not charge customers for the vehicle charging stations because they would be owned by Bollore.

“The commission found that the [plan] is in the public interest only with regard to the distribution system upgrades costs, often referred to as the utility line extension costs,” the IURC said.

The IURC said IPL has 20 days to accept or appeal the commission’s decision.