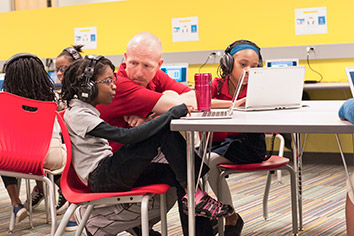 After seeing a 2014 law fuel unprecedented collaborations between Indianapolis Public Schools and such charter schools as Phalen Leadership Academies, the Indiana General Assembly decided to extend the same opportunity to school districts statewide.

Lawmakers passed two bills on April 15, House Bill 1009 and Senate Bill 566, that allow all Indiana school districts to form “innovation network schools”—which have the same freedoms as charter schools but still count as part of a district for purposes of funding and the district’s A-F grades.

The new authority isn’t likely to get much use right away, according to various school leaders, but it could be a way school districts avoid having one of their poor-performing schools taken over by the State Board of Education. 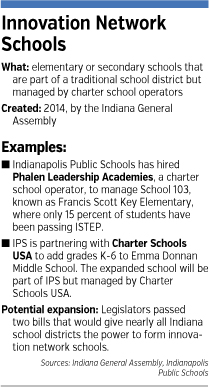 IPS has developed plans that would hire Phalen to apply the innovation network schools concept at Francis Scott Key Elementary, one of IPS’ worst-performing schools.

IPS has also struck a deal with Charter Schools USA to establish a feeder school for Emma Donnan Middle School, one of the schools already taken out of IPS’ control by the state. That plan still requires approval from the IPS board.

If other districts are faced with losing control of one of their schools, they, too, might turn to “innovation network schools” as a solution, said Jeff Butts, superintendent of Wayne Township schools on the west side of Indianapolis. But they would strongly prefer to retain full control, rather than hire a charter school.

“I believe that if a locally elected [school] board and the staff of a district can use the resources and opportunities available to increase student achievement and school performance, they will do so without releasing oversight and authority over a school in their district,” Butts wrote in an email. 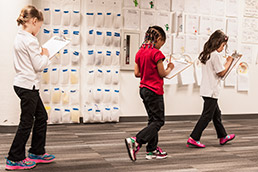 Students do an exercise on clipboards while walking the halls at Phalen Leadership Academies at 2323 N. Illinois St. (IBJ photo/Eric Learned)

But the law that created innovation network schools, known as Public Law 1321, is potentially more attractive.

Another difference: Innovation network schools must be neighborhood schools—admitting any student in the geographic region around a school’s building—whereas charter schools recruit students from across the city.

It hasn’t been without controversy, particularly among teachers. That’s because teachers at innovation network schools are not part of a school district’s teacher union contract—unless the teachers at that school vote separately to join it.

“I just think it’s really sad that they’re not looking at ways to invite teachers to the table. It just creates issues and tensions that don’t need to be there,” said Teresa Meredith, president of the Indiana State Teachers Association.

The IPS board agreed in March to let Phalen take over the Francis Scott Key Elementary, also known as School 103. The K-6 school had just 15 percent of its students pass ISTEP during the last school year, giving it an F grade from the state.

This year, 95 percent of the school’s 341 students are minorities and 84 percent qualify for free or reduced-price lunches.

Phalen’s school, which opened in 2013, has a similar student body: 96 percent of its 300 students are minorities and 88 percent qualify for free or reduced-price lunches. It includes grades K-3, with plans to add an additional grade each year until it reaches eighth grade.

Phalen will bring its unusual approach to the IPS school. Phalen students attend from 7:30 a.m. until 4 p.m.—about 90 minutes longer than at most public schools. 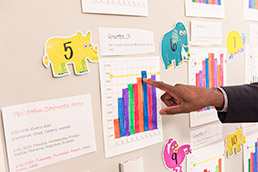 All of Phalen’s students spend about 90 minutes per day working individually on game-based computer programs that teach math and language skills.

Phalen’s teachers have weekly “data chats” with their students—even with the kindergartners—about what percentage of their classmates are succeeding on key standards in their curriculum.

The results are graphed in colored charts on the wall at the entrance to the kindergarten classrooms, showing how close the classes are getting to an 80-percent proficiency rate in each category.

Phalen includes two adults in every classroom—one certified teacher and one assistant. That allows the classes to split frequently into three groups of eight—two groups with an adult, and the other group on computers.

“We have to write essays a lot,” Baker said.

Phalen’s model is expensive. It spends $14,000 per student per year, about 25 percent higher than the state average for public schools.

But Phalen has been getting results. For example, 93 percent of its third-graders passed the state’s I-Read test this year. At Francis Scott Key last year, the pass rate was 50 percent.

Earl Martin Phalen, the school’s founder, said a radically different approach is needed to change the trajectory of students at an “underperforming” school like Francis Scott Key.

“The notion that there’s got to be greater flexibility to try to turn around schools is a great thing,” he said.

If successes with high-poverty students can be replicated at IPS’ schools, more districts likely will use the innovation network schools concept, said Jon Hage, CEO of Florida-based Charter Schools USA, which has agreed to partner with IPS to create a K-6 school inside the Emma Donnan building. Charter Schools already operates the middle school on contract for the state.•