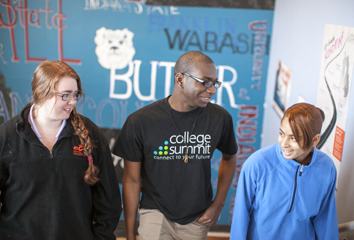 Trenee Lambert didn’t think she was destined for college. Instead, the Manual High School student was preparing for a life of working in retail or the fast food industry.

“That was as far as I thought I was going to go,” Lambert said. “My parents didn’t have an education. They were bare minimum getting by. I thought that was an OK lifestyle.”

But the summer program that helped her, and other students like her, navigate the way to college is pulling out of Indianapolis. College Summit, a Washington, D.C.-based organization that helped more than 10,000 high school students make it to college who otherwise might not have gone, is suspending its operations in the state.

“I kid you not, I cried,” Lambert said of her reaction when she heard the news. “I started to think about all the kids we could have impacted this summer. They’re losing out on relationships, skills, mentors. It’s a lot.”

A combination of fundraising woes, expansion setbacks and leadership changes at the program’s various schools caused the organization to make the decision to pull back, said Allen Goldberg, College Summit’s chief marketing officer.

“What happened was a confluence of events more than anything else,” Goldberg said. “There are a lot of changes at the schools that we currently serve and we weren’t adding the number of schools that we needed for our operational model. It just didn’t make sense for us to be there next year.”

Susan Sparks, a newly retired teacher who led College Summit classes at George Washington, said it opened up new doors for children. College Summit was aimed at promising students who would be the first in their families to go to college. The program taught them how to seek financial aid, how to apply and even how to reflect on their lives to find material for compelling college essays.

“I think it’s a terrible loss for all those kids,” Sparks said. “I think College Summit is a tool that our kids need. They don’t have parents at home who have attended college.”

Just under 61 percent of students graduate in four years at the west-side high school, nearly 30 percentage points below the state average.

Mind Trust CEO David Harris, whose organization brought the program to Indianapolis in 2007 by creating a pilot at Manual High School, said its fundraising troubles represent a new challenge in Indianapolis.

“The education reform space here has gotten very crowded,” Harris said. “We’re a little bit a victim of our own success.”

Goldberg said the organization hopes to resume operations again in Indiana one day. The state still needs better support to get vulnerable children to college.

“We’re looking at it as more of a temporary suspension of operations,” Goldberg said. “We are definitely winding down with this school year but our desire is to come back as soon as possible.”

To make up the deficit in the meantime, Harris said schools need to “build their own capacity” and get serious about providing low-income students a path to college.

College Summit changed everything for Lambert, she said.

She never thought she was the kind of person who could go to college. She had been working much of her life, helping care for younger siblings after her father died when she was in elementary school and then in fast food during high school.

Even though teachers thought she was bright, Lambert’s goals were limited. She hoped simply to be a fast food manager some day.

“I realized it wasn’t OK to think that’s all that was out there,” she said.

But College Summit helped Lambert realized she not only could go to college, but that her life story was far from ordinary. In fact, colleges wanted students like her.

“It should be mandatory for every high school student,” said Lambert, who worked in College Summit summer camps.

She eventually graduated from Indiana University with an education degree and became a teacher, now at Indianapolis Public School 19.

In 2011, the Indianapolis Star worte about her transformation after College Summit in a profile of the program.

Lambert pulls out the article to re-read it from time to time.

“I read it sometimes when I think about it how far I’ve come,” she said.