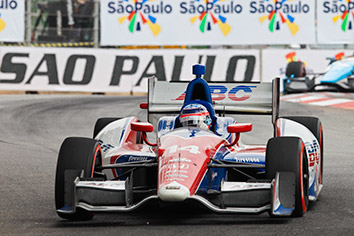 The footprint of the IndyCar Series will expand to Boston in 2016 with the addition of a Labor Day weekend event, officials announced Thursday.

The Grand Prix of Boston will feature an 11-turn, 2.25-mile temporary street course winding around the Boston Convention & Exhibition Center in the Seaport District. The event will mark the first time an IndyCar race has been run in Boston.

IndyCar's agreement for the race extends through 2020.

“The level of enthusiasm we have received from the Boston community has been phenomenal, and we look forward to showcasing the Verizon IndyCar Series on Labor Day weekend in 2016,” said Mark Miles, CEO of Hulman & Co., the parent of the IndyCar Series and Indianapolis Motor Speedway. "Establishing IndyCar racing in the Northeast is an integral part of our strategy for growing our national fan base.”

“This is an exciting time in Boston, and as we explore new ways to grow and attract visitors here, we’re engaging in strong dialogue with organizations like the Grand Prix of Boston,” said Boston Mayor Martin Walsh in a statement. “This event has great potential to bring an influx of tourism and support our local businesses during what is traditionally a challenging holiday weekend for hospitality. I’m excited to begin this process and hear from our residents and business owners as we move forward.”

Mayor Walsh's office contacted IndyCar last June, expressing interest in hosting a race as part of plans to attract high-profile events to the city, series officials said. IndyCar had been looking to slot more races in metro areas—especially on the East Coast.

Derrick Walker, IndyCar Series president of competition and operations, said there are “at least six passing spots” on the circuit. A unique feature, Walker said, will be parallel pit lanes.