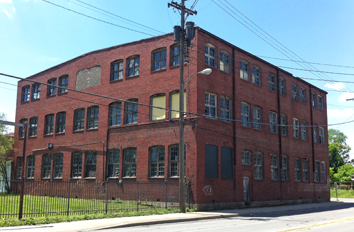 King Park Development Corp. is pursuing another developer to rehab a century-old vacant building on East 16th Street after a Noblesville firm pulled out of a deal to convert part of it into a hub for food-and-beverage startups.

Slane Capital said last June that it would invest $3 million to develop the project for Better Retail, which planned to move its headquarters from Hamilton County while providing space for culinary startups.

Brothers Gerry and Geff Hays operate both Slane Capital, a startup investment firm, and Better Retail, which invents and produces products and technologies for grocery retailers.

Slane Capital was set to receive a $1.3 million grant from the U.S. Department of Housing and Urban Development, administered through the city, to help with redevelopment costs.

But the environmental issues made it difficult for Slane to find additional funding, especially since Slane has no track record as a developer, Hays said.

“The city and King Park need to move the grant money or there are repercussions from HUD,” he said. “It just wasn’t’ going to move fast enough for what the city needed.”

Work on the three-story, 30,000-square-foot building and a smaller accompanying structure was expected to start in August, with completion expected this year.

King Park stepped in to buy the building in January from a local group for $305,000 and now is seeking proposals to redevelop the property, said Steven Meyer, executive director of the community development corporation.

“Because of the deadline put on us by the grant, we notified Slane that we would have to find another partner to finish the project,” Meyer said.

The CDC sent a request for information June 1 to developers that have expressed previous interest in the building and to those that are experienced in historic preservation.

“It’s a key part of the redevelopment of 16th Street,” Meyer said. “In order to save the building we needed to act as quickly as possible.”

King Park is using part of the grant money to replace the building’s roof and windows, and to complete masonry and tuck-pointing work. The repairs should be finished by Sept. 1.

King Park also will use $250,000 of the grant money to remove solvents from the soil and groundwater. The group will own the property at least through completion of the remediation, which is expected to take about two years, Meyer said.

Slane Capital isn’t the first developer to express interest in the building, Meyer said. But the environmental issues have complicated a sale.

Known as Tinker Flats, the 1915 building just east of the Monon Trail originally was home to a factory making bank furniture. In the 1950s, an addition was built on the south end of the property to accommodate a recycling center.

That’s where the food and beverage hub would have been. Hays of Slane Capital envisioned tenant stalls in the space, which is about 8,000 square feet. The hub would have been modeled after a similar concept in Denver called The Source. The artisan food market occupies a former 1880s foundry in the city’s River North District.

Better Retail planned to take the top two floors of the building and use the ground level for event space or possibly lease it to another tenant.

Tinker Flats is one of several properties in the East 16th Street area poised for redevelopment.

The former Gleaners Food Bank of Indiana Inc. building across from Tinker Flats is on the market.

A few blocks to the west, Lincoln, Nebraska-based real estate firm U.S. Property Management is preparing to invest up to $8 million to convert a vacant building into a mix of apartments and retail uses.

The company owns the nearly century-old building at the southeast corner of East 16th and Bellefontaine streets that housed the Omar Baking Co. from 1927 to 1966. It has received approval to rezone the 1.7-acre property and envisions 49 apartments and commercial space in the three-story structure.

To the north, locally based Reveal Properties LLC and Indreno Development Group LLC have teamed to buy four vacant structures on each corner of East 17th and Bellefontaine streets in hopes of adding a mix of office, retail and residential space.