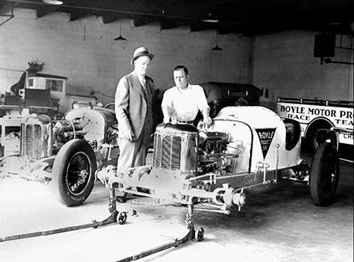 The Marion County Commissioners on Friday voted to hand over the keys to the historic Boyle Racing garage to Indiana Landmarks at no cost, contingent upon the organization’s ability to refurbishing the structure within two years.

“But it’s a place where racing history was made, and our Indiana Automotive affinity group is 100 percent behind this rescue,” he said in a written statement.

Indiana Automotive commissioned an architect’s rendering that depicts what the building could look like after it’s renovated. A new group, Boyle Racing Project LLC, is seeking not-for-profit status and expects to take over the Boyle project from Indiana Landmarks.

The group estimates that it will take at least $300,000 to restore the building.

Mike Boyle, a powerful Chicago labor leader for more than 50 years, fielded several winning cars in the Indianapolis 500 from the 1920s through the 1940s. He employed famed mechanic Cotton Henning and hired some of the best drivers of the period, including Cliff Woodbury, Ralph Hepburn, Billy Arnold and “Wild Bill” Cummings.

Wilbur Shaw, perhaps the most famous of Boyle’s drivers, piloted a Boyle Special Maserati to win the race in 1939 and 1940.

Indiana Landmarks and Indiana Automotive saved the building by appealing to have it pulled from the city’s demolition list. The county took possession of the building for unpaid taxes, and the city had planned to clear the site.

“We jumped to the challenge because the rear section of the garage has caved in and we didn’t think the place could go through another winter without stabilization,” said Andy Wolf, chairman of Indiana Automotive and president of Boyle Racing, in prepared remarks.

The group is developing a plan for the building, which may include a combination of commercial and community uses.

Indiana Landmarks said it will attach a protective covenant to the deed, guaranteeing that the building will regain its historic appearance through the restoration and will be maintained in the future.