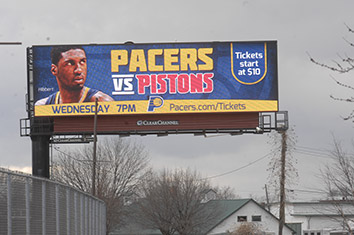 In the meantime, the same court decision has spurred city staff to review the sign ordinance for compliance.

In Reed v. Town of Gilbert, the Supreme Court unanimously ruled that the Arizona town had violated the First Amendment by placing limits on the size of signs announcing church services.

The case, brought by a church and its pastor, concerned an ordinance in Gilbert that placed special restrictions on political and ideological signs, as well as signs that provide directions.

GEFT's lawsuit alleges Indianapolis violates the First Amendment by having different standards for "on premises" and "off premises" signs. The on-premises signs, which advertise solely for the business in the same location as the sign, are allowed to have digital content. Off-premises signs, which advertise for a business or product located or made available elsewhere, are not allowed to have digital content.

"It's simply a content issue," said lawyer A. Richard M. Blaiklock, who is representing GEFT. Because the Indianapolis ordinance imposes more restrictions on one type of content than another, it is unconstitutional, he said.

On the same grounds, the suit objects to special regulations on signs that express noncommercial opinions or points of view, such as political, religious or ideological sentiment related to a public election.

GEFT’s lawsuit concerns three locations in Indianapolis where it either owns or leases billboards.

At two of the properties—4305 W. Morris St. and 5780 E. 25th St., both near Interstate 70—GEFT wants to display digital content on the off-premises billboards and has filed for a zoning variance with the city.

A city planning employee on Sept. 17 informed GEFT that the planning department intended to issue a staff report recommending that one of the city’s board of zoning appeals deny the requests, according to GEFT’s suit. Both requests are set to be heard Nov. 5.

The digital ban on both signs is costing GEFT a total of $120,000 per month in potential revenue, the suit claims.

At the third location mentioned in the suit, 700 W. Morris St., the city ordinance requires that the sign only display messages pertaining to the business on the premises—Republic National Distributing Co. of Indiana.

The ban on displaying off-premises advertising and noncommercial opinion signs at the site is costing GEFT up to $15,000 per month in potential revenue, according to the suit.

City officials did not respond to a request from IBJ for comment on the suit. However, city staffers are examining the sign ordinance for conflicts with Reed vs. Town of Gilbert, Tammara Tracy, the city's principal planner, told the Indianapolis Historic Preservation Commission Wednesday evening.

The City-County Council is expected to address the issue Nov. 9.