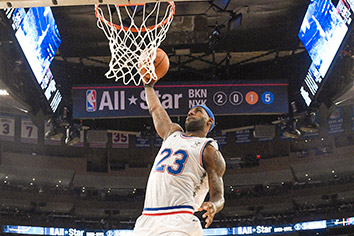 The NBA wants to bring its all-star game to Indianapolis. But it’s not clear local sports officials are ready to make a formal bid to play host.

When NBA Commissioner Adam Silver was here this month for the groundbreaking of the Pacers’ new training center, he heartily endorsed the idea of bringing the all-star weekend to Bankers Life Fieldhouse.

Silver told IBJ the Pacers have not made an official request to host the game. But he said the team and league officials have recently talked informally—and that the idea “has been very well received by me.”

“I know the Simon family would be interested in doing it at some point,” Silver said. “And we’d love to come back here.”

“I’ve seen some of the old footage,” Silver said. “I remember Nancy Reagan was here and it was a big event.”

Since then, there’s been no formal push to bring the game back. When Bankers Life Fieldhouse opened as Conseco Fieldhouse in 1999, city officials said they wanted to use the venue to win the NBA All-Star Game back. The original lease agreement between the city and Pacers for the fieldhouse stated the franchise would use its "best efforts" to lure the game here. But a bid never materialized.

Then in April 2014, when the Capital Improvement Board approved a 10-year, $160 million subsidy package to help the Pacers operate the fieldhouse, Mayor Greg Ballard voiced a desire to host the game.

“The mayor is encouraging us to go after the NBA All-Star Game and we aspire to have it here in the future,” Pacers executive Jim Morris said at the press conference announcing CIB’s financial aid.

Ballard, sitting beside Morris, nodded in agreement. And some city officials at the time wondered aloud why the venue regarded as one of the best—if not the best—NBA arenas, hadn’t hosted the all-star extravaganza.

Now, Ballard is leaving office. And it’s not clear whether Democrat Joe Hogsett, who takes office Jan. 1, is as big an advocate for the event. Meanwhile, Pacers officials have declined to speculate what—if any—year they might target to bring the game to Indianapolis, but they characterized the issue as front-burner.

“We continue to talk to the league,” Pacers President Rick Fuson said. “Bringing that type of global event to the city would be a great thing.”

The earliest Indianapolis could likely host would be 2019. The 2017 game has been awarded to Charlotte, North Carolina, and several cities—including Cleveland and Portland, Oregon—are already bidding for 2018.

Many in the local hospitality industry are high on the possibility.

“It’s the type of event that draws people who are going to eat and drink and spend a considerable amount of money,” said Hyatt Regency Hotel General Manager Joe Pinto.

But there could be hang-ups.

“We would be supportive of attracting a high-profile event like the NBA All-Star Game, which would generate economic impact and marketing exposure,” said Visit Indy Vice President Chris Gahl. “Yet we know there are numerous factors that would have to align to make a bid successful.”

For competitive reasons, Visit Indy officials declined to discuss the matter in detail.

CIB member Milt Thompson, one of the early architects of the city’s drive to become a sports hub, said the event’s mid-February timing could present scheduling conflicts.

“There’s some concerns about displacement of other activities and that the payoff wouldn’t be what other events like the Super Bowl was,” Thompson said. “I’ve heard some say it wouldn’t be worth it to shut down a facility for a week or more for one game on one Sunday afternoon.

“I don’t think it’s an event the city would shun,” he added. “But you’d have to look at the economics.”

The Pacers likely wouldn’t see a large payoff because the NBA controls much of the ticket inventory. Some NBA teams have shelled out six-figure sums to host the game with the expectation of little return for the franchise itself.

The NBA All-Star Game has evolved dramatically since the last time Indianapolis hosted it. The actual game is played Sunday. But before that, a slew of high-profile events are televised.

■ Taco Bell Skills Challenge, a contest of top guards working against the clock to complete a series of passes, free throws, layups and agility drills.

■ A slate of activities, including the Sprint Pregame Concert.

In addition, red-carpet events and parties for celebrities who come to town are hosted by sponsors, and concerts feature big-name entertainers.

About 22 million TV viewers in the United States alone last year watched some part of the weekend, according to New York-based Nielsen Media Research. The actual game, in New York, was watched by 7.2 million Americans, according to Nielsen.

This year’s game, in Toronto—the first outside the United States—will be broadcast to a worldwide audience in 215 countries and territories and in more than 40 languages. The weekend typically draws tens of thousands of fans to the host city. The NBA uses the event to network with sponsors, who consume many of the tickets. But the host team’s season-ticket holders usually get some access.

Based on recent studies of other cities, Cleveland Cavaliers owner Dan Gilbert estimated his city would experience a $100 million economic impact from the weekend if it wins the 2018 bid.

The NBA has also used the event to leverage stadium improvements.

In May, Silver said the Cavaliers’ stadium, Quicken Loans Arena, would need improvements before Cleveland could play host. He declined to say what improvements the arena, which opened in 1994, needed.

The city of Charlotte agreed in its bid to spend $27.5 million on renovating the Hornets’ arena.

The Pacers and the city of Indianapolis would seem to have little to worry about on the venue front. As part of subsidy agreements with the city, a new ribbon board, a scoreboard and other improvements have been made to the 18,165-seat fieldhouse.

“Bankers Life is state-of-the-art in every way,” Silver said. “In fact, it’s a very unique basketball arena—and not just in this league. I’ve been to arenas all over the world and there’s just a special atmosphere in this building.”

He also said Indianapolis has the people and organizations in place to host the event.

In addition to venue renovations, Charlotte officials estimated it will cost $6 million to host the four-day event in 2017.

The Charlotte City Council recently agreed to pay $600,000 for security and sanitation work for the weekend. Officials there have agreed to sell a piece of city-owned land to raise funds and they plan to use another $1.5 million from hospitality taxes and $1.25 million from the Charlotte Regional Visitors Authority. The state of North Carolina also is expected to chip in a high-six- to low-seven-figure sum.

And the Hornets have agreed to contribute $150,000 and help raise $1.5 million in sponsorship funds.•