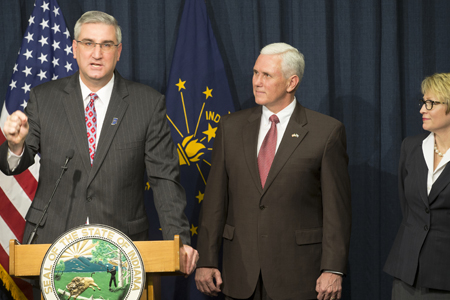 Can Eric Holcomb pull this off?

Political observers say Indiana’s newly minted Republican gubernatorial nominee has an uphill battle ahead in the next 100 or so days if he wants to beat Democrat John Gregg in the Nov. 8 election.

“What he’s faced with right now is fantastic,” said political analyst Brian Howey of Howey Politics Indiana. “He’s got to put a staff together. He’s got to unlock the Pence money. Then you’re looking at a three-month window. …That’s a tall task.”

Holcomb started his wild ride with mere days to choose a running mate after his July 26 appointment to the ballot by the 22-member Indiana Republican Party central committee. Holcomb replaces Gov. Mike Pence, who is now running for vice president. Holcomb’s choice for lieutenant governor won’t be officially named until Aug. 1.

Gregg, meanwhile, is already campaigning with his running mate, having named Rep. Christina Hale of Indianapolis as his partner back in May. And Gregg has been on the airwaves since then and has $5.8 million in the bank.

Holcomb—a longtime Republican operative who was appointed to serve as lieutenant governor in February—has little more than $20,000 in the bank. And his fledgling campaign is weighed down by reports that Pence might not be able to directly transfer his $7.4 million war chest to him under federal election rules.

Holcomb needs the money fast to raise his name ID across the state, something analysts said is most easily done through political advertisements on TV and radio. Howey, who sponsors polls in Indana races, estimated that Holcomb’s name ID stands somewhere near 20 percent statewide, despite running an abandoned U.S. Senate campaign earlier this year that he seemed assured to lose.

Gregg, who narrowly lost to Pence four years ago, has name identification at about 60 percent, Howey said.

That’s not to say Holcomb is doomed—by any stretch. Indiana is a Republican-leaning state. And it’s a presidential election year in which Donald Trump and Mike Pence are expected to win the state easily. Holcomb has that going for him.

“Nobody could say that this makes John Gregg’s life easy,” said political science professor Robert Dion of the University of Evansville. “This is going to be a close and competitive race. And it is going to be an expensive campaign to wage.

“If John Gregg is going to come out on the winning end this time, he is going to have to work hard for it, whoever the candidate is.” 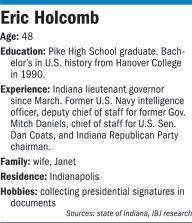 The race is, in some ways, a test of whether Holcomb’s organizational skills, political experience and sheer will can net him a statewide victory.

“I understand this is a veryunprecedented scenario we findourselves in,” said Pete Seat of Hathaway Strategies, who helped run Holcomb’s U.S. Senate campaign. “I would never underestimate Eric and the network he has built in the last decade. Eric will continue doing what he has always done, which is being in perpetual motion.”

Holcomb was up until 2 a.m. the morning after his selection, responding to well-wishers who congratulated him on winning the place on the ballot over U.S. Reps. Susan Brooks and Todd Rokita.

Seat said Holcomb is also bolstered by a network of state legislators and lower-level officials who support his candidacy and have already started making phone calls and knocking on doors.

“There may not be a campaign manager as of today,” Seat said on July 27, “but there’s a grass-roots army.”

Still, observers said the committee’s choice of Holcomb was the most favorable one for Democrats, especially compared to Brooks, who—if elected—would have been the first female governor of the state and could have more easily distanced herself from Pence.

“Eric has only been the lieutenant governor since March, but he can’t run away from the Pence record in a way that Brooks or Rokita could have,” said Andy Downs, director of the Mike Downs Center for Indiana Politics at Indiana University-Purdue University at Fort Wayne. “They could have embraced and rejected the parts of it they wished. The Gregg campaign got really lucky.”

Holcomb “has a deficit in name recognition, and he doesn’t have immediate access to the funds that could help him resolve that,” Downs said. “The Gregg campaign can now spend however many days before Holcomb has resources defining him. You don’t want your opponent to define you.” 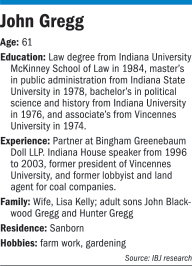 Gregg’s campaign spokesman, Jeff Harris, said he would “let the pundits handicap who was the strongest candidate” among those seeking the GOP ballot spot. But he said Holcomb’s selection means the Gregg campaign doesn’t have to quickly change or retool its message.

Holcomb “doesn’t represent anything different from what they had before,” Harris said. “Our new opponent was obviously the hand-picked successor to Mike Pence. [Our] arguments don’t change because Eric Holcomb has wrapped his arms around the failed economic policies of Mike Pence.”

The University of Evansville’s Dion said that, although all candidates should be judged on their own merits, Holcomb would be unlikely to distance himself from Pence.

“It would be disastrous for him to try to distance himself from Gov. Pence at this point in the campaign after he spent the past few months embracing him and his ideas and his record in office,” he said. “Doing such a thing would be like a rerun on the bungled RFRA ‘fix’ that ended up making people on all sides unhappy.”

Holcomb was asked directly by reporters after his selection announcement July 26 whether he would follow Gov. Mitch Daniels’ approach to governing by declaring a “truce” on social issues. He hedged, saying he would work with the General Assembly on issues across the spectrum.

But Ryan Kitchell, who worked with Holcomb in the Daniels administration and is now executive vice president at Indiana University Health, said Holcomb “brings people together.”

“He’s a unifier,” Kitchell said. “He effectively seeks out different opinions, then brings everyone together to do what’s best for Indiana.”

It’s worth recapping that Holcomb—who has never been elected to office but served as a close adviser to Daniels, Pence and U.S. Sen. Dan Coats—has had one of the biggest Cinderella stories in Indiana politics of late.

He went from running in third in a Republican U.S. Senate primary to being named the state’s Republican gubernatorial nominee in a matter of months—after years influencing Indiana’s policies from behind the scenes.

Kitchell said Holcomb was “at the table for every major decision” the Daniels administration made, including the Major Moves infrastructure projects, creation of the Healthy Indiana Plan, development of the Indiana Economic Development Corp., expanding the Indiana Convention Center and reworking education policy.

“Not just watching,” Kitchell said. “He was in it. Doing, leading.”

The question now is whether he has time to convince the voters.•