Home » Emails heat up lawsuit over sale of Pacers stake 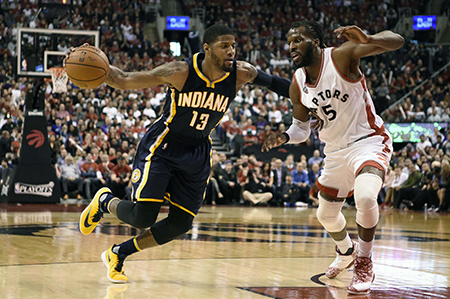 Attorneys for the IRS have gotten their hands on an email that appears to buttress their case that Herb Simon received a sweetheart deal when he acquired his ailing brother Mel’s 50 percent ownership in the Indiana Pacers in early 2009, just a few months before Mel died at age 82.

Whether Mel got full value for his stake matters because, if he didn’t, Herb effectively received a massive gift—which is exactly what the IRS contends. After conducting an audit, the agency valued that gift at $83 million and ordered Mel’s estate and his widow, Bren Simon, to each pay $21.3 million in gift taxes.

Both paid, but Bren did so under protest and filed a suit in March of last year seeking to recoup the money. The suit remains in its early stages but already is bringing to light new details about the sometimes-contentious, behind-the-scenes family deliberations that led to the deal—which was so private the brothers and team never announced it publicly.

Bren’s attorneys say Mel received “full consideration” for his half of the team. They said in a court filing that “Herb and Mel were savvy and experienced businessmen, both skilled in making business deals and interested in striking the best deal for themselves.”

But emails the IRS has amassed during discovery, and deposition excerpts it has filed with the court, suggest the parties took no steps to seek outside validation the terms were fair—despite the apparent complexities of valuing a major sports franchise.

Perhaps most damaging to Bren’s case is an email Indianapolis attorney Robert Salyers—a longtime friend and legal adviser of Herb’s who served as Pacers president in the early 1980s—dashed off to Herb and others in November 2008 regarding NBA approval of the deal.

“I believe that most of the owners that think about it at all will understand that this is a transaction between brothers and probably not a market deal,” Salyers wrote.

Copied on the email was Bruce Jacobson, a now-retired partner at the local CPA firm Katz Sapper & Miller, which for decades has advised the Simons—one of Indiana’s richest families—and helped put together the 2009 deal between Mel and Herb.

Jacobson said in a May 2016 deposition and in an email exchange filed in court that one of the objectives of the deal was to avoid a capital-gains tax hit to Mel, who bought the NBA franchise with his brother in 1983 for $11 million.

In a January 2009 email to Bren Simon’s attorney, Jacobson wrote: “We have been careful to structure the agreement between Mel and Herb not to be a current sale of Mel’s interest. The income tax consequences of a current sale would be terrible.”

Bren does not spell out the terms of the deal in her lawsuit, and the public portions of highly redacted court documents in other legal battles that unfolded after Mel’s death don’t list them, either. At the time the deal was struck, Forbes magazine, in its annual ranking of NBA team values, said the franchise was worth $303 million.

All Bren’s suit reveals about the terms was that “Mel received substantial consideration … including, without limitation, the termination of his continuing obligations to fund losses and answer mandatory capital calls, a release from personal guarantees” and the right to a cut of proceeds if the team were sold. It does not specify that Herb paid cash to Mel.

Asked in his deposition whether there were “any outside advisers brought in to check on the economics” of the deal, Jacobson said, “No, not that I am aware of.”

John Porter, a partner at Baker Botts in Houston representing Bren, 74, declined to address specific questions, citing “several confidentiality orders in place in our case that impact our ability to respond.”

David Herzog, a partner at Faegre Baker Daniels representing Herb, 81, and the Pacers, did not respond to requests for comment by IBJ’s deadline. Salyers also did not respond.

According to Bren’s lawsuit, Mel in 2007 had approached Herb about selling the team, saying he was tired of infusing millions of dollars into the franchise to keep it afloat and frustrated over the team’s negative image in the wake of the infamous November 2004 brawl in Auburn Hills, Michigan.

“I realize that Herb has a personal problem with the sale of the Pacers emotionally, but I am looking at the facts,” the email says, citing the potential for higher capital-gains taxes should Barack Obama win the presidency, the likely impact of the worsening economy on the team, and the fact that all the other teams in the Eastern Conference had improved “except for us.”

The email included references to the Pacers’ operating profit and revenue, as well as ticket sales and debt—unlikely details for Mel, who, according to a lawsuit filed by his children in 2010, was suffering from dementia and other debilitating conditions by then.

Apparently suspicious that the email came from an adviser to Bren—a critic of the team who in her suit calls the Pacers during that period “a civic and family embarrassment”—Herb responded, “Who wrote this? Very sneaky.”

Because Herb wasn’t interested in selling, the brothers and their advisers began months of back and forth to fashion a split. In March 2008, Jacobson emailed a Katz partner about the discussions, saying, “I’ve had some more than interesting meetings with the family regarding the Pacers. … Decidedly one for the record books.”

Asked in his deposition to explain what he meant, Jacobson said Mel and Herb “can go at each other, and at the end of the day, they’re going to hug and kiss each other as brothers. That’s the way they acted as a family.”

The IRS will get its hands on even more internal documents if it prevails in a standoff with the team, which so far is fighting a records subpoena from the IRS it considers overly broad and burdensome.

The agency says it needs those records as part of its leave-no-stone-unturned analysis of what the team was worth when Mel and Herb struck their deal. The IRS says it has hired valuation experts who will need to review everything from ticket sales and player contracts to media contracts and naming-rights deals.

James Weaver, a Justice Department trial attorney representing the IRS, said in court filings that he obtained Salyers’ “probably not a market deal” email from Bren Simon during the discovery process but needs Pacers documents as well to flesh out the exchange.

“Nothing in that e-mail chain suggests that Herbert Simon disagreed with that characterization,” Weaver wrote. “That said, Herbert Simon’s e-mails have not been provided. Understanding Herbert Simon’s contemporaneous reaction to this statement … is directly relevant” to the case.•