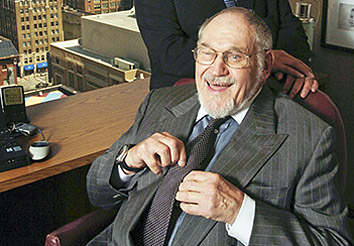 The legal fallout stemming from Melvin Simon’s decision to unload his half of the Indiana Pacers to his brother Herb just a few months before his September 2009 death is getting crazier by the day.

Mel’s widow, Bren Simon, got the public spectacle rolling in March 2015 when she sued the IRS in an effort to overturn the agency’s determination that the terms of the deal were so tilted in Herb’s favor that Mel essentially gave him an $83 million gift.

That conclusion left Bren with a $21 million gift-tax bill, which she paid under protest but hopes to get refunded by winning the suit.

Bren’s decision to fight the IRS now is causing untold hardship for the Pacers—or at least that’s the posture the team is taking in response to subpoenas issued by the IRS for documents that would help the agency understand the ins and outs of the 2009 transaction.

A new court filing reveals the Pacers—along with Herb Simon, his son Stephen Simon, Pacers adviser Donnie Walsh and their law firm, Faegre Baker Daniels—have been fighting for months over what they view as overly broad subpoenas issued by the Department of Justice’s Tax Division, which is representing the IRS in the case.

The filing says the Pacers Group has made headway negotiating with the IRS to narrow the requests. But talks have stalled over the team’s request for a protective order that would ensure the confidentiality of sensitive documents.

One legal observer said the protective-order provisions the Pacers are seeking go far beyond the norm. One would give the team the right to designate Pacers-related records submitted by third parties as confidential, not just the records they submit. The other would prevent the IRS from sharing the information with other government agencies—a restriction that would prevent it from making criminal referrals if it finds evidence of a crime.

It’s not clear why the Pacers Group raised that issue, because its attorneys at Faegre Baker Daniels hastened to add in a court filing that “the Pacers Group hasn’t committed any crimes.”

“The IRS refuses [to add the provision]. It says it is required to share information if it thinks that there is evidence of a crime,” the attorneys wrote.

The IRS as a matter of course considers whether instances of underpayments of taxes justify criminal referral, attorneys say. The legal line between an innocent mistake and tax fraud is the “willfulness” of the conduct, according to the blog run by the tax-litigation firm Hochman Salkin Rettig Toscher & Perez in Beverly Hills, California.

The positions of the two sides are spelled out in a motion Pacers Group attorneys filed in federal court in the team’s hometown of Indianapolis on June 15 that took the unusual step of asking a judge here to excuse the Pacers Group from responding to subpoenas unless the Colorado court enters a protective order with the language it favors.

The IRS shot back June 29, asserting that the group’s request was “unprecedented and inappropriate.” The agency said it had successfully negotiated more conventional protective orders with both the NBA and the Pacers’ CPA firm, Katz Sapper & Miller, and in fact already has deposed eight current or former KSM accountants.

The IRS objected to giving the Pacers Group “veto power” over the confidentiality of team-related information submitted by other parties, and said it would not agree to restrict the ethical obligation all government employees have to report fraud, waste and abuse.

Further, the agency said it was indefensible that the Pacers have yet to provide any documents in response to the subpoenas issued by Bren Simon and the IRS in the Colorado case.

Attorneys for the IRS wrote: “Not every single requested document can be ‘confidential,’ nor can the Pacers Group actually be concerned that every requested document might prompt Department of Justice attorneys to refer criminal activities to proper authorities—an apparent sticking point in reaching an agreement for a protective order.”

In the June 15 filing, the Pacers Group asks the court to order Bren Simon and the IRS to pick up the tab for the more than $100,000 it has spent so far. “These expenditures were required, in large part, because the parties served duplicative and overly broad subpoenas and refused to agree to the entry of a reasonable protective order.”

The IRS, however, scoffed at picking up the expenses, calling them unreasonable, unsubstantiated and self-inflicted. “It is the Pacers Group, and their counsel, who bear the blame for any costs they may have incurred along their meandering path to the courthouse door.”•