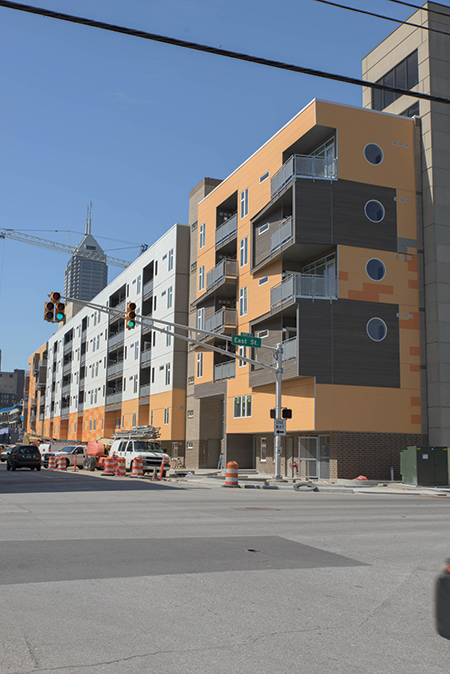 Mayor Joe Hogsett’s administration is mounting a controversial effort to expand the downtown tax-increment-financing district to help spur development in two areas that city officials believe are ripe for growth.

They’re targeting the former General Motors stamping plant site on the west side, where development plans have stalled, and the upstart Market East District on the opposite end of downtown. The latter is already beginning to benefit from several apartment projects and the construction of Cummins Inc.’s distribution headquarters.

“These are two unique opportunities,” said Emily Mack, director of the city’s Department of Metropolitan Development. “There is nothing in the hopper. This is just understanding that these are two areas ripe for transformative and catalytic development.”

Tax-increment-financing districts capture incremental property-tax revenue generated by new development to pay down debt issued to spur economic development projects. Since the downtown TIF was created in 1982 to kick start the rebirth of the urban core, it has helped fund a long list of developments—from Circle Centre mall to Flaherty & Collins Properties’ $121 million apartment tower going up on part of the former Market Square Arena site.

The process of expanding the downtown TIF would start with a resolution to be considered by the Metropolitan Development Commission on Oct. 5. If approved, the measure would be introduced to the City-County Council on Oct. 10, followed by a vote on Nov. 14.

But persuading enough City-County Council members to support an expansion could prove challenging.

Officials from the previous administration unsuccessfully pushed for an expansion that would have included properties in the Market East District, said Adam Collins, who served as Greg Ballard’s last deputy mayor of economic development.

“From an overall perspective, we were all on the same page, that it made sense to capture those revenues,” he said. “However, some of the Democrats on the council wanted to put politics ahead of fiscal policy.”

Ballard, a Republican, frequently used TIF dollars to support projects he favored. Under his administration, the city spent more than $160 million from 2010 until he left office from the downtown TIF on one-time projects, including shoring up the Capital Improvement Board budget to paving IUPUI roads. The spending spree created the perception that the downtown TIF was nothing more than a “slush fund,” said Zach Adamson, a Democrat who serves as council vice president.

The balance of the TIF at the end of the year is expected to be $8.4 million, with $4 million already dedicated to other projects. The taxable value of the property in the TIF is nearly $2.7 billion. That should generate $72 million this year in incremental property tax revenue, according to city figures.

The TIF-expansion effort marks Hogsett’s first big downtown push. Since taking office in January, the 59-year-old Democrat has focused on restoring neighborhoods and has stuck with his campaign promise to avoid benefitting “downtown insiders.”

“This is forward-thinking, to press into the neighborhoods,” said Angela Smith-Jones, the city’s deputy mayor for economic development.

But it’s not clear how the plan will be received by the council, which the Democratscontrol 13-12. Despite the Democratic majority, Adamson isn’t ready to provide his unabashed support.

He said he generally opposes efforts to ex-pand the TIF because it’s the only one of the city’s 18 districts that doesn’t expire. “Without knowing the details, I’m just really leery of continuing to tie down all this property tax revenue forever,” he said. “I like limits.”

Adamson voted “no” the last time the downtown TIF was expanded, in 2012, which brought in areas to the northeast and northwest, to support redevelopment of the Massachusetts Avenue fire station and a high-tech corridor along West 16th Street.

“Those are both commercial areas,” Adamson said. “The stamping plant, we’d be trying to create it from scratch, which isn’t necessarily a bad thing.”

At the site of the former plant, which fronts West Washington Street, TIF funds could be used to build basic infrastructure such as sidewalks, streets and pedestrian bridges, Smith-Jones said. 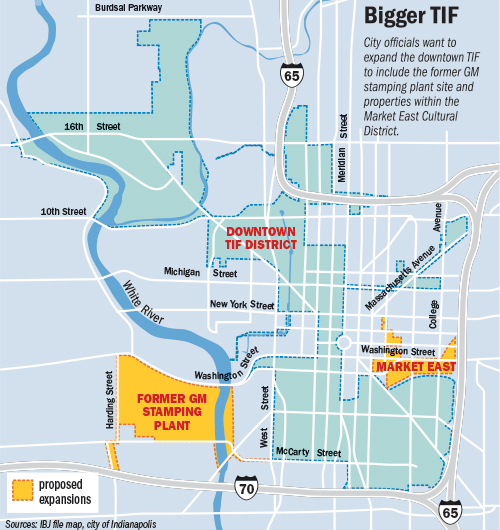 RACER is set to begin taking requests for proposals in November following two failed attempts to redevelop the site.

The land became available after RACER terminated its contract in June with REI Investments, a Carmel-based developer that had planned to build a $30 million, 10,000-square-foot concert amphitheater on half the land. REI couldn’t secure financing.

As of early last year, plans appeared on track for the concert venue to occupy the eastern half of the property and for then-Mayor Ballard’s $500 million criminal justice center to occupy the western portion. The criminal justice project later unraveled amid City-County Council opposition, and that parcel returned to the market. But the lack of availability of the entire site dampened developer interest.

In Market East, TIF money would be deployed to demolish several city-owned buildings to clear the way for new development, Smith-Jones said.

The jails and work release center are part of the plans for a new justice center. There’s no plan now to replace the facilities. The city might complete an analysis of space needs by the end of the year, though that might not recommend alocation for a justice center, Mack said.

The Market East TIF also would capture the Old City Hall site at the northwest corner of East Ohio and North Alabama streets, where the 21c museum and hotel is slated to be built.

The TIF expansion, however, would exclude the new $30 million Cummins building. The project is excluded because the Columbus-based engine maker already has received a subsidy in the form of a 10-year tax abatement that will save it $4.34 million in property taxes over that period.

Development in Market East began to gain momentum with Milhaus Development LLC’s 2013 Artistry apartment project within the former Bank One Operations Center along South East Street between East Washington and Market streets. The company followed with a second phase, under the name Mentor and Muse, and is finishing the project with 52 more units that will wrap around an existing city-owned parking garage.

On top of that, Bloomington developer Sib Sheikh wants to build 69 units and 3,400 square feet of retail space on the surface lot at the southeastern corner of Market and East streets, east of Artistry. His plans soon will go before a Regional Center hearing examiner.

Expanding the downtown TIF to include Market East and the stamping plant site is key to ensuring progress continues, Mack said.

“These areas are on the edge of market momentum,” she said. “But to encourage economic development, expanding the downtown TIF may help remove the obstacles.”•