It’s difficult to imagine a chain Tex-Mex restaurant generating much excitement these days. After all, isn’t there already a no-surprises Don Pablo’s, On the Border, or Abuelo’s—or a Los Rancheros, La Hacienda or El Rodeo—within peso-tossing distance of just about every home in central Indiana? 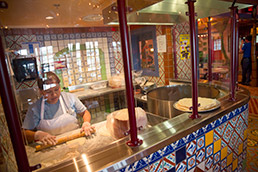 Yet crowds are flocking to Chuy’s (14150 Town Center Blvd., 773-7733), the newcomer to Hamilton Town Center. And after a hearty lunch visit—complete with a back seat full of leftovers—I get it. Kind of.

Brassy and boisterous, Austin, Texas-based Chuy’s (pronounced “chewy’s”) is anything but subtle. Salsa and chips are dispensed from a tailgate-ready car trunk. Tortilla-making is a spectator sport. Wacky T-shirts (for sale, of course) are prominently displayed. One room’s ceiling is covered in hub caps. Deliberately uneven tile in bold colors adorns the walls. Eclectically clad staff seem to be bumping into one another everywhere while reciting their faux-casual script. Kids yell. You get the idea.

But the food is abundant, attractive and, for the most part, at or above what I’d expect from Chuy’s chain brethren. Thin chips—and equally thin salsa—were unexceptional, but the Tortilla Soup ($4.29) was a surprising winner. What looked like an excess of broth actually turned out to be its strong suit. Unlike other restaurants that pile in shredded chicken and tortilla strips, then bury it all in sour cream, Chuy’s showed remarkable restraint. The result was worth savoring. 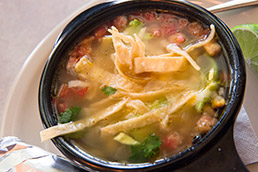 Shrimp & Cheese Chile Rellenos ($9.99) stuffed a fire-roasted—but mild to the point of invisibility—Anaheim pepper with the title ingredients and tomatillo sauce. Better was the Elvis Presley Memorial Combo ($10.89), tying together a beef enchilada, cheese enchilada, chicken tomatillo enchilada and a ground sirloin taco. For sides, green-chili rice is offered as an alternative to the standard Mexican rice, and charro beans can replace the usual refried. Six house-made sauces are available for dipping and dousing.

Speaking of Elvis, we also tried the Elvis Green Chile Fried Chicken ($9.79) and, surprise, there’s pleasure to be had in a tender chicken breast breaded with Lay’s potato chips. It somehow managed to stay crunchy and was nicely complemented by the chile sauce and cheddar cheese.

No, I didn’t know what the Elvis/Tex-Mex connection was, short of his appearance in the 1969 movie “Charro!” But a bit of homepage homework indicated that, while scrambling for cheap décor for their original location, Chuy’s founders covered a blank wall with velvet Elvis posters. Now you know.•