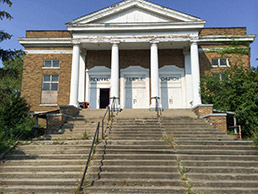 The downtown Phillips Temple fell into such disrepair that it seemed destined for the wrecking ball—until Van Rooy Properties stepped in to rescue the historic structure.

The redevelopment includes 16 apartments in the temple that Van Rooy finished in September and 24 additional units in a building under construction at the rear of the property.

Built in 1924 and recognizable by the four towering white columns at its entrance, the temple served Phillips Temple CME Church until the congregation moved in the 1990s. But time and recent vacancy had taken its toll.

Missing windows, a crumbling dome and a leaky roof rivaling a sieve topped its long list of defects. Van Rooy, however, saw enough in the structure to believe it could be salvaged.

Temple Lofts, as the property is now called, proved by far to be the most challenging project Van Rooy has undertaken in its 39-year history, based on the amount of time spent on a per-unit basis, said Russ Seiler, the company’s vice president of finance and development.

“Hundreds of gallons of water were coming in through the roof, but there were some solid steel beams we knew were in good shape,” Seiler said. “We just dug in and went to town.”

The result is an extensive rehab that once seemed unthinkable. Indianapolis Public Schools, the temple’s most recent owner, tried twice to demolish it to make way for more parking for the adjacent Crispus Attucks Medical Magnet High School.

IPS bought the building and adjacent land in early 2011 for $319,000. Two years later, the school district gave the building a reprieve, at the urging of Indiana Landmarks, when a couple of potential buyers surfaced. The deals fell through, but in late 2014 IPS again approached the city about demolition.

This time, after IPS once more agreed to seek proposals, Van Rooy beat out three competitors to purchase the building, paying $124,000 in August 2015.

“Even though Van Rooy wasn’t the party that was going to pay the most, they were viewed as the one that had the best proposal for the property,” said Mark Dollase, Indiana Landmarks’ vice president of preservation services.

IPS’ intuition proved correct. Of the 16 apartments in the temple, only three remain available after less than two months on the market. Units range from one to three bedrooms and in size from 800 square feet to 1,600 square feet. Monthly rents run $800 to $1,800.

Van Rooy’s ability to command those rents in an area where market-rate properties are rare is a testament to the uniqueness of the Temple Lofts project, said Abbe Hohmann, president of Site Strategies Advisory LLC. IPS hired Hohmann to find a buyer for the temple.

“Because IPS’ intent was to take it down, they did not put any maintenance into the building,” she said. “Van Rooy took on a big effort to save the building and repurpose it, and I think they’ve done a great job.”

With the flood of apartments coming online downtown, Van Rooy knew it had to rely on the temple’s architectural integrity to attract tenants, Seiler said.

One of the biggest obstacles was maintaining the large window panes, many of which were missing the original stained glass, and incorporating them into the design. Van Rooy teamed with local architectural firm MAS & Associates to create lofts with second levels to take advantage of the views from the windows. One-story units are tucked into the basement.

Because many of the original windows were missing, Van Rooy had to figure out how to divide the openings into smaller panes in order to install modern, conventional windows. 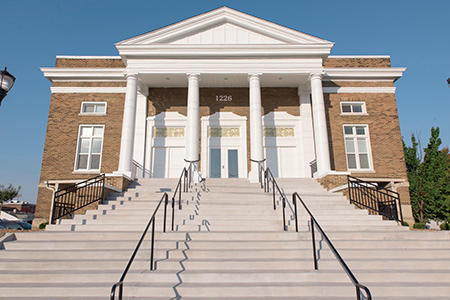 Temple Lofts includes 16 apartments in the renovated temple that were finished in September and 24 additional units in a building under construction at the rear of the property. (IBJ photo/Eric Learned)

“There aren’t too many units in town that are quite that architecturally significant,” said architect Mark Smith, owner of MAS & Associates.

Another problem confronting Van Rooy was rebuilding the crumbling front staircase. The developer wanted to put patios on the tiers to create common space, but Indiana Landmarks frowned on the idea, Seiler said.

So Van Rooy carefully repoured concrete section by section so as not to disturb the steel beams underneath that supported an outside foyer running between the staircase and the building.

While refurbishing the entrance, Van Rooy removed the wood placards above the three doorways spelling out Revival Temple Church, only to discover original transom windows underneath. About half of the glass panes had to be replaced, but the company salvaged as much of the original windows as possible, Seiler said.

Van Rooy also managed to save parts of the 25 original pews, many of which were rotted beyond use. The developer shipped them to a woodworker in Martinsville, who either cut them down to smaller versions now used as benches in the hallways, or returned the end panels that hang as wall pieces.

One goal Van Rooy couldn’t accomplish was converting the dome into an apartment.

“Our hope was to add a staircase to the dome and a unit, but we just couldn’t figure out how to get it done,” Seiler said.

Even so, Dollase at Indiana Landmarks is hard-pressed to find fault with the project.

“It was in deplorable condition,” he said, “and I give all the credit to Van Rooy for stepping up and investing in the neighborhood, and making it work.”

The temple was in such poor shape that Indiana Landmarks in 2013 placed it on the organization’s “10 Most Endangered” list. At one time, Phillips Temple was the largest African-American owned church in the state, boasting a seating capacity of 1,500.•