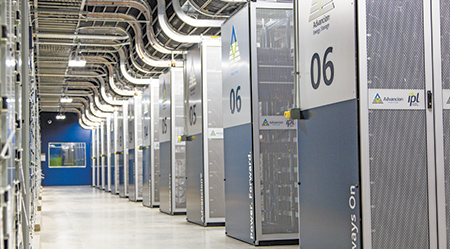 Indianapolis Power & Light unveiled its $25 million energy-storage facility in July, heralding it as the “first grid-scale, battery-based energy storage system” in this part of the country.

The batteries are stacked to the ceiling at the Harding Street power plant, row upon row of lithium-ion boxes, the same technology used in laptops and cell phones.

They’re designed to help match supply and demand of electricity, allowing energy companies to draw on battery storage during peak hours and reducing the need for plants to ramp up production for short periods of time.

But a dispute has broken out over the financial terms under which IPL connects that battery power to the grid. It’s a not-too-surprising turn of events given the reality that the technology is relatively new—much newer, anyway, than the rules in place for how utilities pay to connect to the grid.

IPL is now pushing to lower a tariff it pays a regional grid operator for connecting the new system to the grid—an effort that, if successful, would lower bills of customers.

The utility has filed a formal complaint with federal regulators against Carmel-based Midcontinent Independent System Operator, known as MISO, a private group that monitors the electrical grid through the Midwest and South and part of Canada.

It is seeking to have MISO’s open-access tariff declared “unjust and unreasonable, unduly discriminatory and preferential” because it doesn’t provide a way for the utility to be compensated for services it provides to the MISO system.

The complaint, published in the Federal Register on Oct. 31, does not say how much relief IPL is seeking.

“It’s not a large amount of money that would impact a customer bill to pay for the service,” said Lin Franks, senior strategist for IPL. “It is, however, a critical component to continued reliable service in electricity with more and more renewables and new technology, and more of the older, traditional, coal-fired units being retired.”

Making the matter somewhat rare is that some of the utility’s traditional opponents and critics are stepping up to agree with IPL’s case. That’s because, in some cases, it could encourage other utilities to use more renewable and alternative power sources, rather than so much traditional coal-fired power plants.

And in other cases, it could lower customers’ bills, at least a little.

“This is exceptionally important,” said Kerwin Olson, executive director of the Citizens Action Coalition. “Because of the intermittent nature of some renewable energy resources, batteries and storage technology are a critical piece to the grid of the future and the transition to clean and sustainable energy.”

He added: “We would hope that any additional compensation or financial benefits received by the company … would be shared equitably with the customers who have been footing the bill.”

IPL put the batteries into service in May. At the ribbon-cutting, IPL CEO Rafael Sanchez, said, “IPL is transforming its generation fleet and taking an all-of-the-above approach to create innovative energy solutions. The way IPL is diversifying its energy mix will significantly reduce dependence on coal while keeping costs competitive.”

Tim Stewart, a utility lawyer at Lewis & Kappes, which represents large industrial buyers of electricity, such as factories and shopping centers, applauded the company for the investment and said it should now reap the rewards—as should its ratepayers.

“Given that IPL has made the investment, we believe it is appropriate that it be fairly compensated by MISO for the services provided,” Stewart said. “Ultimately, proper compensation from MISO should reduce the cost of the investment to IPL ratepayers.”

The crux of the matter is that the new technology requires IPL to closely monitor how much electricity the storage packs inject or withdraw to the grid to manage something known as frequency control.

Electricity frequency control, according to the utility, is essential to grid stability. The U.S. grid is maintained at a standard, and when it deviates too much from standard, the amount of electricity that surges into a customer’s hookup can hurt equipment, from computers to appliances. If the frequency deviates wildly, it can get uncontrolled and even cause blackouts.

“This device, the lithium-ion battery that we built, can move much faster than a traditional generator can,” Franks said. “You can see that it can react much faster, and the customers are going to benefit, because it will take fewer megawatts to fix the system.”

IPL said it is not being paid for “this valuable service.” The technology is so new that regulatory rules have been slow to catch up, the utility said.

IPL is now asking the Federal Energy Regulatory Commission to take another look at the rules for some relief. The commission is set to begin technical hearings this month.

MISO officials said they are taking a close look at the issue and want to reach a solution.

“There are numerous discussions at both the policy and technical levels to determine the most efficient and effective ways to integrate the new technology, including storage, to the grid,” MISO spokesman Jay Hermacinski said in an email.

He said MISO held an energy-storage workshop earlier this year with utilities and others to try to “evaluate possible changes” to the tariff to accommodate new technologies.

So how much could an IPL customer save if the utility wins some relief? IPL said it doesn’t even have a figure yet, and the answer could depend on many factors out of its hands.

“Because we don’t have a payment structure, I can’t even estimate revenue,” Franks said. “I have no idea what FERC will determine is appropriate.”•