Indiana employers would be able to claim tax credits to offset costs associated with training and credentialing their employees under legislation being considered by the Indiana General Assembly.

“Employers know more than anyone else what they need from their employees and workforce,” said Stephanie Wells, director of workforce development policy and administration at the Indiana Manufacturers Association. “We think a tax credit incentive will help the employers drive [solutions to] what the workforce needs actually are.”

The idea is proposed in at least three bills making their way through the Legislature, although each proposes slightly different programs.

A House bill authored by Republican Sen. Todd Huston of Fishers—which has the support of Gov. Eric Holcomb—would provide a credit against state tax liability that would equal the lesser of $25,000 or 50 percent of a training program’s expenses. It would be available to employers who have 250 employees or fewer, as long as the training results in full-time employment for the trainees or a raise of at least 5 percent.

Huston said the tax credit portion of his bill—which also introduces other workforce development reforms—is still “evolving” as he continues to have conversations with stakeholders. But he believes “it could be a win for both businesses and workers.”

Employers are struggling to find help with “getting their existing workers trained and trying to find [new] pools of workers,” Huston said. “How do we meet employers’ needs and give employees the right skill sets they need for 21st century jobs?” 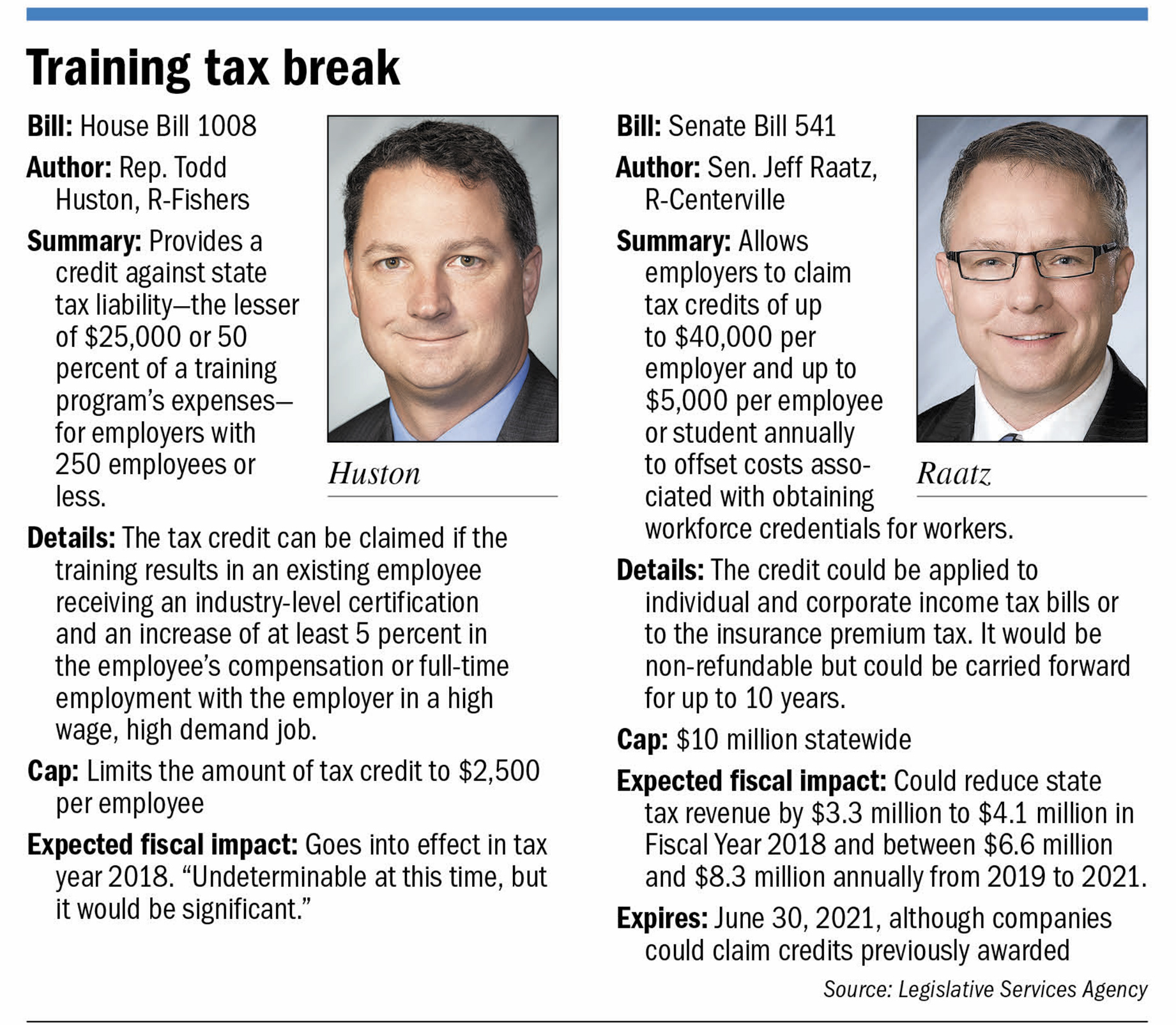 Meanwhile, Republican Sen. Jeff Raatz of Centerville is authoring a bill that would establish an employer training tax credit of up to $40,000 per year for expenses made on behalf of an employee to obtain workforce credentials in manufacturing, health care, information technology or logistics.

And Republican State Rep. Ed Clere of New Albany has a bill proposing a tax credit for employers when a current or former employee receives a qualified credential as determined by the state. But it does not require the employer to provide any assistance to the employee.

Raatz said he hopes a tax credit would inspire the expansion and creation of cooperatives and apprenticeship programs, with collaboration between businesses and credentialing providers such as Ivy Tech Community College or Vincennes University.

There are examples across the state of employers already working with higher education providers on their own to create homegrown training systems.

For instance, in Batesville, four firms—Hill-Rom, Batesville Tool & Die, Batesville Casket and Heartwood—have partnerships with Ivy Tech and Batesville High School for a program blending work and education, resulting in a pipeline of skilled workers.

“These models are worth expanding,” Wells said. “We think the tax credit would be a great vehicle to help smaller and more employers to join these programs.”

Mike Langellier, president and CEO of TechPoint, said he appreciates the conversation about developing a skilled workforce but urged new incentive programs to be “broadly applicable across industries.”

The Indiana Chamber of Commerce supports the tax credit concept. Bill Waltz, the group’s vice president of taxation and public finance, said it’s expensive for businesses to “invest time and hire a bunch of people.”

“If you have more money available to do that, it makes it easier for you to bring on more people, train more people than you’re doing now,” he said. “If you want more of something, you tax it less.”

But tax credits carry costs to the state. Huston’s bill would go into effect in 2018, with revenue impact starting in 2019. The nonpartisan Legislative Services Agency said in a report that the cost of Huston’s proposed credit—or the amount it will reduce state revenue—is “indeterminable at this time.” But, the report added, “it would be significant.”

But supporters say that if one of the programs becomes law and is successful, it could replace less-effective workforce development programs, saving the state money.

“Nobody wants these things to operate as a giveaway,” Waltz said. “If they see a program that works better, they would begin to pull back expenditures going to other programs that are not working as effectively.”

Huston and Raatz acknowledged their proposals are likely to look different as work continues through the legislative session.

The Senate Tax and Fiscal Policy Committee on Jan. 24 heard testimony on Raatz’s bill but didn’t vote. Raatz is hopeful the idea will advance in some fashion.

“Maybe we end up with one bill that deals with workforce development and this would be part of it,” he said.

Huston said he expects conversations about the tax credit idea to be ongoing.

“We want to get it right,” he said. “There’s a lot of good intent. We know we’re not going to fix it in one legislative session.”•