Federal stimulus funds and greenhouse-gas legislation have the potential to spark a green version of the Gold Rush. 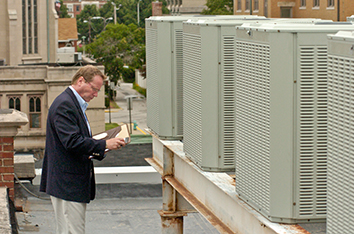 But environmentalism is more ingrained in corporate America, this time around. The
prospect of greenbacks for green energy products and services has a growing number of contractors seeing gold in solar, wind
and energy consulting.

“Truly, since the stimulus money was announced, we’ve heard from a lot of
these [companies]. I would call it a significant number,” said Eric Burch, spokesman for the Indiana Office of Energy
Development.

Among those panning for green gold are Antony Rhine and Richard Witka, managing partners of Indianapolis-based
Sestertii, which recruits workers for the utilities industry.

A few months ago, they created Sestertii Solar
Inc., a division to sell solar power systems engineered by Brighton, Mich.-based The Green Panel. Since then, they’ve
been making the rounds of customers attracted to solar for varying reasons.

“One is they want to save the
world. Two is to save money,” said Rhine of potential customers. Three is the perception that “it’s going
to get their customers’ attention” to be green.

Ultimately, it may be incentives under the American
Recovery and Reinvestment Act that clinch the deal. The incentives include renewable-energy grants for 30 percent of the cost
of solar or other renewable generation.

Sestertii Solar has yet to strike a big deal. But Rhine and Witka have
been busy making presentations. They’re also seeking partnerships with architectural firms and construction companies.

They’ve even pitched the idea of a towable solar array that construction firms could place at remote job sites
to power construction trailers and tools.

Helping pique interest in renewable power, in addition to tax credits
under the recovery act, is the almost-certain prospect of more expensive electricity from the grid.

Ostensibly
to reduce global warming attributed to human activity, a cause of warming not all scientists accept, the U.S. House of Representatives
recently passed for Senate consideration a so-called cap-and-trade bill aimed to discourage carbon dioxide emissions.

The American Clean Energy & Security Act would establish the trading of permits for the right to emit carbon. Some
utilities will invest in renewable power such as wind. But it and other renewable fuels are still more expensive per kilowatt
than coal to generate electricity.

Energy-intensive companies that didn’t give much thought to energy
costs before “are going to have to look at [implications],” added Rhine.

Or companies can hire someone like Jeff Ton to look at the energy implications.

The former
chief information officer of Lauth Property Group last January started his own firm, Confluence Dynamics. Ton conducts a comprehensive
analysis of a firm’s energy usage and tailors a plan to reduce it. He also offers workshops on green building techniques.

Ton estimates he will have shaved about $6,000 off the annual $130,000 electric bill of one of his clients. Part
of the solution was to consolidate a number of the client’s energy-gulping, heat-generating computer servers.

While at Lauth, Ton was involved in emerging technologies to bring energy efficiencies to buildings the commercial
developer built.

In this economic climate, many businesses don’t want to invest big bucks in energy-efficient
infrastructure, he said.

“But there’s still a lot of low-hanging fruit. You can drive the costs out
without a huge capital investment,” Ton said. “The hurdle is the perception it’s expensive, that you’re
pitching a retrofit.”

That’s in contrast to much of the glitter in sustainable building, such as
construction of LEED-certified buildings, short for the U.S. Green Building Council’s Leadership in Energy and Environmental
Design standard.

They can be an environmentalist’s dream. Keep Indianapolis Beautiful’s headquarters
in Fountain Square, for example, sports vertical wind turbines and cisterns to capture water for irrigation.

Such top-to-bottom projects are still the exception. So companies that can install renewable generation systems, such as Indianapolis
contractor Ermco, are also marketing energy-efficiency. At Ermco, it’s through the company’s newly formed “Green
Energy Group.”

The Ermco unit also scouts for business such as switching out a company’s fluorescent
lighting for more efficient systems, or installing sensors that shut off lighting when a room isn’t occupied.

Ermco conducts energy audits that can run 10 pages and provide details such as how long it will take for improvements
to provide a payback and an estimate of carbon dioxide reduction, said David Peterson, business development manager at Ermco.

He said the, “Let’s be simple about it” approach recognizes that many firms aren’t in the
mode to spend big money right now on projects such as a $12 million solar panel system for which Ermco recently worked up
an estimate.

Those lucrative jobs will come eventually, Peterson said. “Green is the buzzword. We’ve
always done it, but now it’s hot.”

Laura Arnold has
seen this before.

The president of the Indiana Renewable Energy Association remembers how the energy crisis and
policies of President Jimmy Carter in the 1970s helped spur renewable energy dollars. Arnold was a founder of the Indiana
Solar Energy Coalition, helped lobby for a state solar tax credit in 1980, and—while working for the city of Fort Wayne—helped
lasso a federal grant for solar retrofit of a fire station.

“We’ve been there, done that, got the
T-shirt,” she said. “There were lots of things going on at that time.”

Today, there’s
been an evolution to the extent renewable energy is part of a broader, “rather amorphous” green movement that
includes everything from organic cotton clothing to on-site power production, she said.

The IREA Web site sports
a surprising variety of contractors and installers of renewable energy generators, such as solar and wind units. A few, like
SunRise Solar in St. John, actually make renewable-energy products—in this case, solar-powered attic fans.

“There’s certainly a lot of interest. There’s a high curiosity factor, is how I’d describe it,”
Arnold said. “We still need to get over the hump. There are people who still think renewable energy doesn’t work
in Indiana.”

But in other states, there are believers, and that’s good for companies that sell product
outside the state.

“Our biggest sales are coming with states with [renewable power] incentives,”
said Bill Keith, president of SunRise Solar. “I sell more in New Jersey than in the state of Arizona.”

And Keith sells them in far-flung places, such as Hawaii, Israel, the French West Indies and Singapore. The company the
former roofer founded in his garage has zoomed to $4 million in annual sales from $39,000 in 2003.

The company
employs just five people, but contracts with Indiana manufacturers for components and assembly of its solar-powered vents,
which start at $495.

Keith said some of the companies he hires to provide parts and assembly are in the devastated
recreational vehicle industry. The Hoosier Environmental Council estimates that renewable-energy legislation could benefit
1,300 companies in Indiana.

“I’ve got to think that’s grossly understated,” Keith said.
“There are a lot of little industries [to benefit]. It’s like the space race. I kind of feel like we’re
at that point right now with clean-energy legislation.”

The HEC cites a report by the Renewable Energy
Policy Project, a Washington, D.C.-based lobbying group, that estimates Indiana has the potential to land 39,221 new jobs
and $6.3 billion in investment in renewable-energy manufacturing.

A traditional manufacturer with operations
in Bloomington and Logansport already has tapped into that potential.

Carlisle Industrial Brake and Friction has begun supplying to California-based Clipper Windpower, a maker
of wind turbines, the brakes used to control the swivel and turn of the modern-day windmills.

Now the company expects potentially 25 percent of its future product pipeline could be in wind power,
said Senior Sales Engineer Scott Eberle. He even gets questions from individuals building small wind
turbines (they’ll want to use Carlisle’s trailer-brake product line for those).

“The opportunities
for Indiana are really quite significant,” said Jesse Kharbanda, executive director of the HEC.•