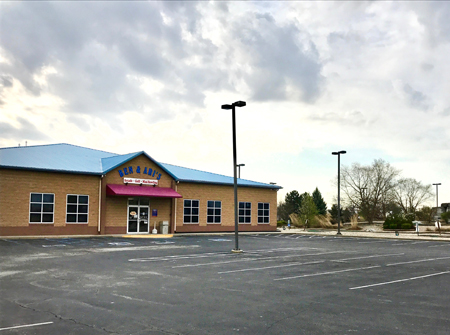 A family-friendly attraction in Fishers has closed after nearly two decades in business, making way for what is expected to be a used-car lot.

Ben & Ari’s announced late Friday that its last day of operations would be Sunday because the property along State Road 37, near East 141st Street,  had been sold.

Leonard and Robin Gurin opened the miniature golf course that they named Ben & Ari's after their young sons in August 1999. They later added an arcade, pizza restaurant, party rooms and duckpin bowling lanes in a 10,000-square-foot building. The business has hosted thousands of children's parties since its opening.

The 3.12-acre property at 13875 Trade Center Drive is expected to be turned into a used car dealership that could open as soon as this summer, Ari Gurin told IBJ on Monday, but he said he could not reveal the name of the buyer.

Gurin also declined to reveal the sales price for the property.

“It was a good offer at the right time,” Gurin said. “The deal actually came together really fast.”

Local real estate broker NAI Meridian had listed the property for $2.8 million and, in a flyer, said possible uses would be medical office, retail/showroom and general office. According to Hamilton County records from March 2016, the property’s assessed value was $1.4 million.

Gurin said a confidentiality agreement with the buyer kept the family from notifying its five employees or the public until Friday. The sale was finalized Monday morning.

“We loved working together as a family, and we loved that our work was to bring fun and togetherness to your family, too,” the family said in a email announcing the closure.