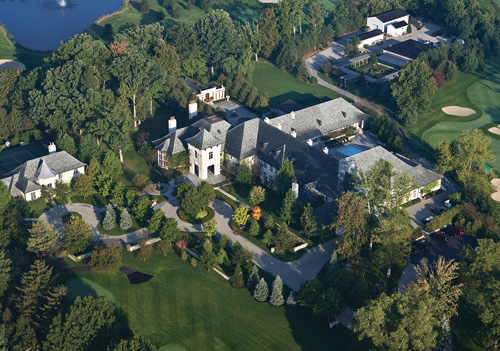 The widow of Mel Simon is donating her entire 107-acre estate in Carmel to the Great American Songbook Foundation—a gift valued at more than $30 million that the foundation plans to use to help it establish a major museum in central Indiana.

The foundation, in announcing the gift Thursday morning, said it plans to “leverage the donation toward its goal of creating a freestanding Great American Songbook Hall of Fame Museum, dedicated to the timeless popular music of Tin Pan Alley, Broadway and Hollywood.”

The estate, known as Asherwood, was the former home of Bren Simon and late husband Mel Simon, the co-founder of Indianapolis-based shopping mall giant Simon Property Group, who died in 2009. The property at 10110 Ditch Road includes a furnished 50,000-square-foot main house, an 8,000-square-foot clubhouse, a 6,000-square-foot guesthouse, several other structures and two golf courses.

The foundation, founded by famous performer and preservationist Michael Feinstein, is based at the Center for the Performing Arts in Carmel.
Foundation officials said Thursday that “the Asherwood property holds enormous promise as a potential museum site.”

“This is a historic moment for the Songbook Foundation and for our nation’s musical legacy,” Melissa Stapleton Barnes, chair of the foundation’s board of directors, said in written comments. “Mrs. Simon’s generosity represents a great leap forward in establishing a permanent home for the Songbook Archives, expanding the Foundation’s outreach and education programs, and creating an interactive visitor experience of international caliber.”

The foundation's mission is to preserve and curate artifacts related to creators, performers and publishers. It maintains an archive of more than 100,000 items related to pop, jazz, Broadway and Hollywood music at the Palladium in the Center for the Performing Arts, where it also presents small public exhibitions in its gallery space. The exhibit gallery takes up 500 square feet in the center and the archives use 4,000 square feet.

The foundation said staff and board members will begin work immediately to evaluate possibilities for the use of the donated property, starting with a comprehensive feasibility study.

“This gift is undeniably a game-changer for our organization, and it comes with great accountability,” Chris Lewis, executive director of the foundation, said in written comments. “We will proceed very deliberately and strategically to maximize its value as Mrs. Simon intended. We also recognize the interests of the residents and property owners in the area, and their input will be very important.”

Until recently, Asherwood was under contract to be redeveloped into an upscale inn surrounded by 100 custom homes. But local homebuilder Paul Estridge Jr. told IBJ in September that the development plans were on the ropes.

Estridge, who was partnering on the project with longtime developer Michael Browning, said the project was facing an uphill battle, hung up on covenants that restrict development in the area surrounding Asherwood.

Before Estridge and Browning got involved with the property in late 2016, Bren Simon had placed the estate on the market in 2014 with an asking price of $25 million.

“During my time at Asherwood, my fondest memories were when we welcomed guests into our home and hosted events to support causes we care deeply about,” Simon said in written remarks. “I am so pleased that Asherwood is now transitioning into a place that will support the Great American Songbook Foundation and be seen and used by the foundation, its guests and the public at large. I can think of no finer use than for Asherwood to become an asset to the Songbook Foundation and to support the mission of celebrating American music.”

The foundation last year became a cultural affiliate of the Grammy Museum, which was established in Los Angeles in 2008 as a partnership between the Recording Academy and entertainment company AEG. Its mission is to cultivate a greater understanding of the history and significance of music while paying tribute to our collective musical heritage.

The foundation said it plans to rely on the Grammy Museum to provide "expertise and assistance" in museum planning.