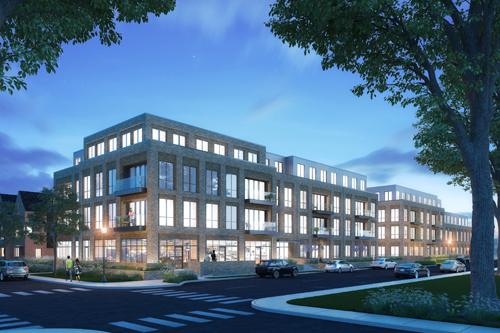 A Charlotte, North Carolina-based developer can move forward with his plans to build a residential and retail project in the downtown Chatham Arch neighborhood after a legal challenge to the development.

Marion Superior Court Judge Heather Welch on Monday ruled in favor of developer Paul Vezolles and the Indianapolis Historic Preservation Commission, which approved the project in May.

Her decision stems from a request from Chatham Arch resident David Pflugh, who lives at 847 N. Park St. He asked in June for a judge to review the variances granted by IHPC for the project, which calls for 55 condominiums in two four-story buildings along North East Street south of Ninth Street.

The development also proposes seven single-family homes and four townhouses situated on the other side of the same block, facing North Park Avenue–as well as 2,400 square feet of retail space along East Street.

To make way for the development, Vezolles will demolish the one building remaining on the nearly 1.9-acre property—a one-story former daycare center at 855 N. East St. that was built in the 1970s.

Welch’s decision paves the way for Vezolles to begin construction, hopefully in the spring, he told IBJ on Monday.

Pflugh lives directly across the street from the site and argued that his property rights would be prejudiced “by introduction of commercial use into a residential neighborhood, including the core of the historic neighborhood.”

But Welch said in her ruling that he has not demonstrated the type of grievance or harm required to show he has been “aggrieved.”

“Each of the arguments Pflugh makes regarding harm are harms that would be common to the community as a whole,” the judge wrote. “As Pflugh has failed to show the variances cause a special injury to him, he has failed to meet his burden of showing he has been aggrieved.”

The site where Vezolles plans to build was zoned SU-7, which only allows for charitable, philanthropic and not-for-profit use. IHPC granted Vezolles' request to rezone to the D-8 “dwelling district” with variances. One of the variances allowed for commercial development on the property.

The former zoning designation “saddled” the property with restrictive covenants that prevented the property from attracting a high-quality, residential use, Welch wrote.

Because the site cannot be redeveloped without the variances, Welch said, there is no feasible alternative to granting the variances.

“Further use of the old nursery school building for some nonprofit use would be out of character for the historic neighborhood and far outside the preferred use established by the [Chatham Arch-Massachusetts Avenue Historic Preservation Plan],” she wrote.

Editor's note: On Monday morning, IBJ posted a story online about the same project that indicated a judge had blocked the development plans. The story was erroneously based on a court document supporting Pflugh's petition and wasn't issued by the case's judge.