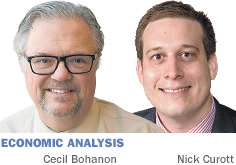 House Republicans, with the blessing of the White House, have introduced the Securing America’s Future Act (H.R. 4760) into Congress. If passed, the bill cuts the amount of legal immigration in half within a decade. As debates over restricting legal immigration are heating up, we sifted through the academic literature on the economic effects of immigration. Here are the most important findings.

The 26 million foreign-born workers in the United States constitute approximately 16 percent of the labor force and contribute $2 trillion to annual GDP. In any given year, newly arriving immigrants make U.S. output higher than it would otherwise be. It is estimated that this adds at least $36 billion to the living standards of those in the United States. Free movement of labor, just like free trade in goods, allows mutual gains through specialization and comparative advantage.

Immigration creates massive windfall gains for natives by raising the value of assets— for instance, every 1 percent increase in population due to immigration increases property values 1 percent. Immigrants benefit consumers by lowering prices—a 10 percent increase in immigrant laborers decreases the price of services like housekeeping or dry cleaning in a city approximately 10 percent.

Immigration, like trade and technological progress, requires incumbent workers to adapt to changing circumstances. However, there is no statistical relationship between the rate of immigration and the overall rate of unemployment. Immigration increases the supply of labor, but immigrants are consumers that increase the demand for others’ labor. Immigration also has little to no effect on the wages of the native-born population overall, though it slightly increases wages for educated workers and slightly decreases wages for those without a high school diploma.

Like with any policy, some benefit and some lose from immigration, but the overall effect is positive. Instead of restricting immigration, it makes more sense to use public policy to address the concerns of those hurt so the gains are spread more evenly among everyone. From a strictly economic standpoint, it would make more sense to double the amount of legal immigration than to cut it in half.•