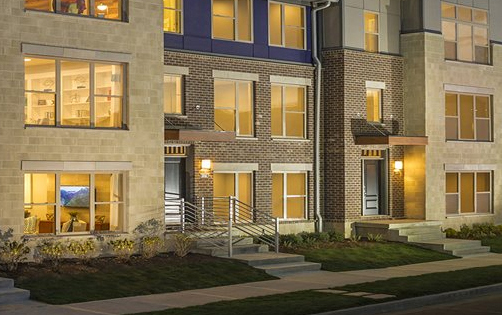 A Florida-based developer plans to finalize architectural plans next week before it seeks final approval for a proposed 31-townhome development near downtown Fishers.

Developers and city officials hope the project will help meet demand for housing in the Fishers’ Nickel Plate District.

Lennar Homes has been given the go-ahead by the city’s plat and Nickel Plate Review committees to construct the three-story homes on about 2.8 acres at 8210 E. 116th Street, near Holland Drive. The final plan still requires approval from the Fishers City Council, which could vote on the project as early as April 16.

The property is across the street from the Fishers Town Commons retail center, which includes Chatham Tap Fishers, Moe's Southwest Grill and Wild Ginger among its tenants.

The homes, called 116 Towns, would range from between 2,100 and 2,300 square feet and feature up to three bedrooms and bathrooms, said Lennar Indianapolis Division Chief Craig Jensen. Plans call for open kitchens and great rooms with large windows.

Planning department staff and the developers are scheduled to meet next week to finalize architectural plans, said Tony Bagato, Fishers' director of planning and zoning. Lennar has agreed to use a shallow-pitched 4/12 roof to lower the buildings' heights and to install more evergreens than usual as a buffer to neighboring properties to address concerns neighbors had about the development, documents show.

Altogether, the community will be comprised of seven buildings. City officials say the town homes will provide a transition between the commercial buildings on 116th Street and the single-family homes to the west, and create diverse housing options in the downtown area.

Jensen declined to give details about price range for the homes. Their design will be comparable to the Lennar Townhomes at Grand and Main in Carmel, about a mile from the Carmel Arts and Design District. Those homes range in price from about $278,000 to $340,000, according to the company’s website.

The homes in Fishers will accommodate buyers of all ages, from millennials looking to purchase their first home to seniors looking to downsize, Jensen said. Currently, there’s little availability for housing near the Nickel Plate District, and city leaders have encouraged residential development there.

“We think this will be a key project for continuing that,” Bagato said.

The neighborhood should be attractive to people who want to be within walking distance of numerous eateries and Holland Park. In addition, the homes are only about a mile east of Ikea and Top Golf.

“The major amenity is obviously the connection to downtown Fishers,” Jensen said.

Ashley Elrod, director of public relations for Fishers, said the homes will be about a five-minute walk from the municipal complex and the Nickel Plate Amphitheater.

Neighboring property owners were concerned about the height of the three-story homes, but city planner Dale Davis said the agreed-to modifications will ensure the buildings top out at no more than 36 feet.

While the plans adhere to the Nickel Plate District code, city officials have asked the developer to plant additional evergreen trees and other greenery as a buffer between the townhomes and the neighboring Sunblest apartments, Bagato said.

In Fishers, Lennar has also developed Silverton Estates, Bridger Pines and Whelchel Springs. Homes in those neighborhoods range from about $255,000 to $408,000, according to the company's website.

Miami-based Lennar became the nation's largest home construction company based on revenue when acquired Virginia-based CalAtlantic Group Inc. in a $5.7 billion deal that closed in February. The Fishers project was originally proposed by CalAtlantic.